FishfinderPro app – name your catch and know what you’re eating 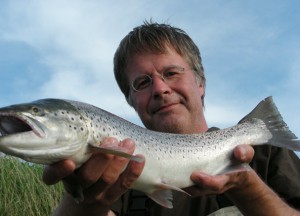 Sailors at sea are always looking for a bit of variety, at least as far as the menu goes. Often that variety comes in the form of a stroke of fortune – or misfortune, if you prefer to look at it from the fish’s point of view – with the fishing gear. Eating the catch is one thing though, identifying it quite another!

Hamburg-based fisherman and graphic designer OLIVER FRIEL has been working away patiently for years to help seafarers put a name to a face (or fillet). His book fishfinder names and identifies – in 25 European languages – 180 fish regularly found in Europe, grouping them by region for ease of use. Catching, preparing and, in due course, devouring fish need not be such an impersonal experience after all: from restaurant table to cockpit floor, with fishfinder you know who you are eating.

Thanks to the efforts of Oliver Friel, yachtsman and former layouter for German sailing magazine YACHT, and database and web developer Dr. Jens Teich Filemaker Engineer , the book is now also available electronically as the FishfinderPro APP. Sailors on shore leave in foreign parts need no longer feel quite so isolated: the rest of the menu may be a mystery, but with this new app in your pocket you can at least identify the fish on your plate. His number’s up anyway; the least you can do is get his name right!