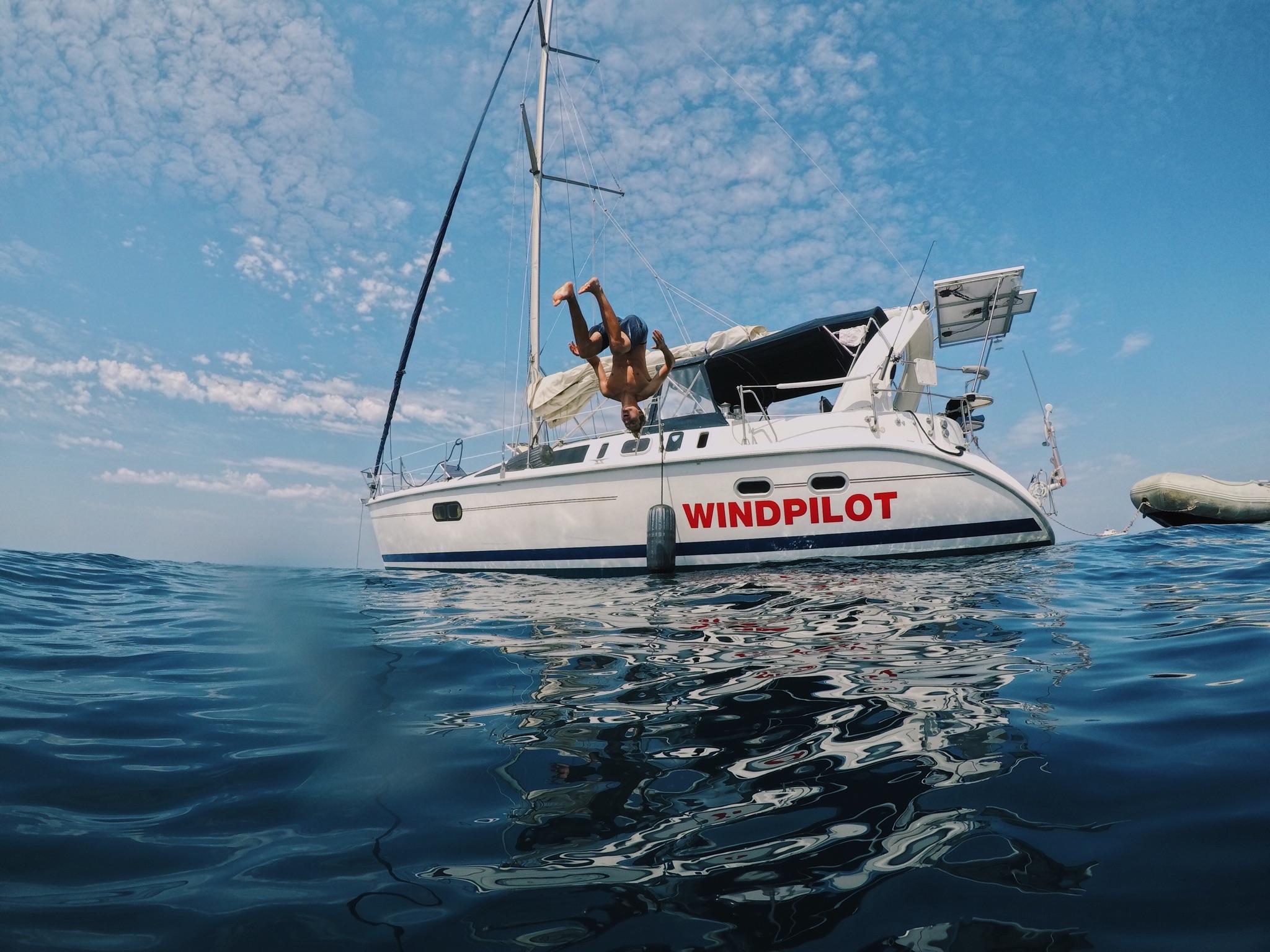 Who was in charge, who did the driving?
Who was the slave when the other was skiving?
(Or “navigating”, as they like to call it…)
The longer the voyage
and the smaller the crew
the fewer the options become:
It can’t have been the solo skipper,
no way, not him or her.
Was it mermaids? Walruses?
Davy Jones’ little finger?
Approaching the finish, there they stand,
proud in the moment, wheel in hand.
But never believe they steered all the way:
without their self-steering
they’d have called it a day. 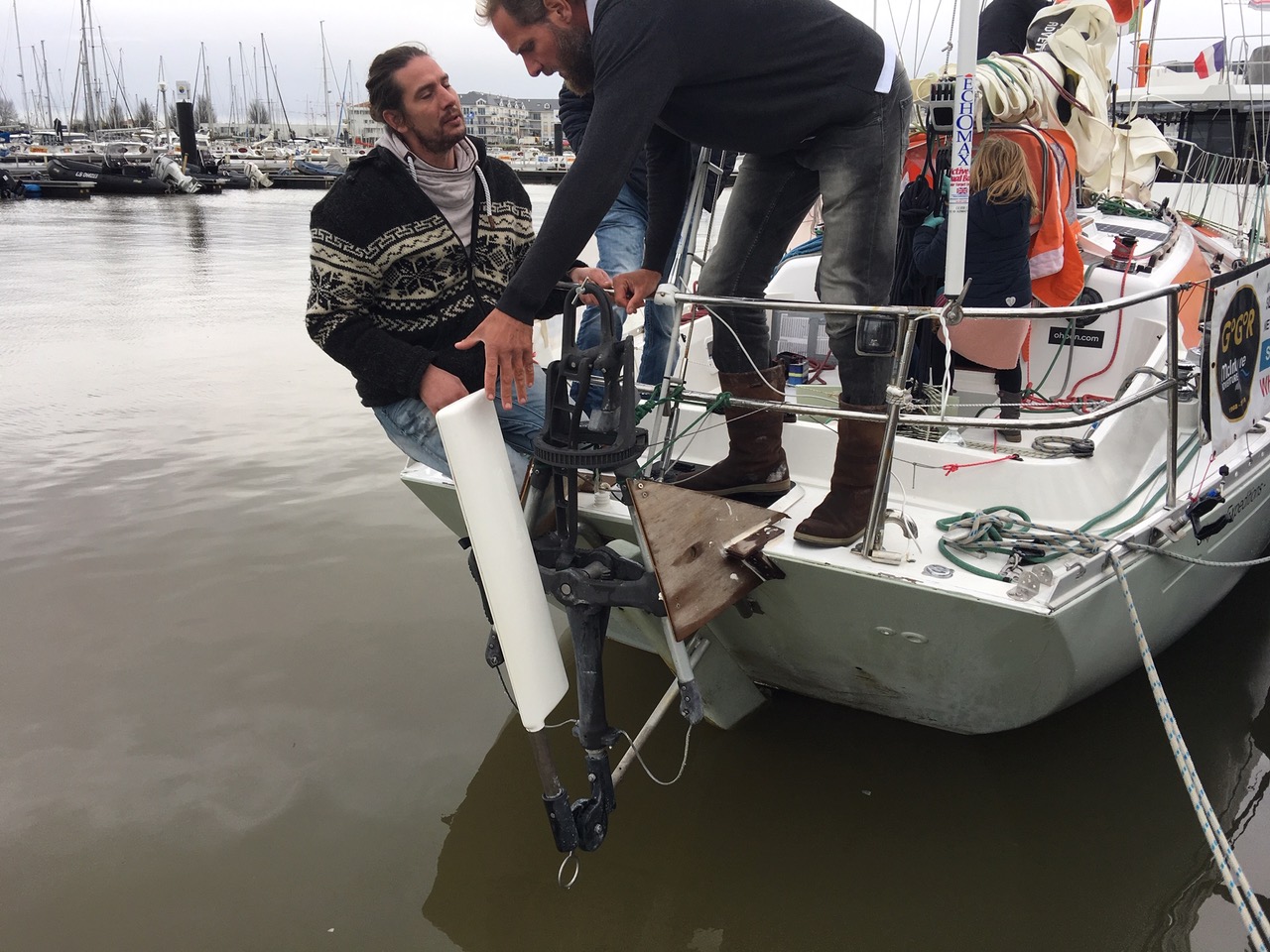 The first two champions of the GGR are back in Les Sables, with three further winners still on the way. Following my fact check at the halfway mark in Hobart, it’s now time to see what we can learn from the second half of the race. My particular focus, of course, will be on … No, I don’t need to say it again. 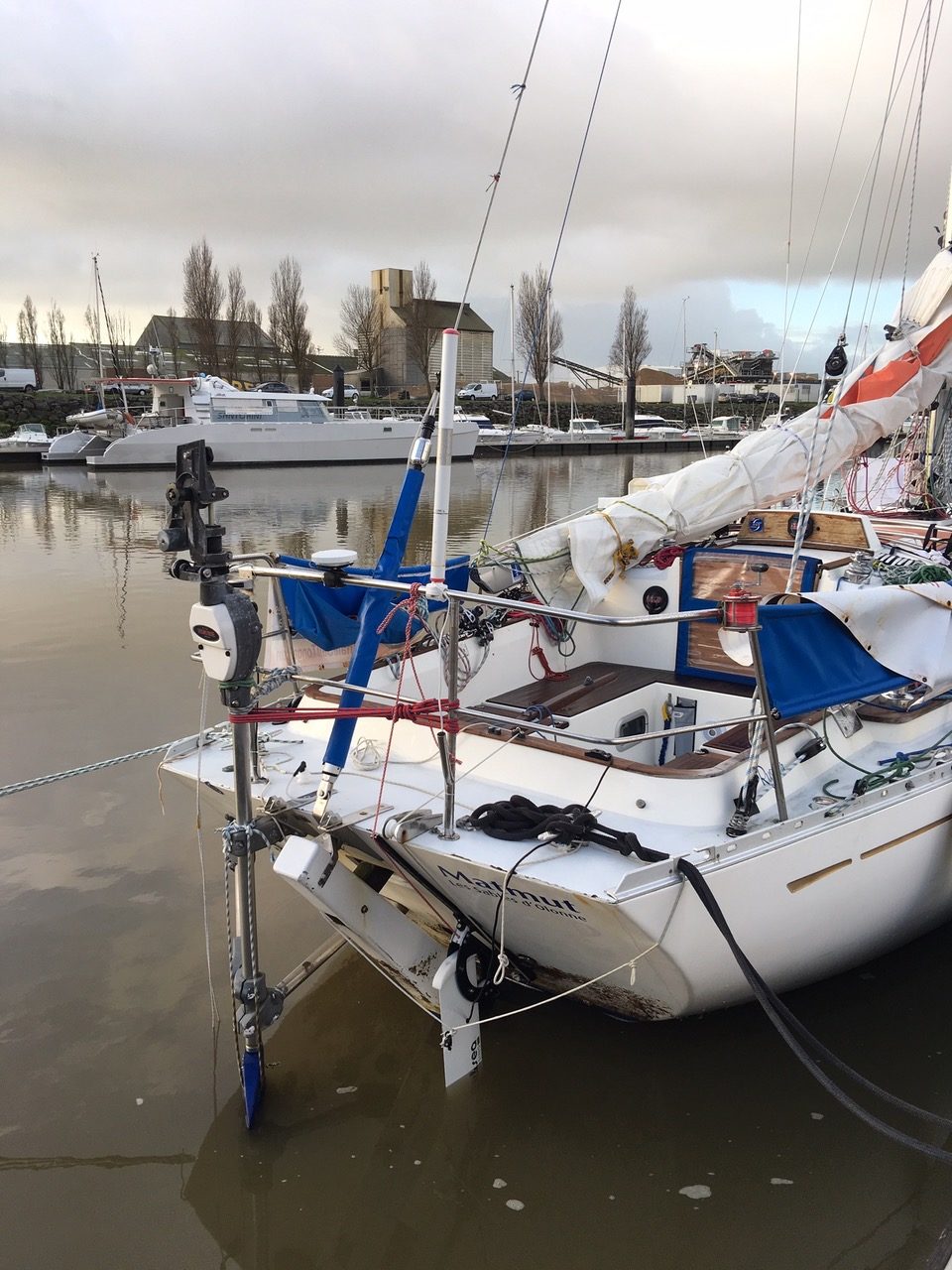 Jean-Luc and Mark arrived at the finish bright-eyed and buzzing with energy, adrenaline and joy. It was wonderful to see how two people who’d been 210 days alone at sea responded to the new challenge of being back among the rest of the species. Strong they looked, certainly, but also slightly unsteady as they sought, mentally as well as physically, to gain a toehold back on dry land. Actually, perhaps dry land wasn’t the answer: Jean-Luc and Mark both looked as though it wouldn’t take much more than a nap and a snack to set them up for a second lap… 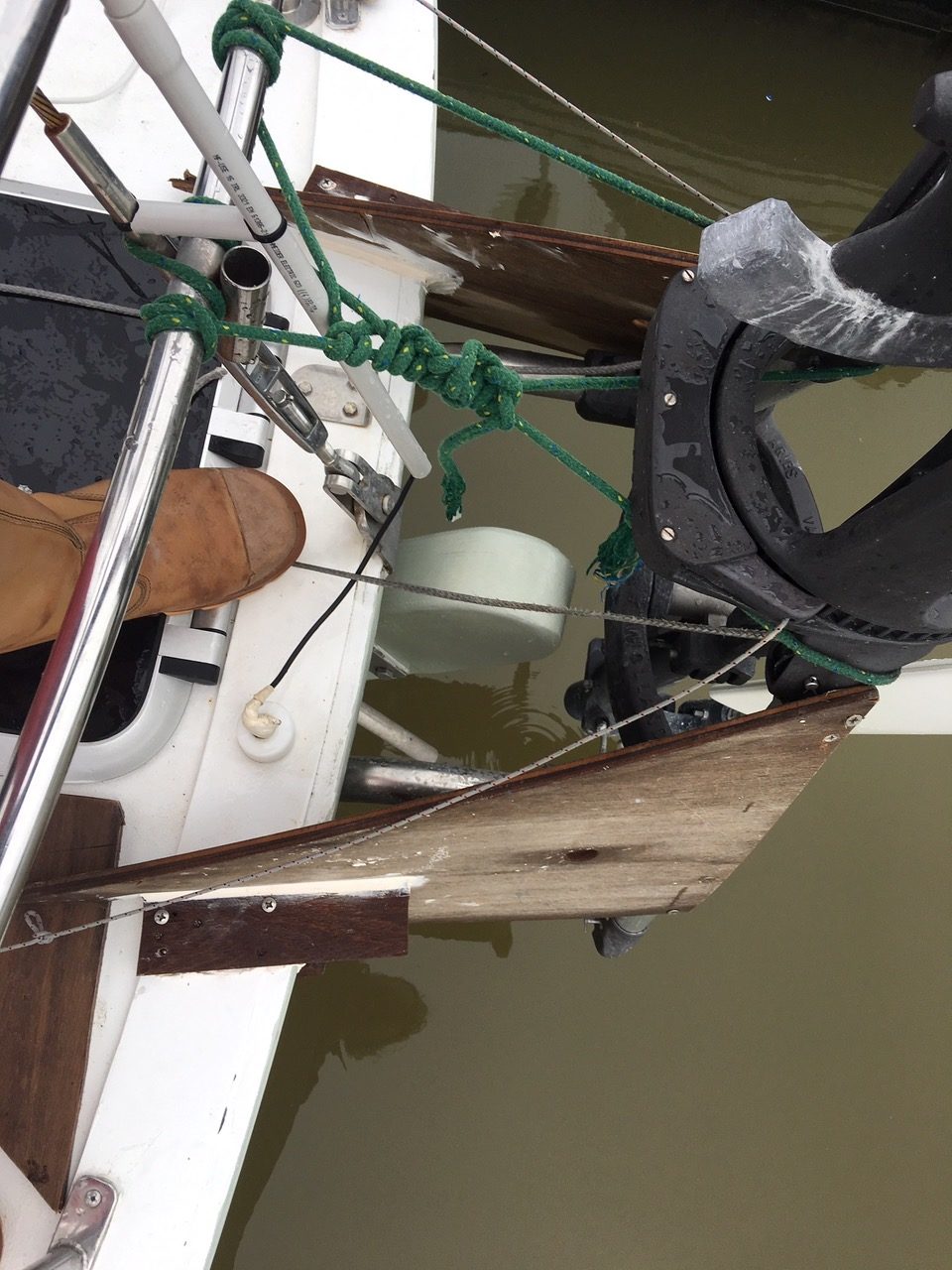 The two skippers may have been in fine fettle – and as communicative as ever – but the silent accomplices on their two transoms told a different story: here at the coal face, the challenges endured and the extreme nature of the voyage were plain to see. Mark’s Aries and Jean-Luc’s Hydrovane look as though they deserve a nice long stint of R&R. It is apparently only by the grace of rope and plywood that they lasted the distance, but last they did, and in a race like this one nothing else matters. They followed their orders and did their job – in all probability without a single harsh word from their masters, who both stayed well away from the helm for virtually the entire race. No doubt we will hear more about their experiences in this regard in due course.

It seems Mark could well have lost his Aries altogether had he not spotted the developing situation and quickly intervened. Sacrificing wood from the boat’s interior, countless screws and an unthinkable amount of Sikaflex, Mark fashioned his brave helmsmachine a reinforcing corset that held everything together all the way to the finish. 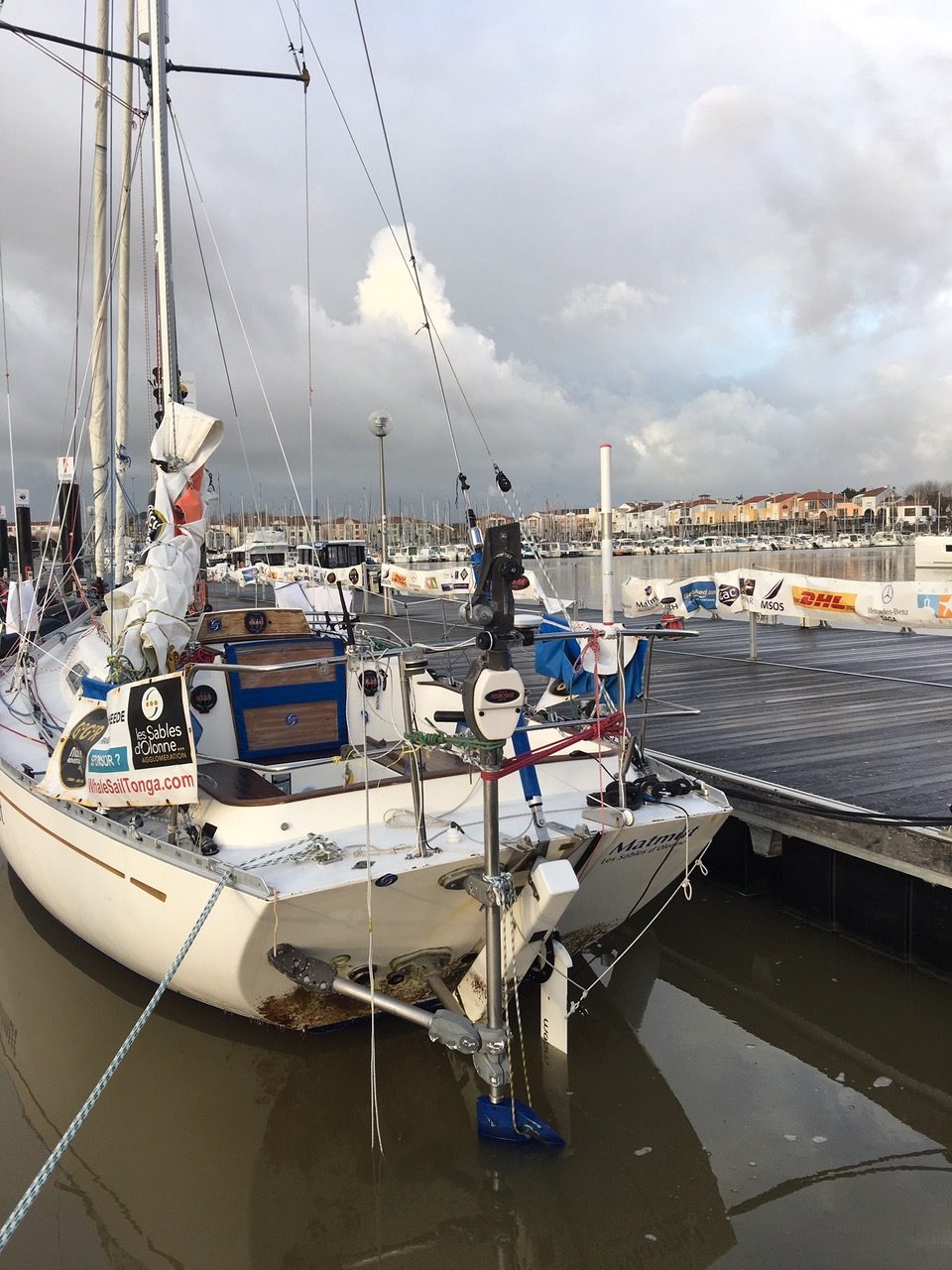 Jean Luc’s Hydrovane became the focal point of a veritable cat’s cradle of lines and lashings, without which it presumably would have been unable to go the distance. We learned of Jean Luc’s skill with rope in the early part of the race, when his auxiliary rudder could easily have been lost to the Atlantic (after the shear pin that fixes the rudder blade onto the shaft broke) had he not had the remarkable foresight to prepare for just such an eventuality by shortening the safety line attached to the rudder until there was no possibility of it departing. The wise old salt even had a miniature inflatable dinghy on board to help him fit the new shear pin (this particular pin sits only just above the waterline and would be out of reach from deck level). The safety line is still obvious in the pictures. 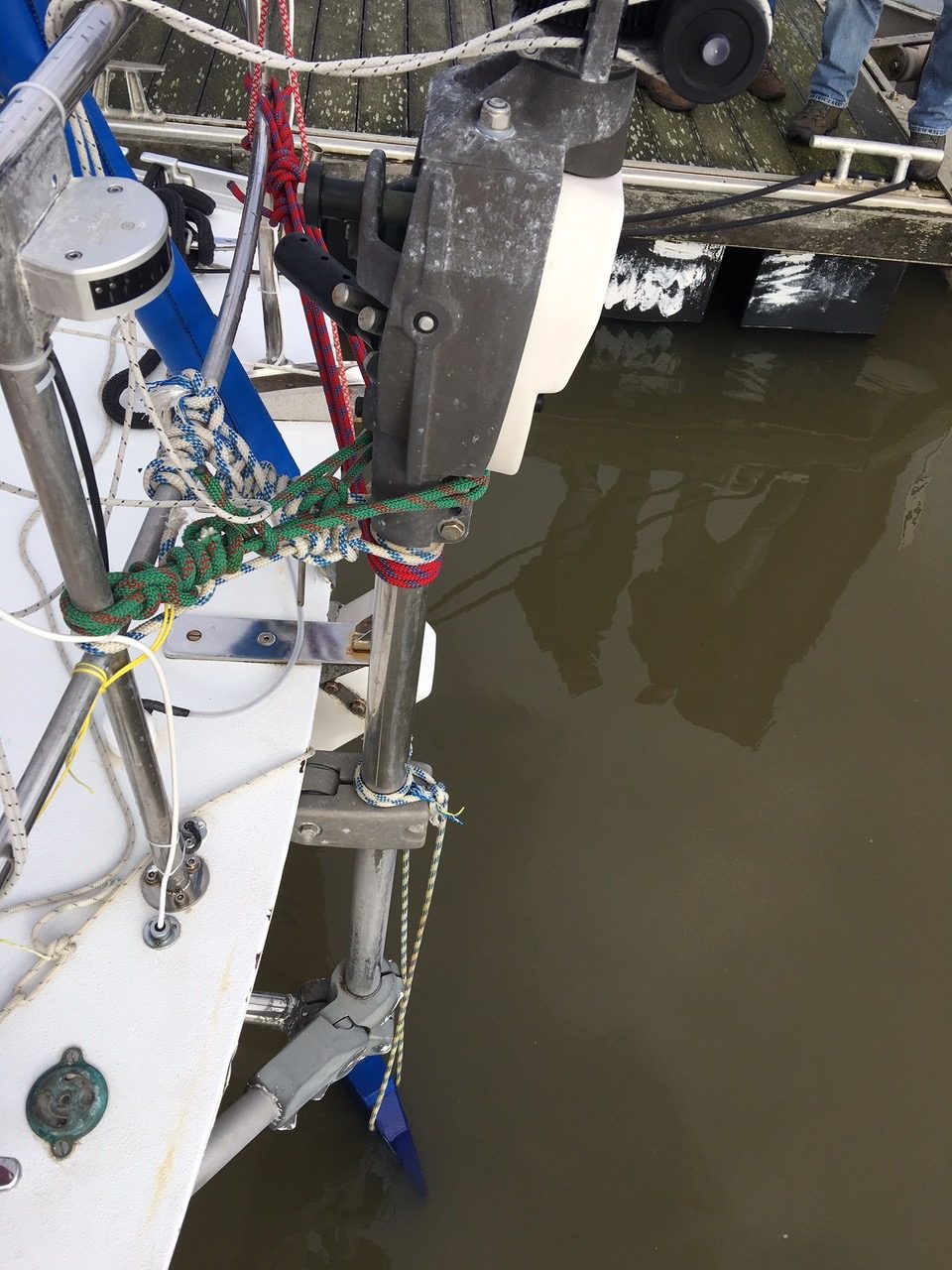 All that lashing on the upper part of the system suggests it must have encountered significant issues with vibration. And, as we all know very well, vibration can be the beginning of the end for any material.

In the case of Marc and Jean-Luc, man and machine became a solid team because they took care of each other and because the mechanical half of the relationship received the help and repairs it needed in good time and without fanfare. When Mark reported in the podcast on his Aries repair at sea, he simply gave an objective account of what happened and what he did without a trace of reproach or criticism. Jean-Luc breathed not a word during the race of the extra measures he had obviously had to take to avoid hard labour at the helm.

These two athletes represent the dream scenario for a windvane self-steering manufacturer: quite clearly, both recognised that they had a part to play in ensuring a successful and productive cooperation and they did so diligently and without any fuss. Theirs was a collaboration founded on mutual respect for a shared objective, namely to go all the way round without serving time at the helm.

The thought of not just one but two relationships that seem to be more or less the epitome of collaboration in my eyes is almost enough to make me jealous. Says the man who has been blamed for supplying self-steering so very powerful and dangerous that it actually (so the story goes) mashed the gears of a boat’s wheel steering system. Perhaps though I should be grateful that my Pacific has not also been blamed for its skipper’s water supply problems.

I live and learn – and not always gladly!