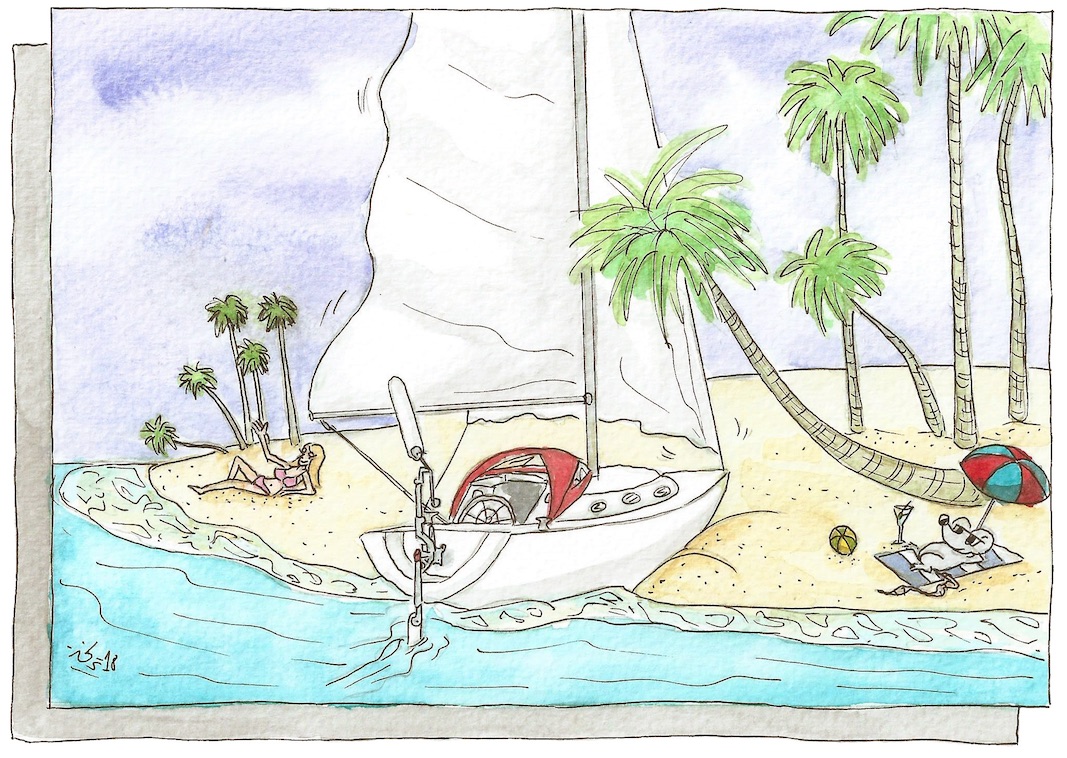 Bad advice – often euphemistically referred to in business circles as “a misunderstanding” – quickly becomes all too obvious at sea: a couple of nights under sail usually suffice to reveal any glaring mismatches between theory and reality. Such mismatches between theory and reality in the realm of windvane steering systems have truly hideous implications, because the boat always needs steering and if the mechanical solution can’t cope, the only other option is you.

I have enormous respect for any sailor prepared to recognise bad decisions, correct them and venture back out onto the seas again to do it all properly. It takes great strength of character to acknowledge our own mistakes, especially when the cost implications can be grave.

Now I find myself moving into more sensitive territory. I am of course just one of 30 manufacturers worldwide, but I believe the extent to which my company’s designs and features have been “interpreted” by others in all kinds of different countries sets it quite apart in the market. Rather than remaining in a state of constant agitation about this I have chosen to take it as a compliment: that so many of my competitors have “found inspiration” in my product concepts suggests I am probably on the right track. Price is not everything either, not when there are critical technical differences with critical implications to consider and not when resale value depends on the strength of demand. This, unfortunately, is a lesson poorly-advised sailors continue having to learn to their cost. 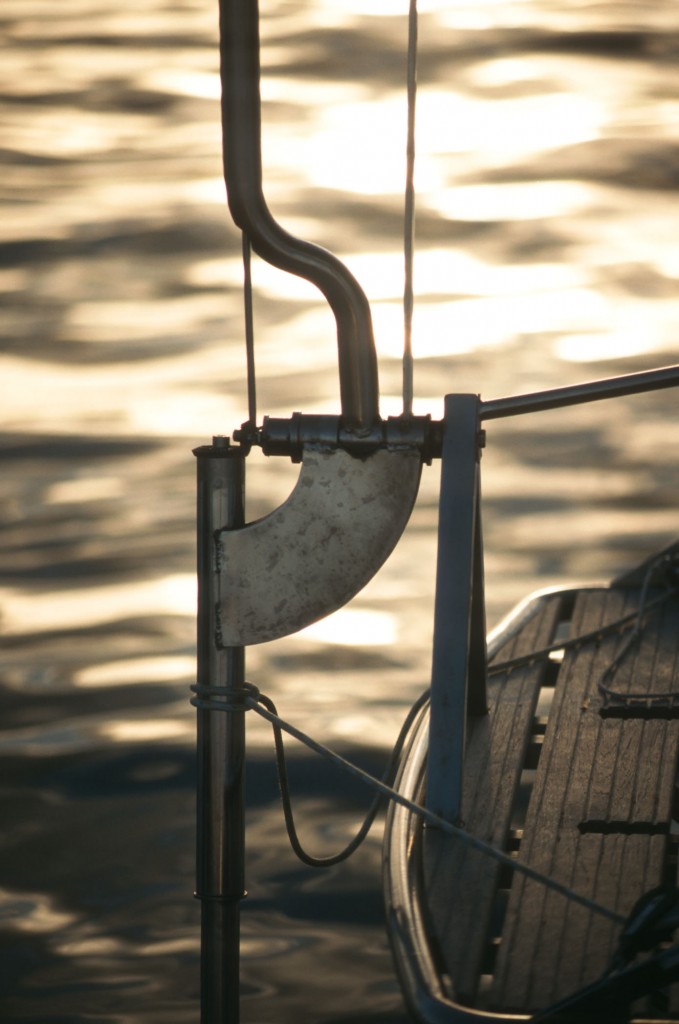 COPYCAT DESIGN
DIY or professionally built, outsourced or made in the EU, copycat producers cannot escape the rules of the market, which operate worldwide. The necessary conditions for global success today are:
– continuity in the marketplace,
– an appetite for innovation,
– a modular, technically refined product,
– proper customer service from start to finish and
– a brand that combines all of the above.
Germany’s smallest global market leader, we keep ourselves competitive at the international level by using industrial manufacturing approaches. This is the reason I still sleep soundly at night, at least this and the knowledge that word of mouth carries great weight among sailors – and comes for free to those who play by the rules and give their customers a platform to report.

Presented below are a few examples of people who bought once, had a change of heart for whatever reason and then bought again. 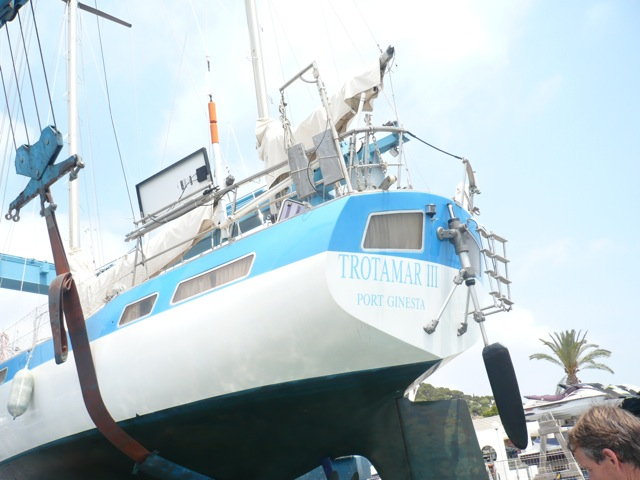 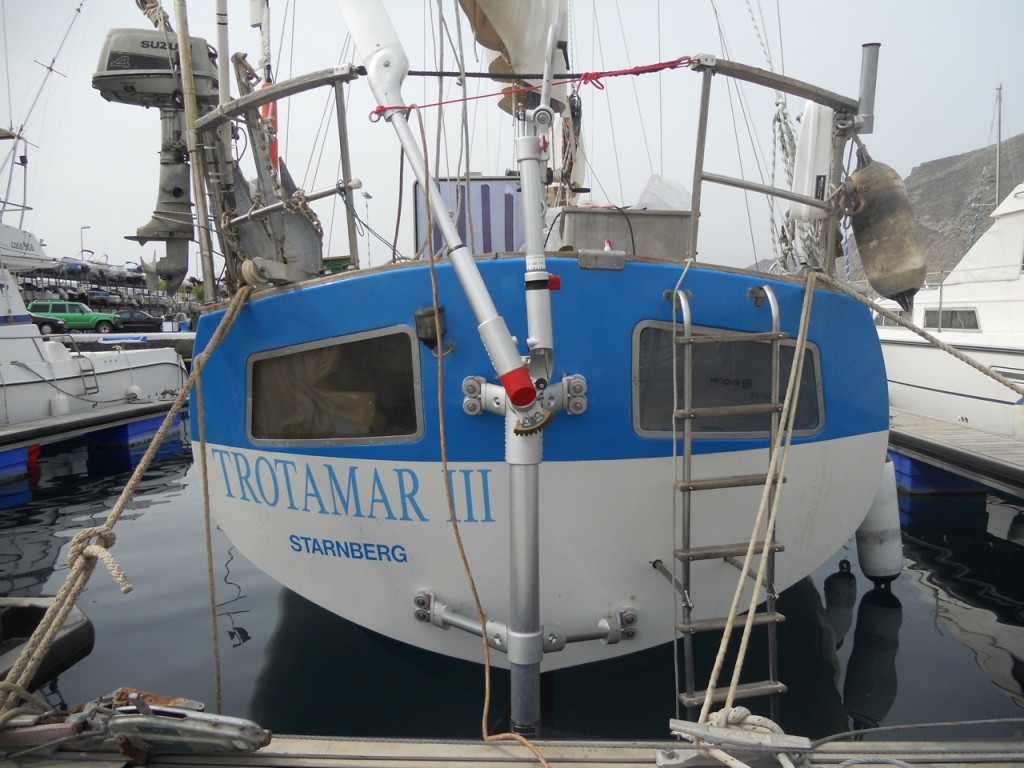 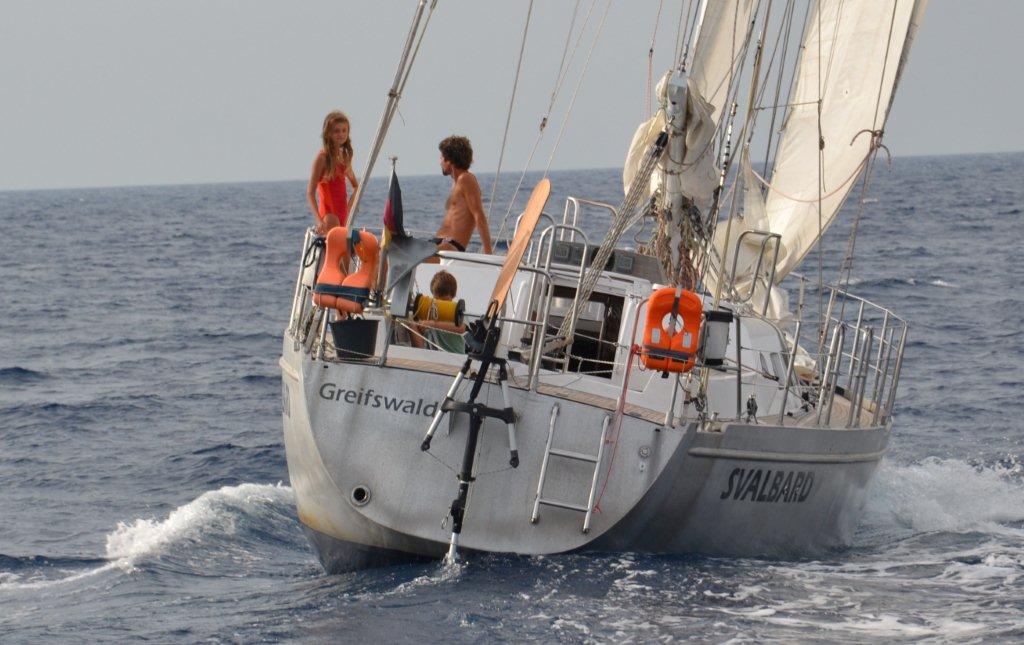 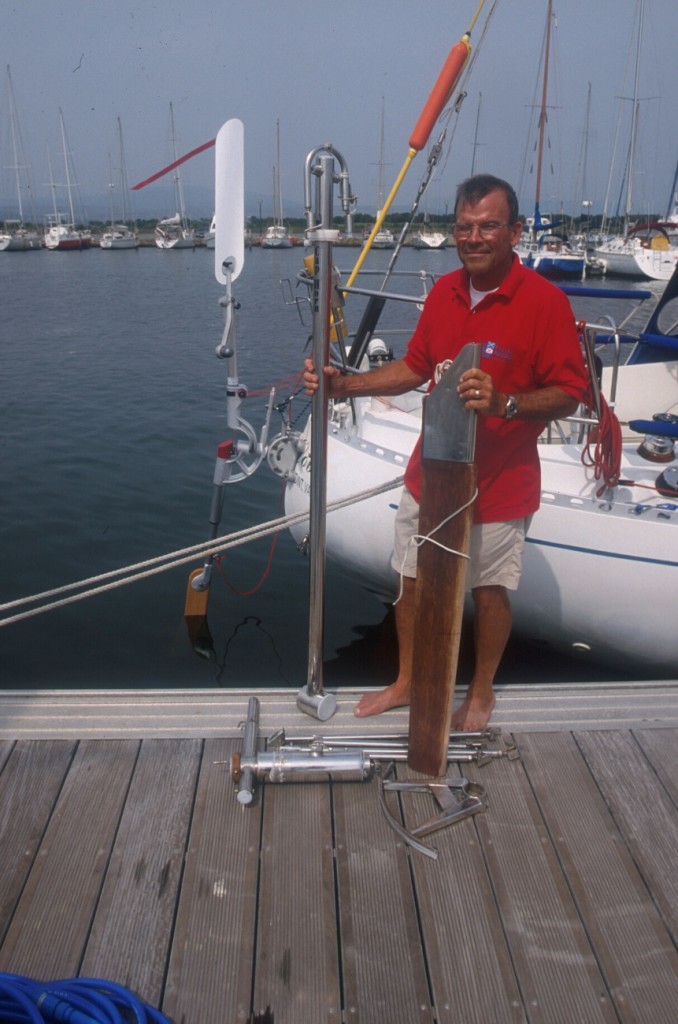 Belt and braces – take two and you should be ready for anything.

SPONSORSHIP
If I embraced every one of the requests for sponsorship (in the form of a free Windpilot) that comes through our door, I could easily ship a year’s worth of production without selling a single unit. But what good what that do? Would that help my business? Would you not expect a sailor who received his or her system as a free gift to make a special effort to say nice things about it? Should I be in effect paying sailors to spread the word that my systems really work? And would their views count for anything if I did? I believe word of mouth is the better way – and it’s fairer too: my customers get peace of mind to enjoy their bunk on passage and I can make a living from my labours!

Sponsorship has never really broken into the mainstream in German sailing, not least because the whole idea is so often misunderstood. Typically the pitch runs something like this: “You give me a lollipop and I’ll find ten different ways to say how good it is.” Poorly-drafted agreements and run-away egos not infrequently derail the deals that do emerge too, to the dissatisfaction and disadvantage of both sides. The German sailing scene is littered with such misunderstandings: sponsorship at a professional level demands well-resourced companies ready and able to invest in and capitalise on campaigns, but the German market is just too small. And while trading merchandise for media exposure has become a slick and omnipresent model in other areas of life, making it work in sailing poses big problems due to the lack of people willing to pay. Wolfgang Quix made a determined effort over many years to find well-resourced sponsors for his yacht JEANTEX. Despite being one of the forefathers of German bluewater sailing he never succeeded in this particular venture and eventually sold his boat. 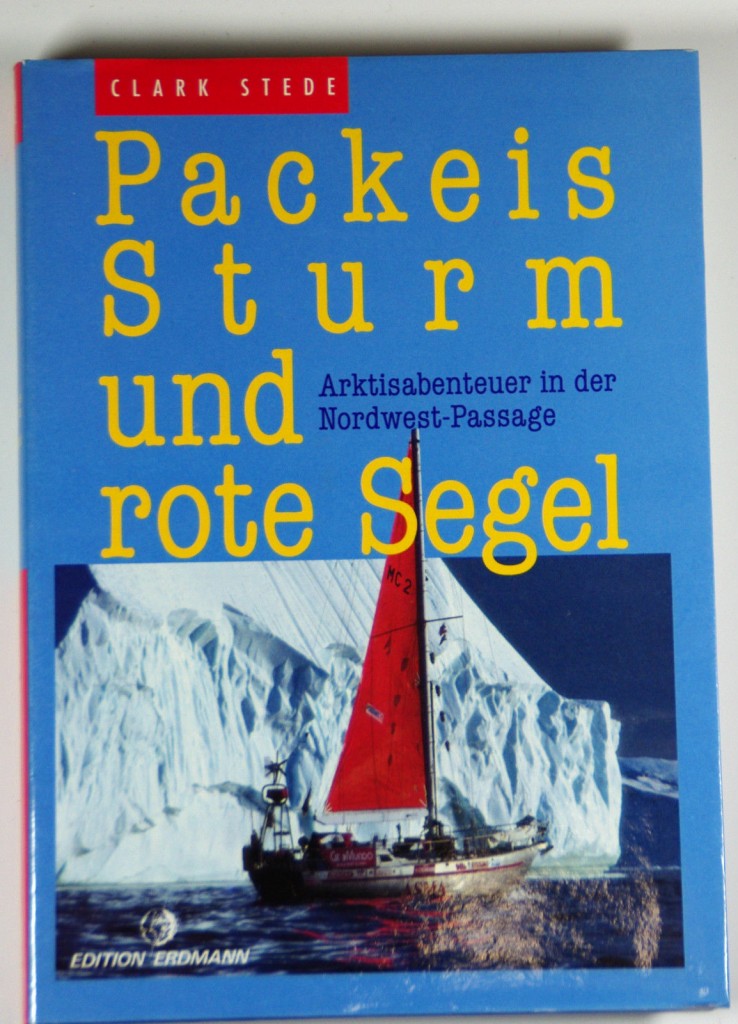 CLARK STEDE
Decades ago I embellished the stern of Clark Stede’s yacht Asma at what we might call a friend’s discount. When I saw the first photos of Asma in action, prominently featured on the title page of Germany’s YACHT magazine, I noticed the striking seascape and towering ice cliffs, of course, but mostly my eye was drawn to the ludicrous position of my Windpilot’s rudder blade, the result of the owner having welded a bar around the unit to fix a non-existent safety problem, in the process rendering the lift-up feature useless and forcing him to fit and adjust the blade by hand, which he was never able to do properly. When I met Clark later on at a boat show, he informed me that my system didn’t work very well (really?) and that he intended to replace it with an American model (with which he then experimented and eventually achieved satisfactory results – or so the story goes). So much for the win-win of sponsorship! The boat, now the TAONUI, went on to become globally renowned under subsequent owner Tony Gooch. My Windpilot may well still be hanging trophy-like on Hans Bernwall’s wall somewhere over there in Oakland, California.

BERND LUECHTENBORG
I doubt anyone has done more to scare sponsors away from German sailing than Bernd Luechtenborg, who left his commercial backers and especially his media partner YACHT magazine in absolutely no doubt as to where they stood in his order of priorities. I am amazed that the media partner has still to share the story with its readers, although perhaps its natural interest in the decidedly juicy details of the tale is out-gunned by the sense of embarrassment at its own involvement. Here’s a comment I posted on the YACHT magazine forum in 2010 (still hiding behind a pseudonym).

LAURA DEKKER
I confess, I broke my own rules and sinned against myself: when Laura and her father Dick Dekker came to visit me at my workshop in 2009 (when she was just 14) with the intention of buying a Windpilot system, the plan explained to me by this thoroughly unpretentious young adventurer almost moved me to tears. I handed over a Windpilot system as “sponsorship” with a glad heart for the very first time and even travelled to Holland to upgrade it when she changed boats, so momentous did the whole undertaking seem for someone so young. The story captured the headlines around the world. Less well known is the fact that I never heard a word of thanks for my contribution. JOHANNES ERDMANN
An amicable and enthusiastic young man appears, eager to learn and bursting with plans that remind us in many ways of our own dreams of youth; naturally we want to help him, especially as his ambitions clearly run far deeper than his pockets. Sometimes we all need a little boost to get our projects off the ground, so why not lend this young sailor a hand, offer him reduced rent and help him find his way to a favourably-priced windvane steering system? Misunderstandings in human relationships spring so often from a shift in priorities: our judgement as to what constitutes a fair balance just seems to change when other considerations (possibly including a financial element) slowly but surely take over the controls. For a journalist, however, professional success is founded in large part on credibility, so it will certainly be interesting to read why a once passionate advocate of the Windpilot brand suddenly sold his system in favour of another!

The rules of human interaction are subject to constant personalisation (or, to put it another way, some people are always looking to get more for less). All too frequently ego trumps everything else to leave empathy floundering in its wake. Thankfully I inhabit a world shared by a large number of people who put company and comradeship before the daily rite of feeding the ego and chasing the next dollar, a world in which respect – respect for other people and respect for the natural stage on which our adventures under sail unfold – genuinely matters.

It may have given me the odd grey hair (just one or two – I’m sure nobody has noticed), but it is a world that allows me continued pleasure in my work even after all these decades.

And for that I remain a grateful
Peter Foerthmann