A RENDEVOUS OFF THE AZORES 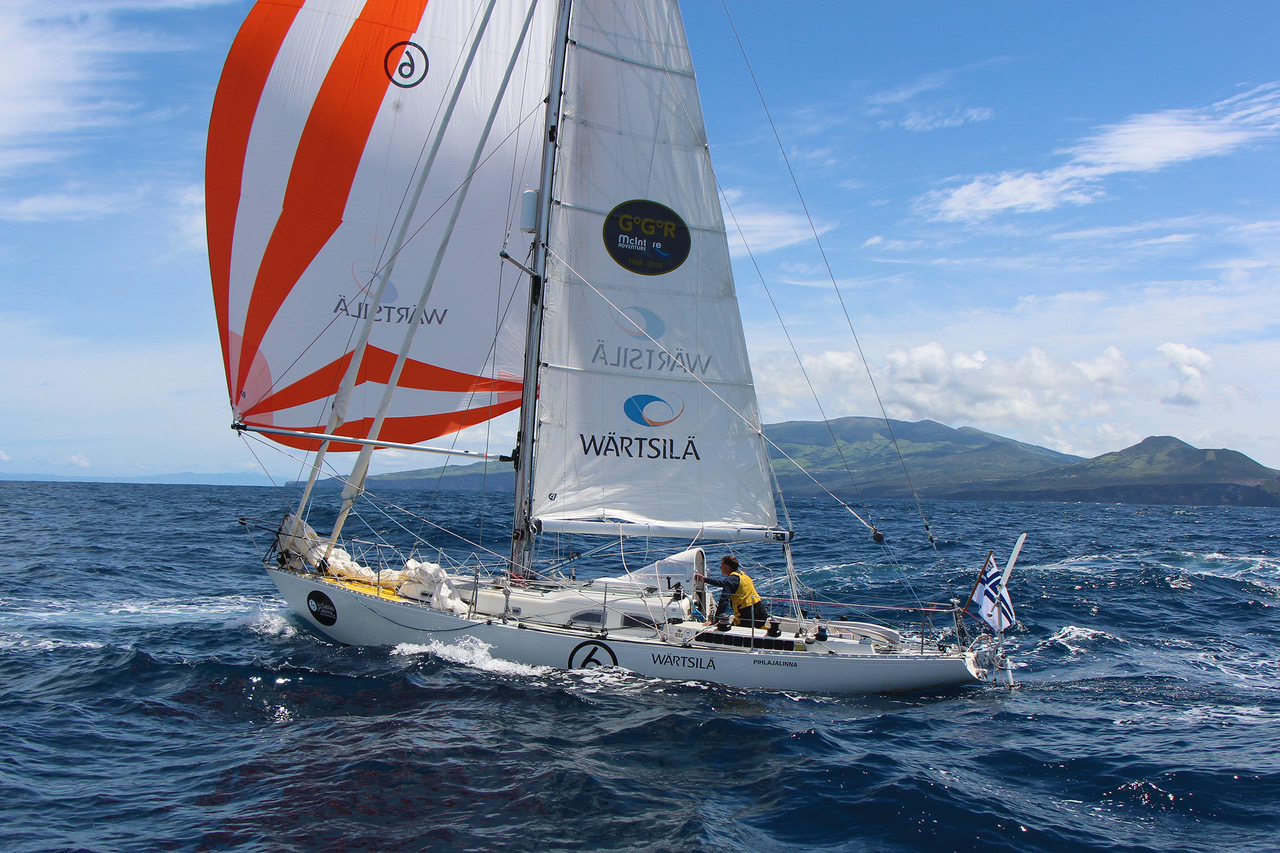 What could be more welcome after 310 days at sea (with plenty more still to come) than a bit of variety? GGR followers have been watching Tapio slowly but relentlessly tick off the miles for months and months. He may have set off with the fastest boat in the fleet, but things inevitably change on a voyage as long as this and, having accumulated his very own complex ecosystem below the waterline, he has been kind enough to slow the pace and let every last one of his co-habiting fruits de mer stay on (or under) the bus. Known for his love of animals and the natural world, Tapio would hate to think of excess boat speed making the mussels nauseous… Or is it just that he wants to show his marine menagerie the world in slow motion? In truth, I have no idea: whatever the case may be, people are going to struggle to believe their eyes when Asteria (having eventually returned to France) is lifted from the water to reveal her flora and fauna. 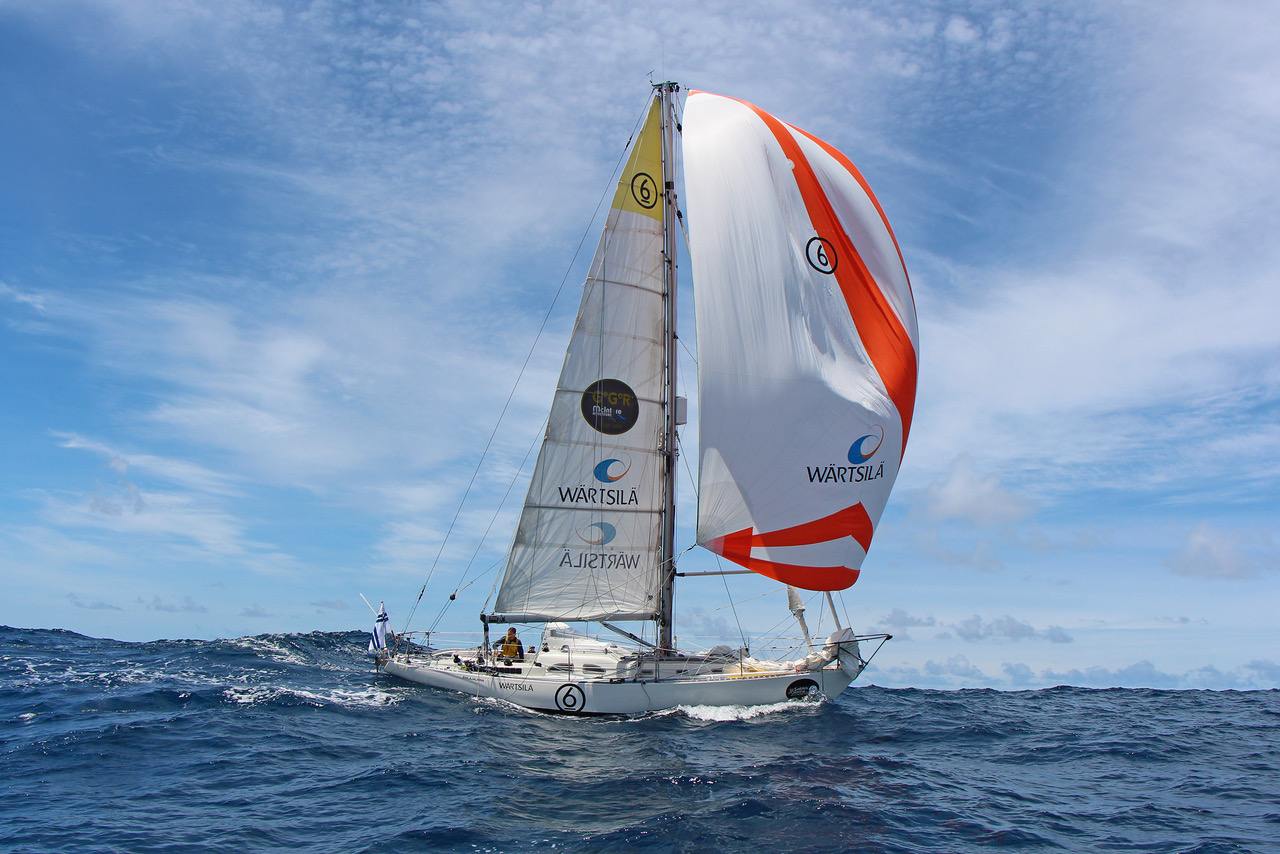 I, in my capacity as the father of Tapio’s transom ornament, have suffered alongside him in silence. His stoic serenity and equilibrium amaze me and I have enormous respect for what he is doing and how he is doing it.

Like many people who have left the first flush of youth far behind, I find I tend to wake up rather early these days. The day before yesterday was no exception in that respect and neither was the fact that I started the day with a check of the GGR tracker. What I saw on the screen that morning (it was morning in my world anyway) though gave me such a surprise I nearly fell off the sofa. Had the tracker lost it altogether? Was it altitude sickness? Tapio was into triple figures! What was going on? Had Asteria been picked up by whales? Had Tapio suddenly discovered a hidden accelerator? Had homesickness overwhelmed him to the point of indulging the last resort?

Questions, questions! The truth, when it came, was both more mundane and considerably more exciting: Tapio had been able to put the spinnaker to work and it was this that had been hauling the boat along with such breath-taking urgency! The record run – 120 nautical miles no less – will probably be endorsed by Guinness so there can be no dispute… There on the sofa, sweat dripping from my brow and my mind writhing with feverish thoughts, it suddenly occurred to me that Tapio deserved to be congratulated not just promptly but in person for this remarkable feat! 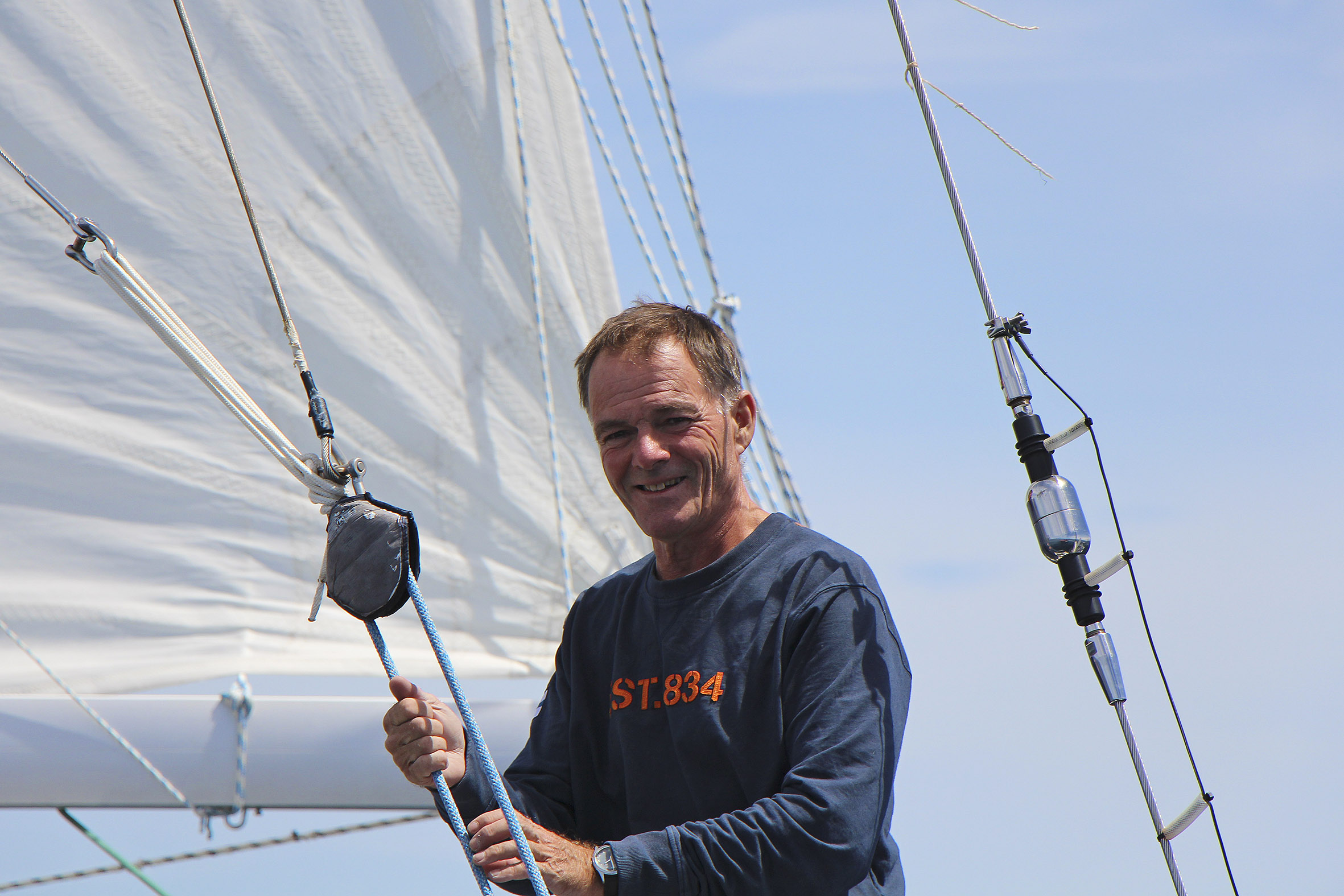 The Azores off the starboard bow, Tapio storming along under billowing canvas: my synapses crackled, and I thought why not? Why not put a couple of contacts in touch and see what could be done? 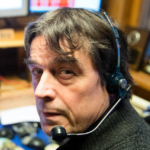 Early on Monday morning I spoke to Tapio’s ham radio operator Jari Jussila and his shore team rep Hannu Hollmen to see whether they might be able to fire up the aerials out there in the Finnish forests. The first question was how Tapio would cope with the sudden appearance of real live humans out in the middle of the Atlantic. Would the shock be too much? Would he object to having his race interrupted, however briefly, and was there a chance he might not appreciate being distracted from his intensive daily reading schedule? The consensus decision was that it was a risk worth taking.

Tapio’s first response when he learned of the plan seems to have been to dig out a razor. He could well be home in a few weeks and I have heard it whispered that his house key has gone astray somewhere down in the bilge just like the plug for hisSailingGen Hydrogeneratordid, so he probably realises he needs to step up his personal grooming to make sure his wife still recognises him when he arrives. 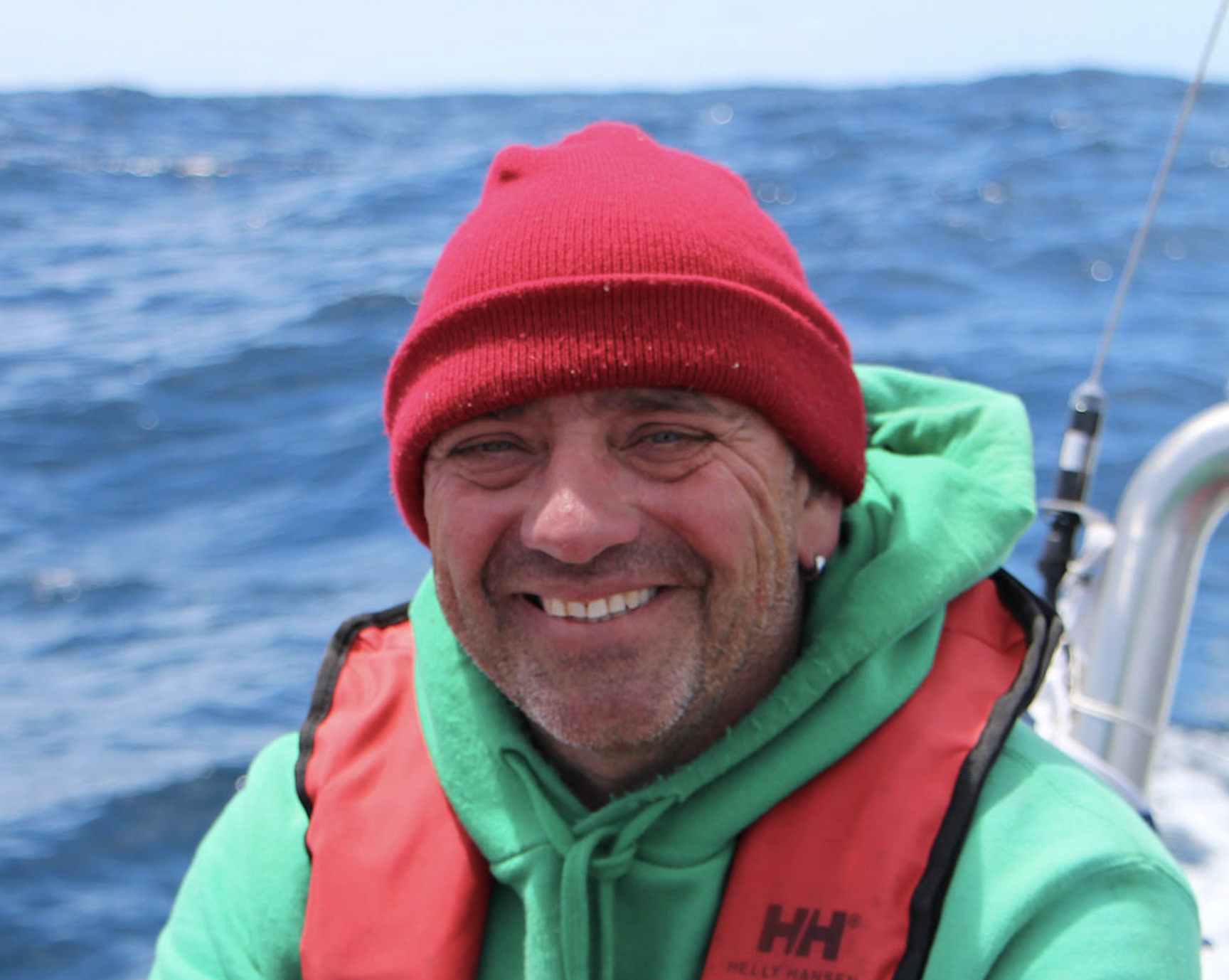 The next step was to set the wheels in motion with my Windpilot mafia in Horta. My call to Windpilot representative Harry Schank found him still fast asleep. We soon fixed that and a few minutes later I hadLes Gallagherlocal hotshot photographer of fast-moving fish and even faster powerboats, on the line. 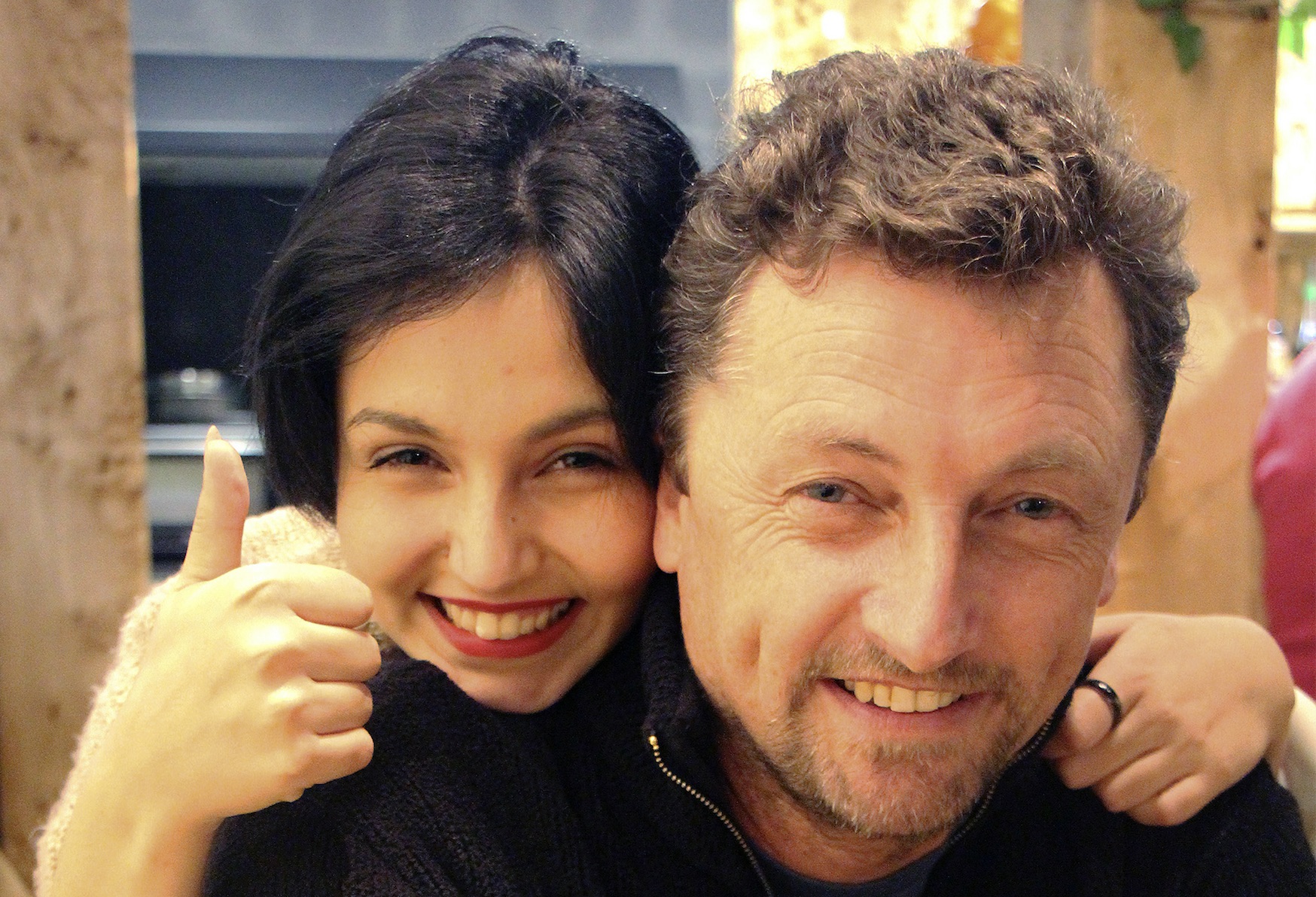 Tuesday morning, bright and early, the chase boat hit the water, fuel and oil were checked and Harry and Les headed out onto the fearsome Atlantic. I was pleased to learn that everyone was dressed for the occasion too, Harry going for the high-vis look and the immaculately clean-shaven Tapio – inspired perhaps by the bright sunshine that decided to favour our photo-shoot, removing his foul-weather gear to reveal what looked for all the world like freshly-ironed shorts. 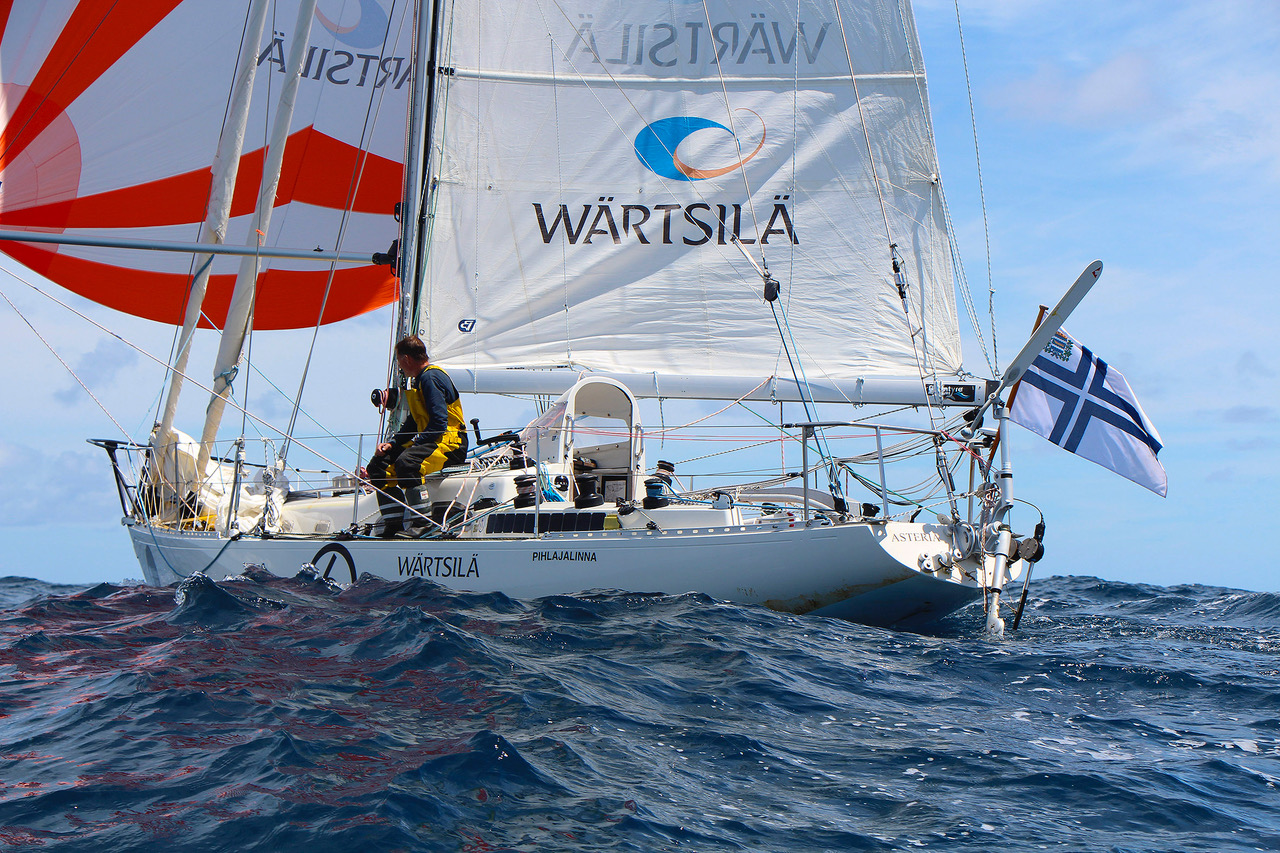 The team intercepted Asteria about 4 miles West of Faial, cautioned Tapio about his excessive speed, circled their quarry several times to allow close inspection and shared a few words of wisdom with Tapio about how to wield that sextant. 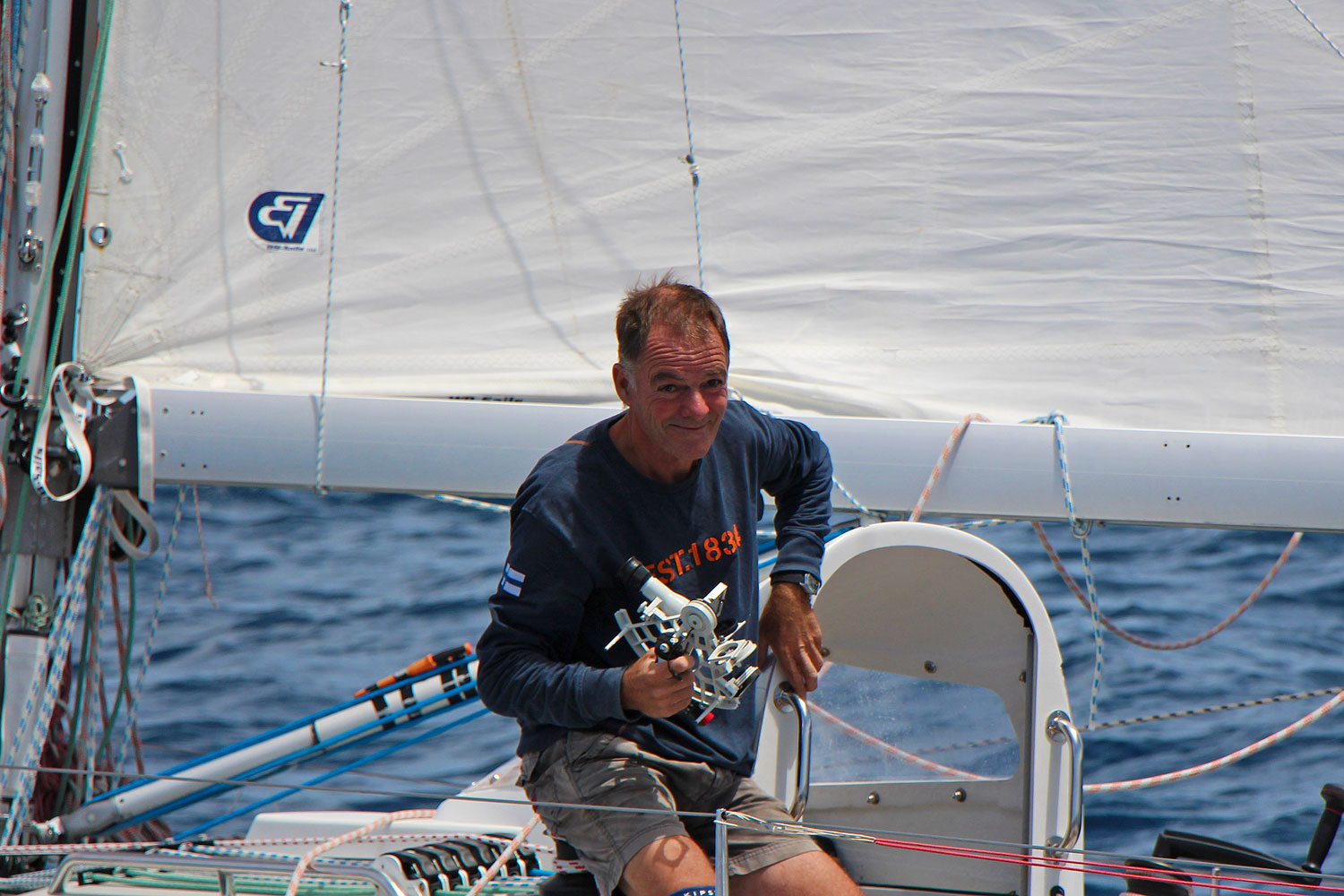 Tapio looked to be in great shape. I can hardly believe how young and healthy this cruise has made him: gone is the frown that seemed never to lift from his face during the pre-race preparations and gone too, apparently, are the worries that put it there and made us almost feel sorry for the man at the time. Tapio, it is clear, has found whatever it was he went to sea to find. Watch out Finland, you could be in for a shock… 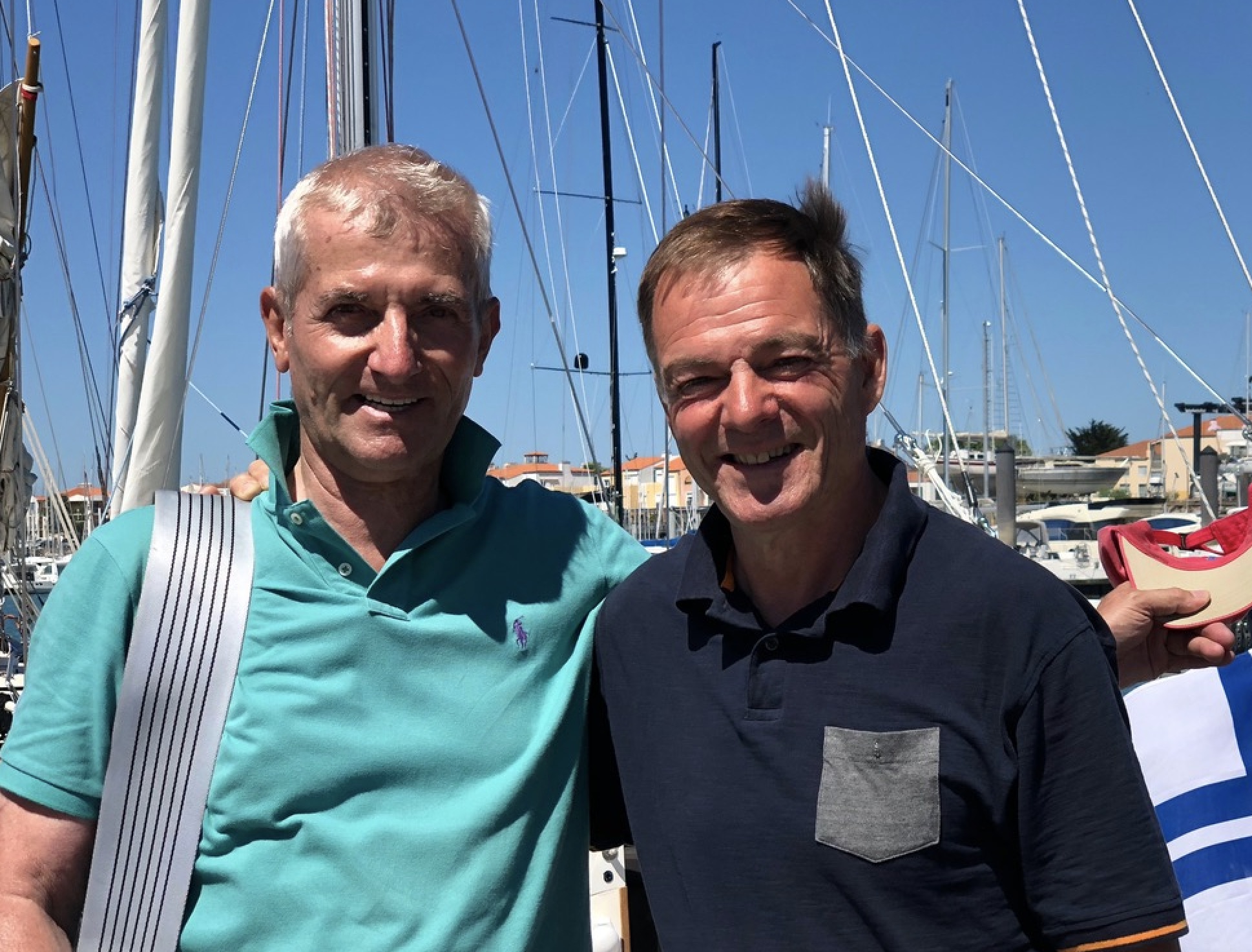 The two boats came together on a relaxed Atlantic, shared a few words, added a few more entries to the photographic record and then, with a friendly wave, made haste for their different horizons as fast as they could ready for whatever awaits. Tapio was left to his fate, his anticipation and his dreams of fresh food and cheeky little number to wash it down.

Left to himself, Harry would surely have taken a whole hamper of culinary delights out to tempt Tapio, but we know the race manager’s punitive eye never rests and even a single banana changing hands would likely have had consequences at GGR HQ, so the utmost care was taken to ensure that only words were exchanged. Speaking with my sponsor’s hat on, I give my solemn word that everyone played strictly by the rules. All of us who have followed this race understand the threat of penalties looming above the competitors like the Sword of Damocles and none of us, I am sure, would want to tempt the organiser’s hand: time penalties we have seen in abundance and given the months Asteria has already spent at sea, there has to be a risk we might watch her arrive only to learn that officially she never finished at all… 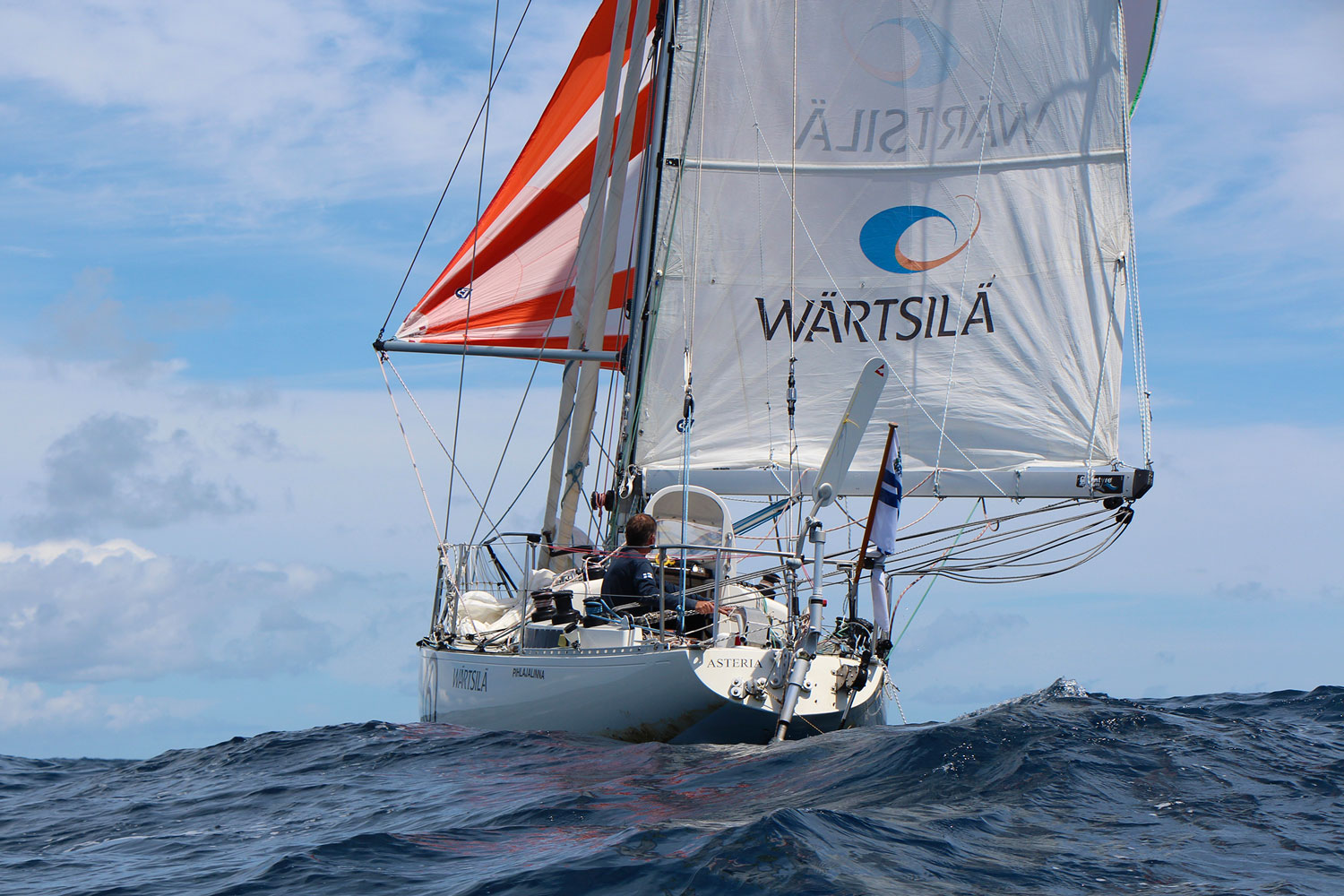 Our little mission to Tapio – from my giddy moment on the sofa to the photos landing in my inbox – lasted 36 hours all told. 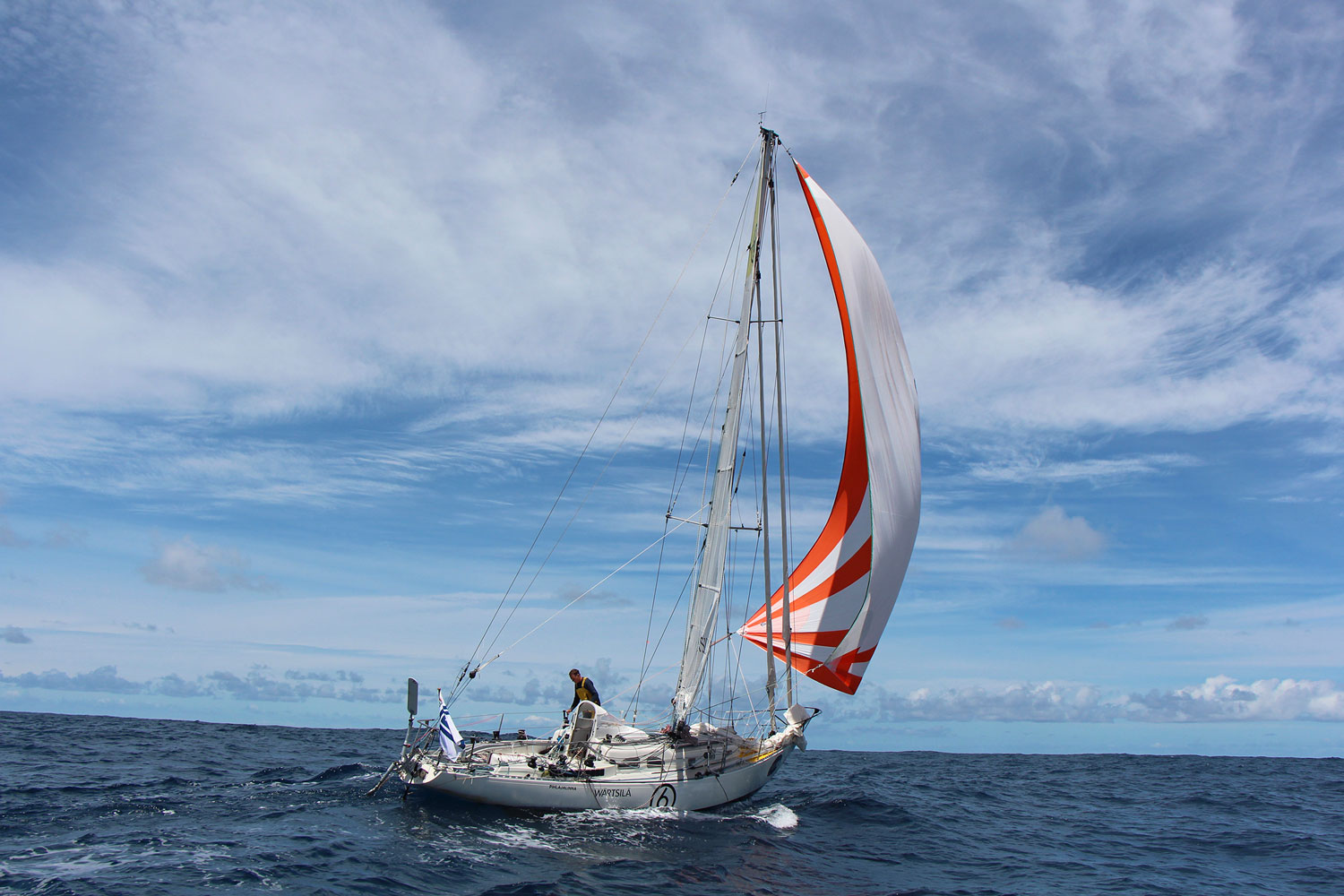