SLEEPLESS ON THE ATLANTIC 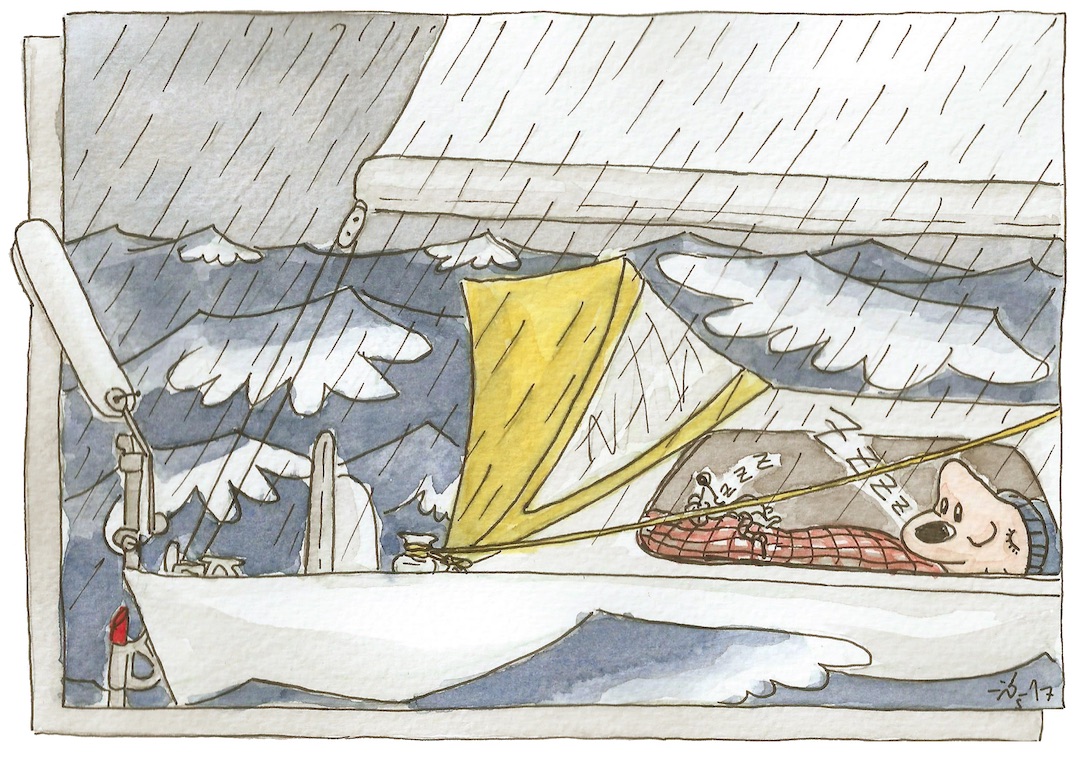 Biscay upwind is no picnic. It can punish sailors without mercy, testing them and their equipment to the limit – and all this just a matter of hours after leaving dry land. Final farewells, a hero’s ovation on the way out and them wham: darkness, more than a hint of autumn on the wind and water absolutely everywhere, inside and out. What will the weather have in store this time? That is the question tantalising followers of the GGR throughout this portion of the race.
When I published my experiences from the GGR 2018 in the Windvane Report in September 2019, I also announced that I intended to have no involvement with the event in future. Three years later, I have to confess that I have not quite kept the promise I made myself: I have sold and supplied something for the transom to two of the GGR 2022 sailors and have been happy to be of service to them. The short version of how this came to pass goes as follows. 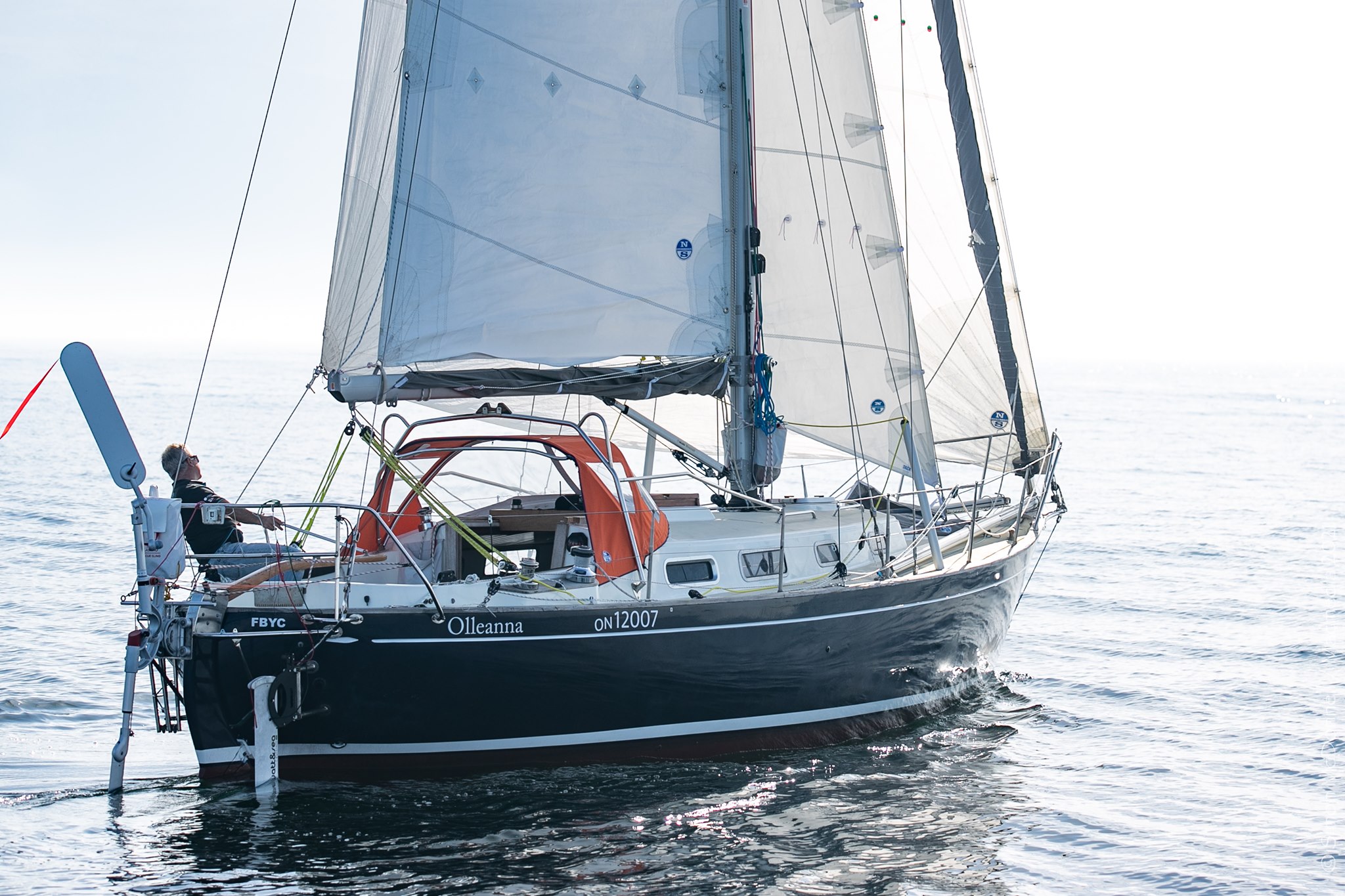 South African Jeremy Bagshaw is the new owner of Olleanna, the OE 32 with which Are Wiig started the GGR 2018 (his race, you may recall, ended in Cape Town, the disappointment only slightly tempered by the impressive seamanship he demonstrated to reach safe harbour under jury rig). Jeremy, a Windpilot sailor for many years with Jerrican, a Dudley Dix 43, took over the boat in Cape Town, swapped the Monitor out for a Pacific and set off in May 2022 bound for LSO.

Hi Peter,
I hope you are well and welcoming the northern spring and summer?

I am currently en route to Europe for the start of the Golden Globe Race and at the moment I’m 500 miles out of Ascension Island. You can track and contact me on https://my.yb.tl/OlleannaGGR if you like?

I’m having a wonderful sail and for 14/15 days at sea I haven’t touched my tiller as Ellen is doing all the hard work 24/7! What a wonderful piece of equipment!

What this does make me realize is how utterly dependent I am on my Windpilot and to a large extent on my Watt & Sea hydro generator as well. I had 100% cloud cover for 8 solid days, as I no doubt will in the southern ocean?
Best regards,
Jeremy (and Ellen – my steering slave! ) 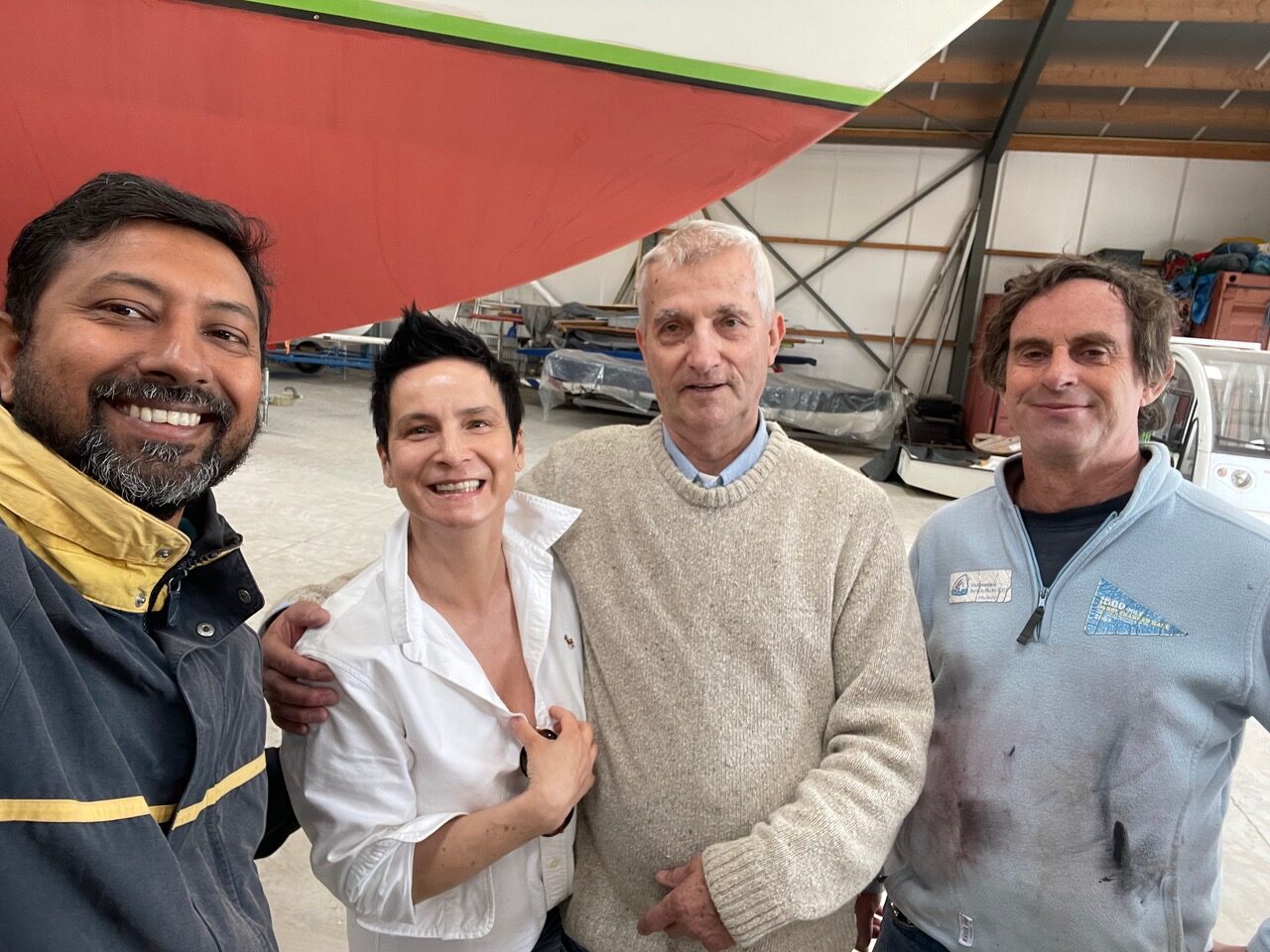 Having survived what must have been some very dark hours indeed in the GGR 2018 after multiple rollovers left him with a broken back and his boat shorn of both masts, Abhilash Tomy decided to have another go in 2022. A few months ago Abhilash and his sponsor Bayanat acquired the Rustler 36 sailed by Philip Péché in the GGR 2018 and moved it to Den Oever in the Netherlands to prepare it for the 2022 race.
Knowing that Abhilash would not take no for an answer, we allowed him to buy a Windpilot Pacific in May. We think he was joking when he said,

If you do not sell a Pacific to me, I will have to steal a unit from another boat,

but it seemed wisest to keep him happy just in case, so off to Holland we went. It was a real pleasure to see his ever-beaming face again in person. We will always treasure the memory of the time we spent together with Abhilash and his charming wife Urminala, who even speaks Polish, my wife’s mother tongue. 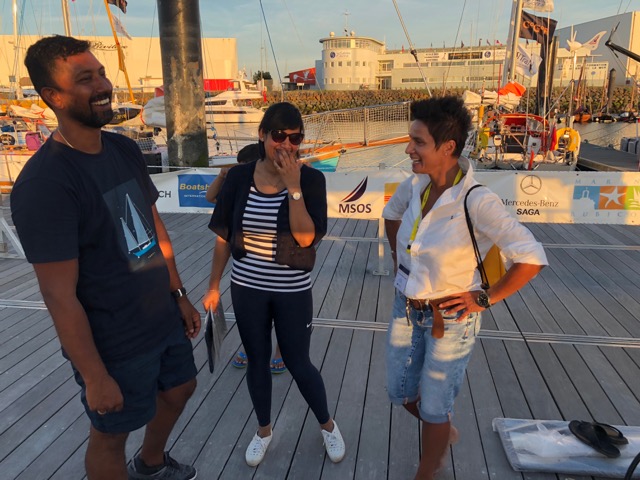 These interactions between loyal customer and windvane supplier, which would be perfectly normal (or better than normal) in any other context, had the effect in this case of meaning that despite my avowed intentions, I was back in the GGR again and could not help but take a close interest in developments. And there were certainly some developments to consider: I investigated mounting arrangements for windvane self-steering systems and the strength of the transoms to which they are attached in a 2021 article inspired by the experiences of the GGR 2018 and two subsequent incidents involving GGR boats and it soon seemed that some of the fears I expressed there might be coming true.

The GGR 2022 started on 6 September and the first bad news from the racecourse landed just a few days later, when it emerged that Damien Guillot was having to suspend racing and return to LSO to repair damage to his vanegear. The breakage – a worrying example of what can happen when what should be a perfectly robust component has to operate in conditions to which it should not have been exposed – was the sort of unhappy chain of events that will trouble all windvane self-steering manufacturers, myself included.

05.07.2021 I have published my considerations about races like GGR, containing recent failures on LAZY OTTER in 2021 and SAGARMATHA in the same year.

Will this turn out to be an isolated incident or do we have more of the same to come? I expect the fear of losing self-steering will never be far from the skippers’ mind over the coming months – but that is not what I sat down to write about today. I am interested in how mechanical steering slaves are used and what they can realistically be expected to achieve, not least given the limits to which they are subject as a result of the physical laws that govern their operation. 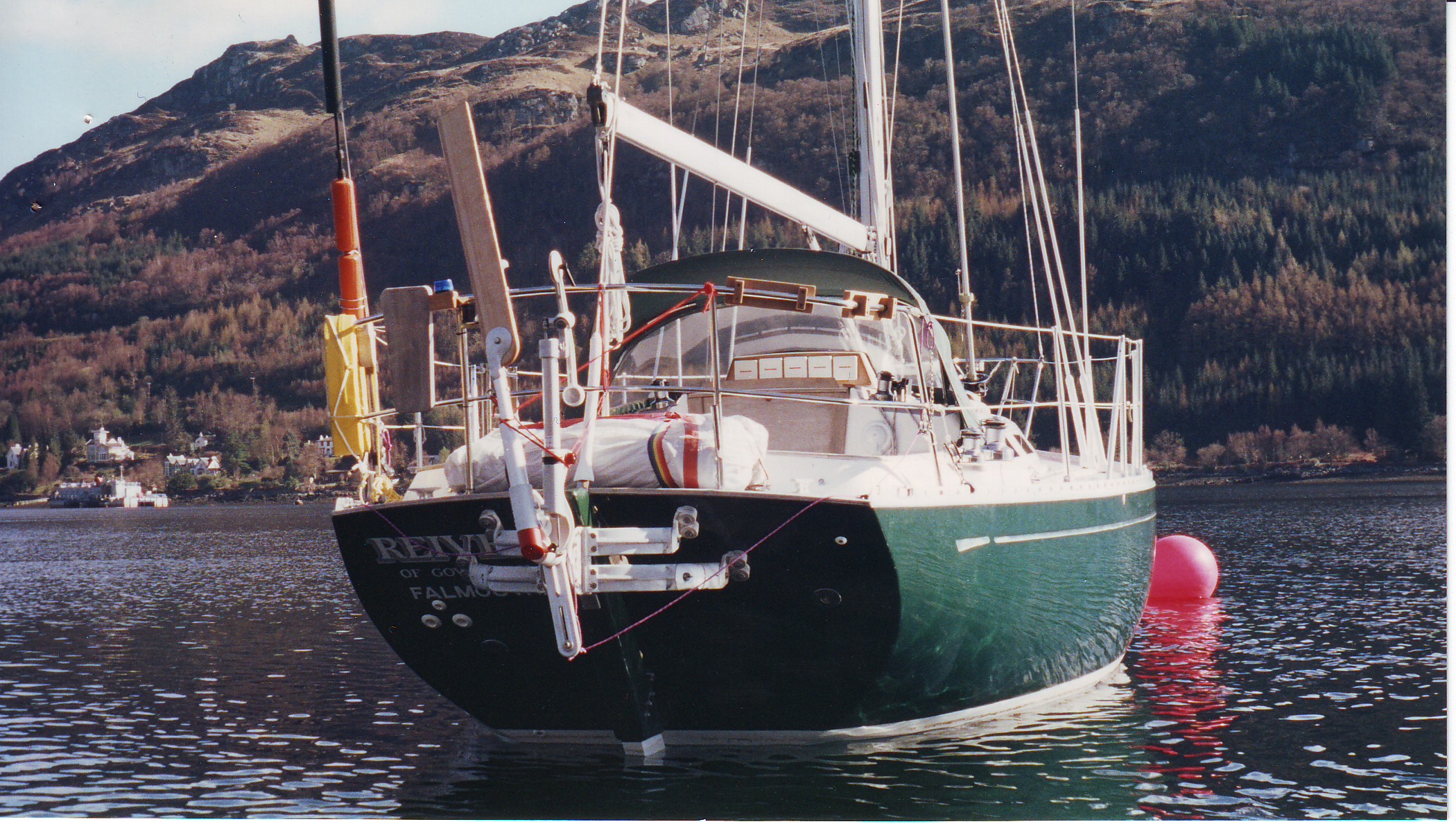 I have equipped a great many Rustler 36s over the decades and am in contact with the yard in Falmouth. As part of my ongoing research, I recently discussed the matter of auxiliary rudder system mounting with Rustler Yachts. When such systems are installed at the yard, I learned, they take the precaution of strengthening the highly stressed areas of the transom on the inside to avoid any excessive loading and prevent vibration. Photos from the builder confirm the high standard of the work done. 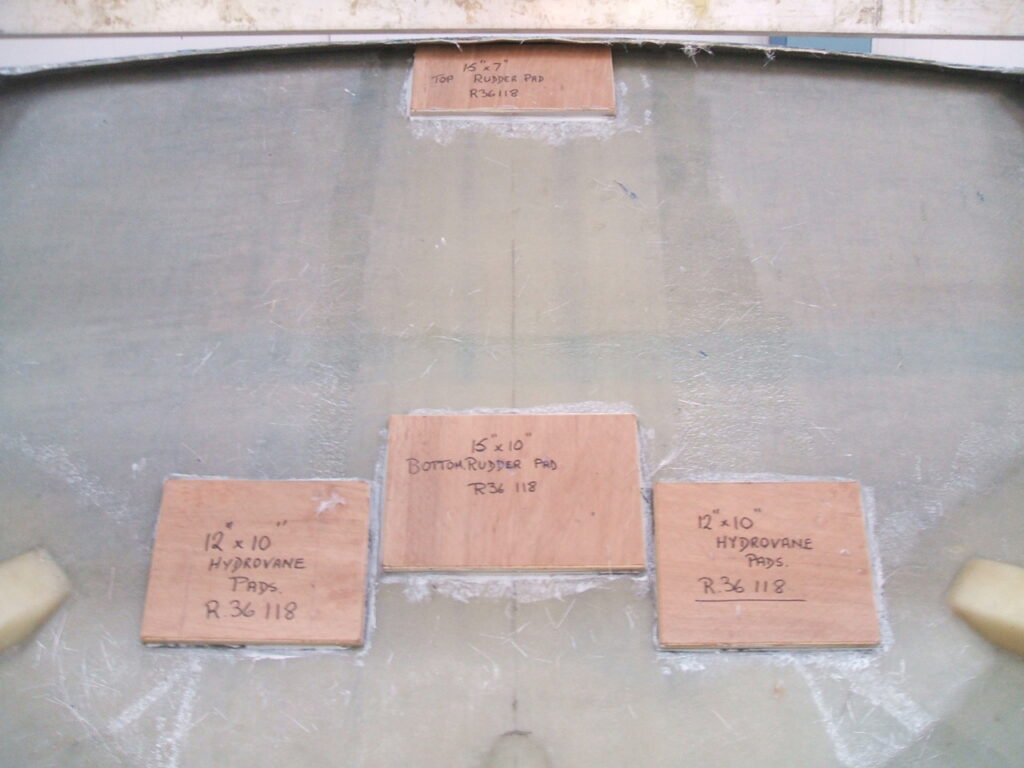 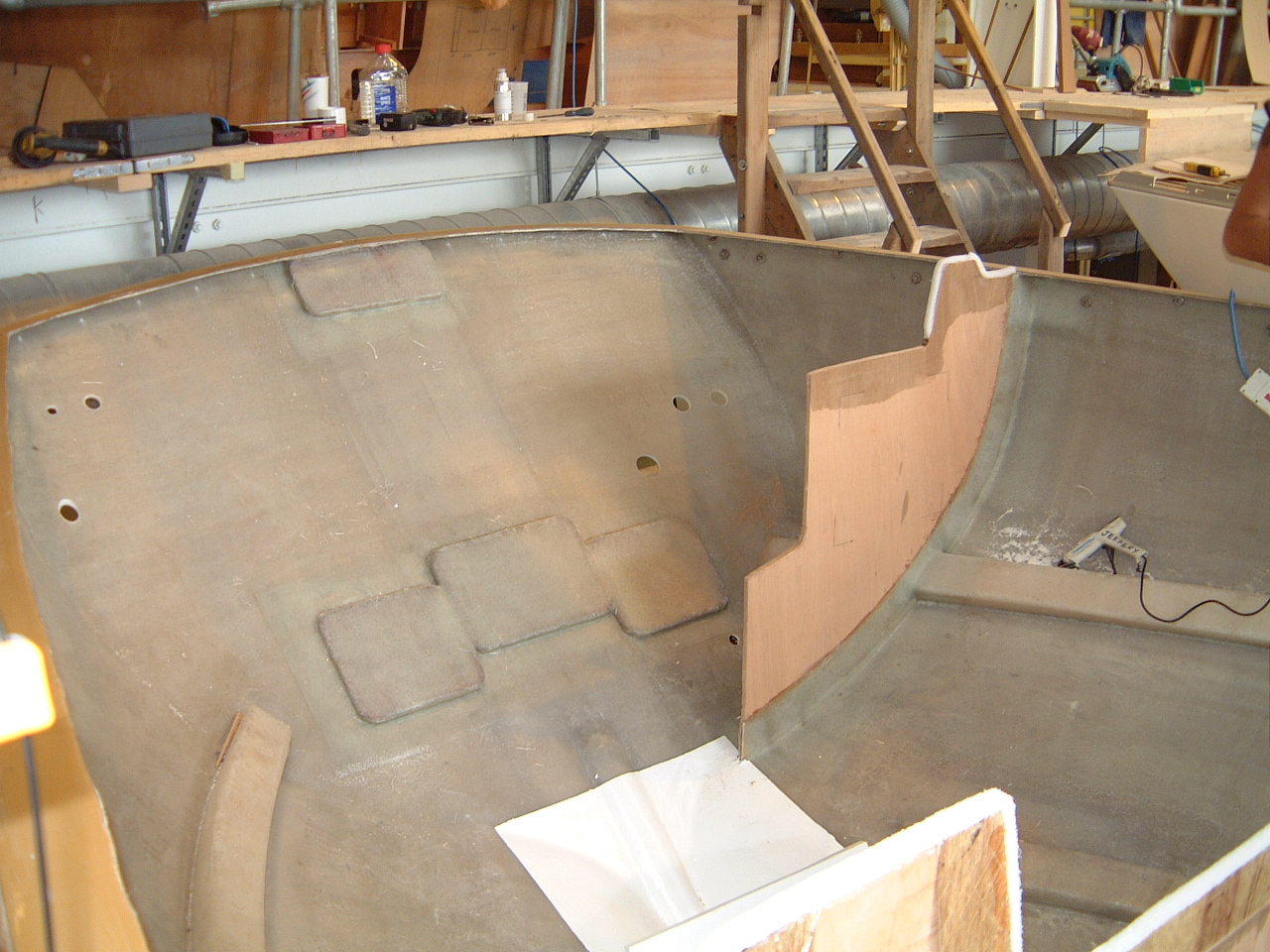 But what happens when an auxiliary rudder system is fitted later on in the boat’s life? Are equivalent precautions taken and if so, how? Is sufficient internal reinforcement provided in the transom area? The flat transom surface of the Rustler 36 (which has a laminate thickness of 8 mm according to the yard) poses a particular challenge for owners wanting a robust installation because of the importance of preventing vibration, which can lead to material fatigue and failure in long-term use. This may well be why we saw system mounting components

– 2021 break on Ertan’s Lazy Otter
– 2019 barely hold together until the finish on Jean-Luc’s MATMUT (and even that was only thanks to his extensive and ingenious mid-race reinforcements) and
– 2022 fail at the bottom in the recent incident on PRB
– UPDATE 20.october.2022: the duplex ruddershaft on PRB broke away just at the top end of the rudder 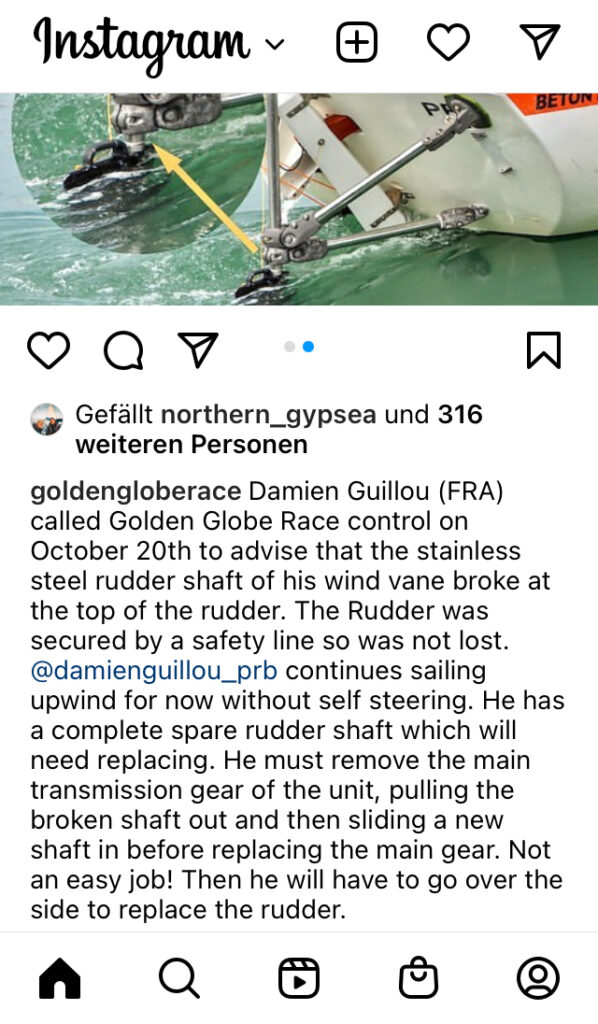 I suspect vibration lies at the root of all these failures affecting Rustler yachts because of the way constant changes in loading can overstress materials and cause them to break. It would have been very interesting to see a material analysis of the failed M10 bolt on PRB (vibration problems can only really be resolved by eliminating the vibration; nominal material strength ultimately makes little difference).

UPDATE 13. november 2022: the duplex ruddershaft on PRB broke away just at the top end of the rudder again, the skipper intends to stop his participation. Vibrations might have been caused by overcritical balancing of the new High Performance rudder.

Reminding sailors (and ensuring they stay reminded) of how sail trim affects the level of performance they can expect from their self-steering and how every system has its limits is part of my standard repertoire. Underestimate the significance of these fundamental principles and an undesirable outcome is assured: high power consumption in the case of an electric autopilot, excessive yawing in the case of a windvane self-steering system. If the helm rests in human hands, the result is sore arms, ever heavier eyelids and, in the absence of any respite, an inadvertent nap. The danger is absolutely real. The GGR’s Guy Deboer battled sleep for 30 hours before eventually succumbing, only to wake up as his yacht Spirit hit the rocky shore of Fuerteventura. He even lit a cigar to try to keep himself awake – but to no avail. 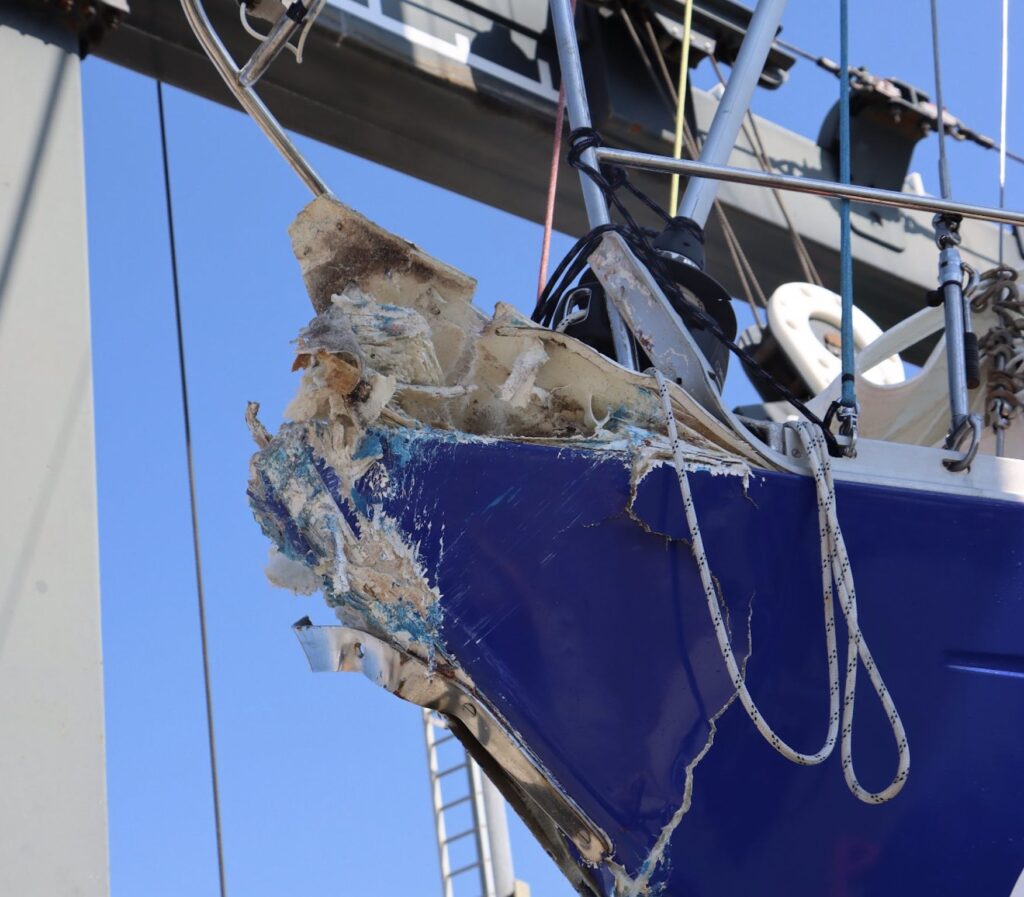 The irresistible onset of sleep also led Bayanat to bump into a cargo ship during the feeder race from Gijon to LSO, a collision that left the Rustler needing a very rapid and comprehensive nose-job before the start of the main event.

Auxiliary rudder systems and servo-pendulum systems operate according to different principles and this affects their suitability for different boats. Servo-pendulum systems utilise the servo effect to generate significant power, which explains why they can be seen even on relatively large and heavy craft. Auxiliary rudder systems lack this power boost, so their capabilities are inevitably more limited. Both system types are suitable in principle for the GGR because the boats used for the event are all of an unremarkable size and weight. This means that the system-related limits are largely irrelevant other than in the most severe conditions, when some skippers will find themselves compelled to lay hands on the tiller or wheel somewhat earlier than others. We should not forget, of course, that every rudder movement slows forward progress, so keeping ship and sails properly balanced for the prevailing wind conditions makes sense for anyone crossing the water by boat. This applies even to racing sailors, whose ambition can sometimes encourage them to neglect balance in the misguided belief that more power always equals more speed.

What does this have to do with sleep loss? Well, the point at which each system type ceases to perform effectively is the point at which the skipper has to put other things – including sleep – to one side and concentrate on steering, especially if he or she is of a competitive bent and would prefer to stay ahead of the pack (remember the “R” in GGR). What is a skipper to do? Keep maximum canvas flying, discover exactly where the limits of the chosen steering slave lie and be prepared to steer by hand for extended periods when necessary or adapt sail area to the prevailing conditions, keep the steering slave in its comfort zone and have more time to look after everything else that demands attention on board? It would be fascinating to find out exactly how many hours each competitor ends up having to dedicate to manual steering.

The extent to which the inherent differences in capability between the different system types will become apparent depends on the ambition and prudence of their boss. Sleep deprivation already seems to have been an issue for almost all the competitors in the GGR 2022, which – for me at least – is a very troubling thought when the possible consequences include stranding and collisions. 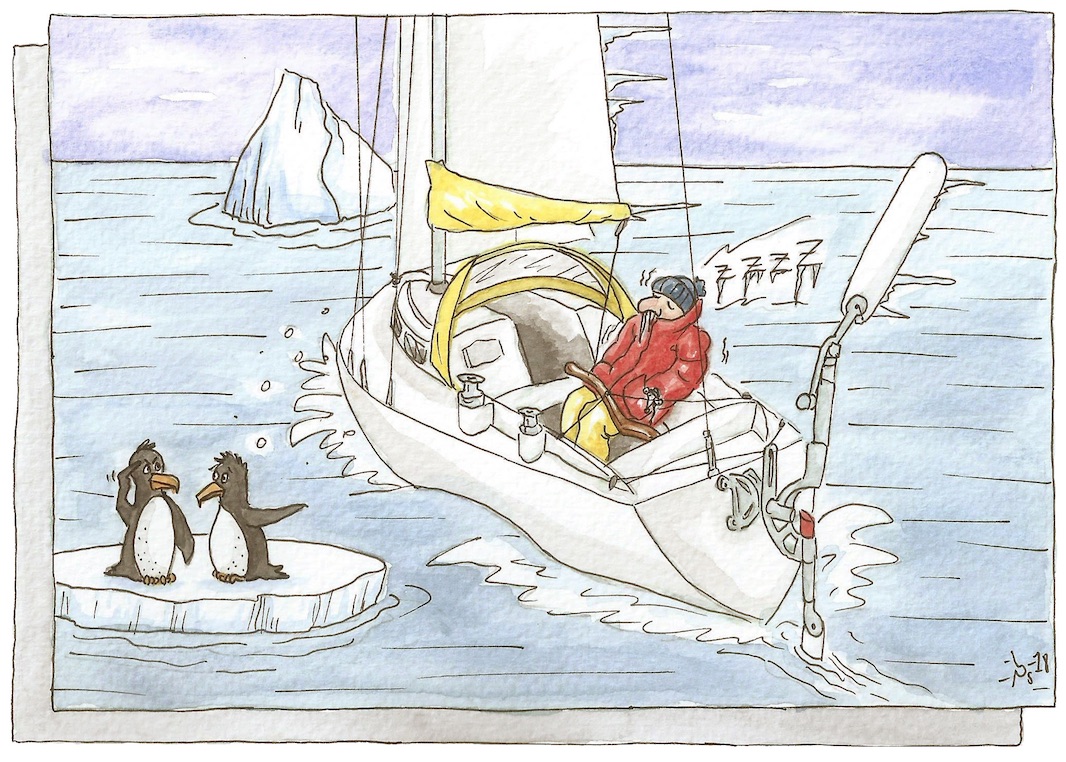 The risks associated with single-handed sailing can easily be mitigated today thanks to technical aids like AIS, radar and OSCAR, which help to improve safety and avoid collisions irrespective of a skipper’s sleeping patterns. Outlaw their use in order to spice up the race, however, and sailors have to be prepared to sail “blind” (and accept personal responsibility for any consequences, as the organiser consistently reiterates) if they wish to compete.