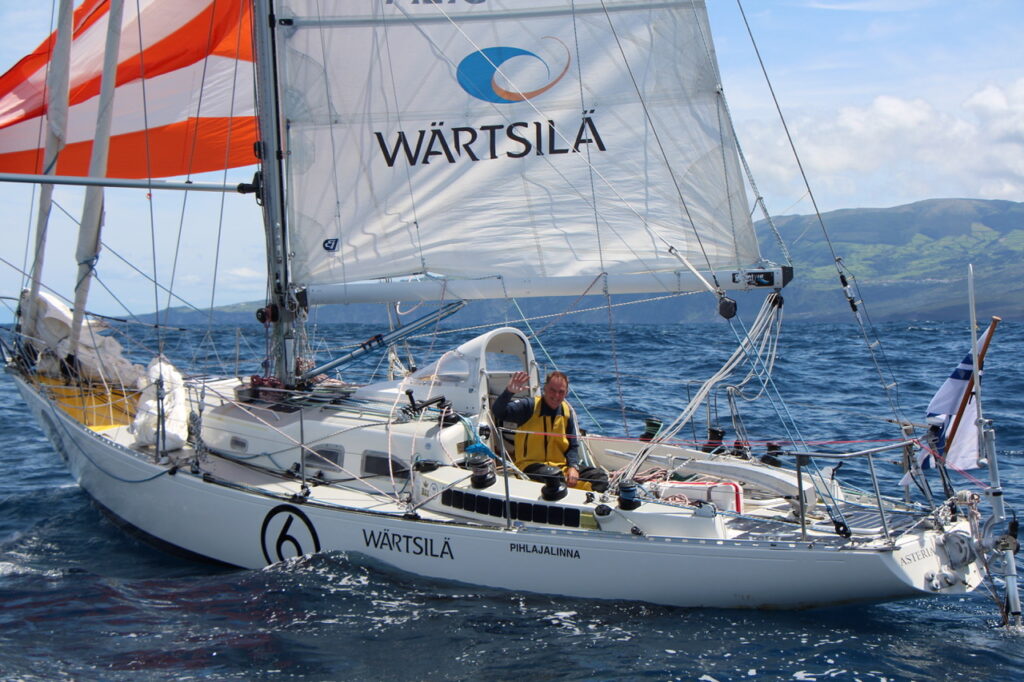 It has been two days since Asteria slipped beneath the waves. Thanks to a professionally coordinated rescue, Tapio is now on a cruise to China and with him safe and well, thoughts are inevitably turning to what could have caused Asteria to sink. 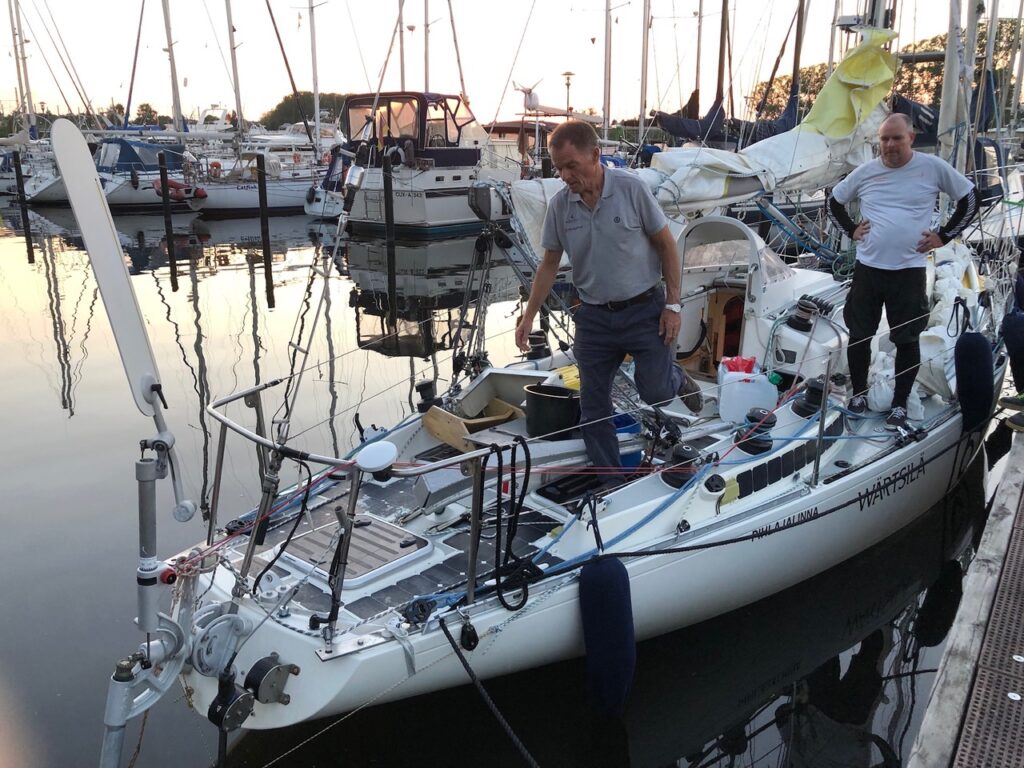 As readers will be aware, I worked very closely with Tapio between 2016 and 2019. We seemed to be very much on the same wavelength, exchanging hundreds of e-mails and cooperating very effectively. It was a lot of fun for both of us and an experience for which I am most grateful.

Having had a unique insight into Tapio’s first GGR campaign and followed his second with keen interest, I would like to share some observations and thoughts that may perhaps be relevant to Asteria’s sudden loss. 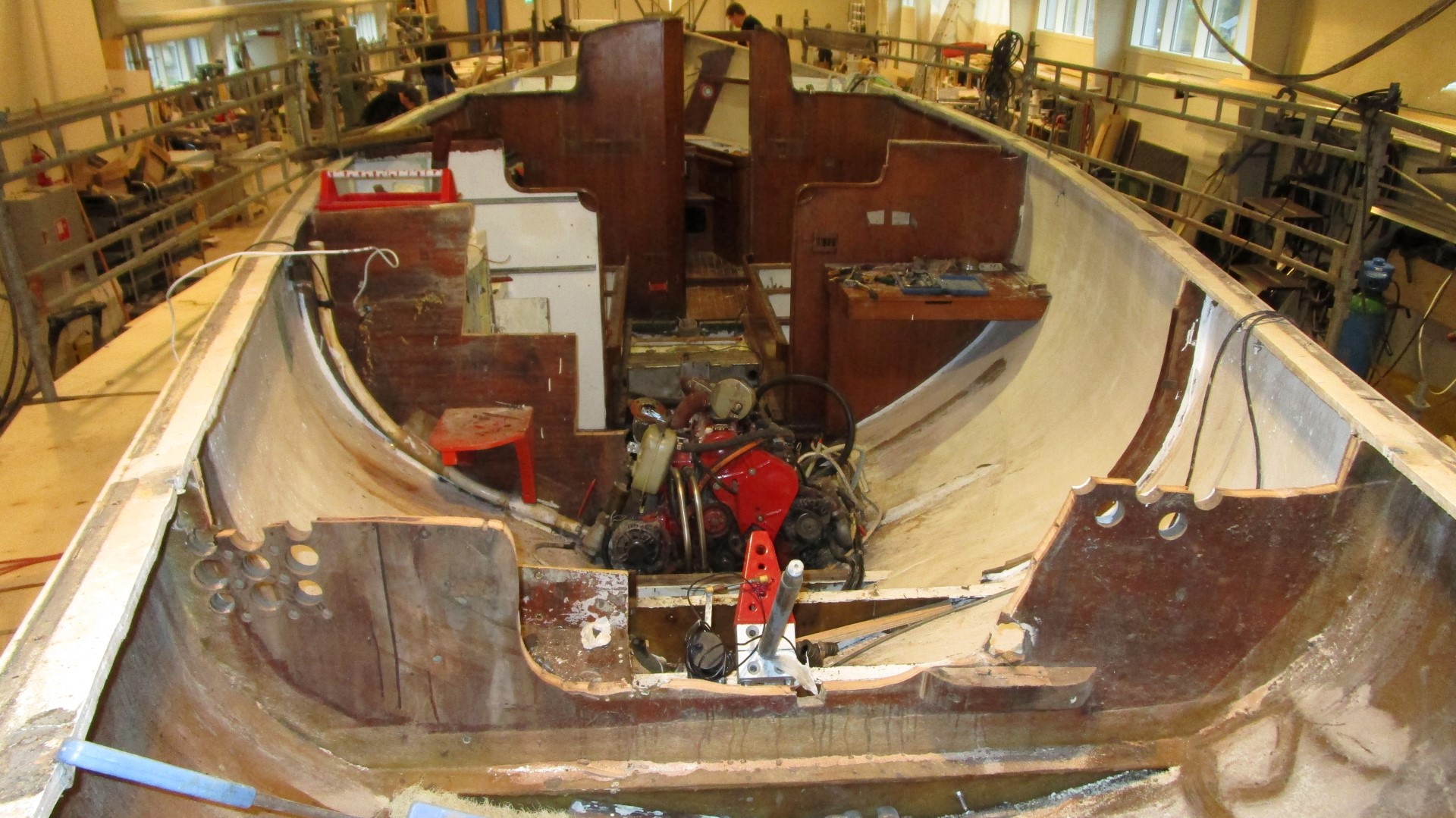 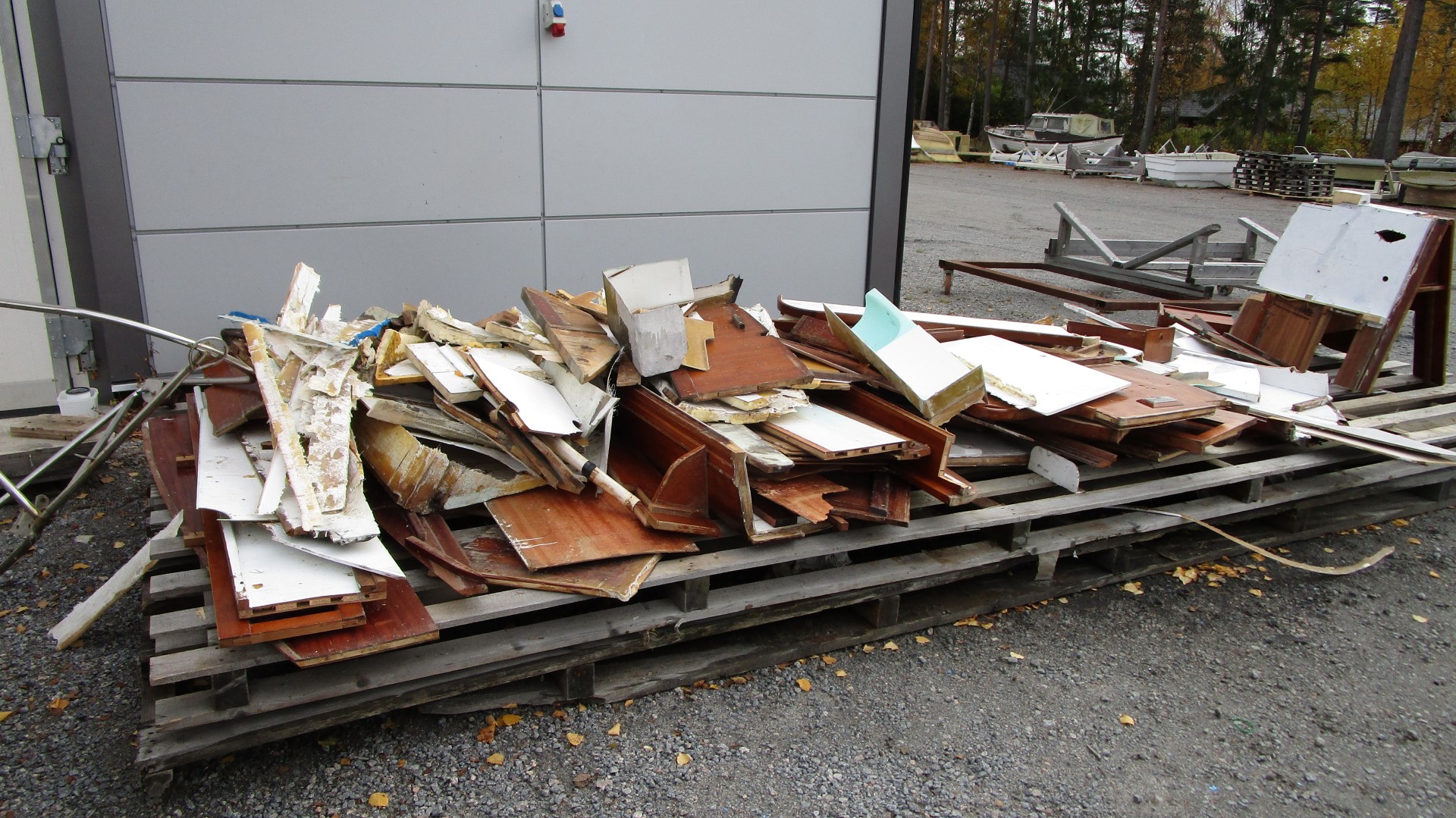 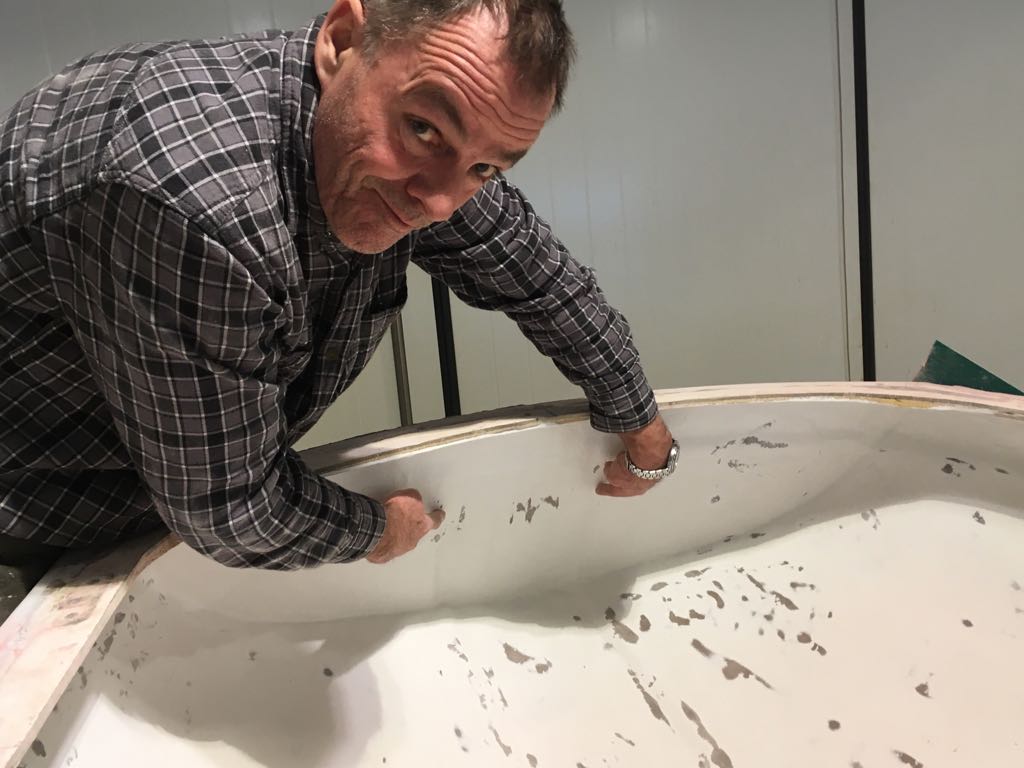 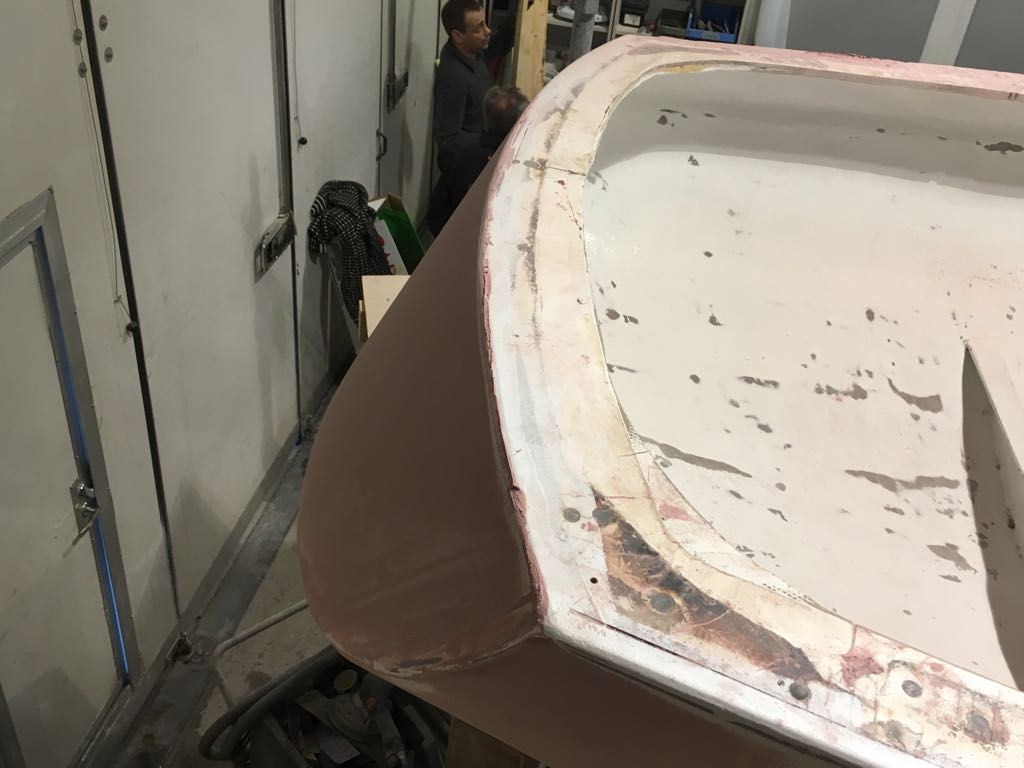 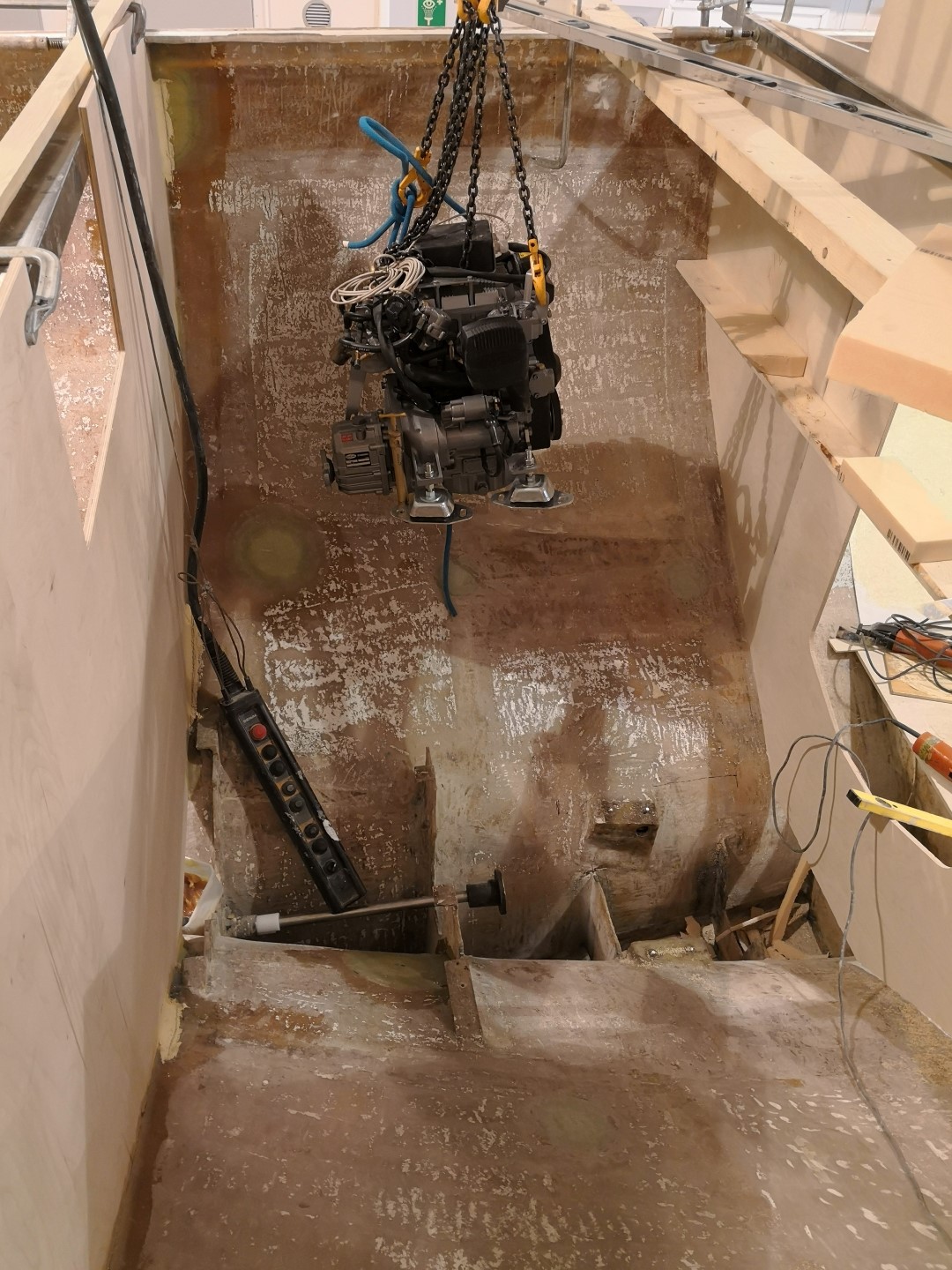 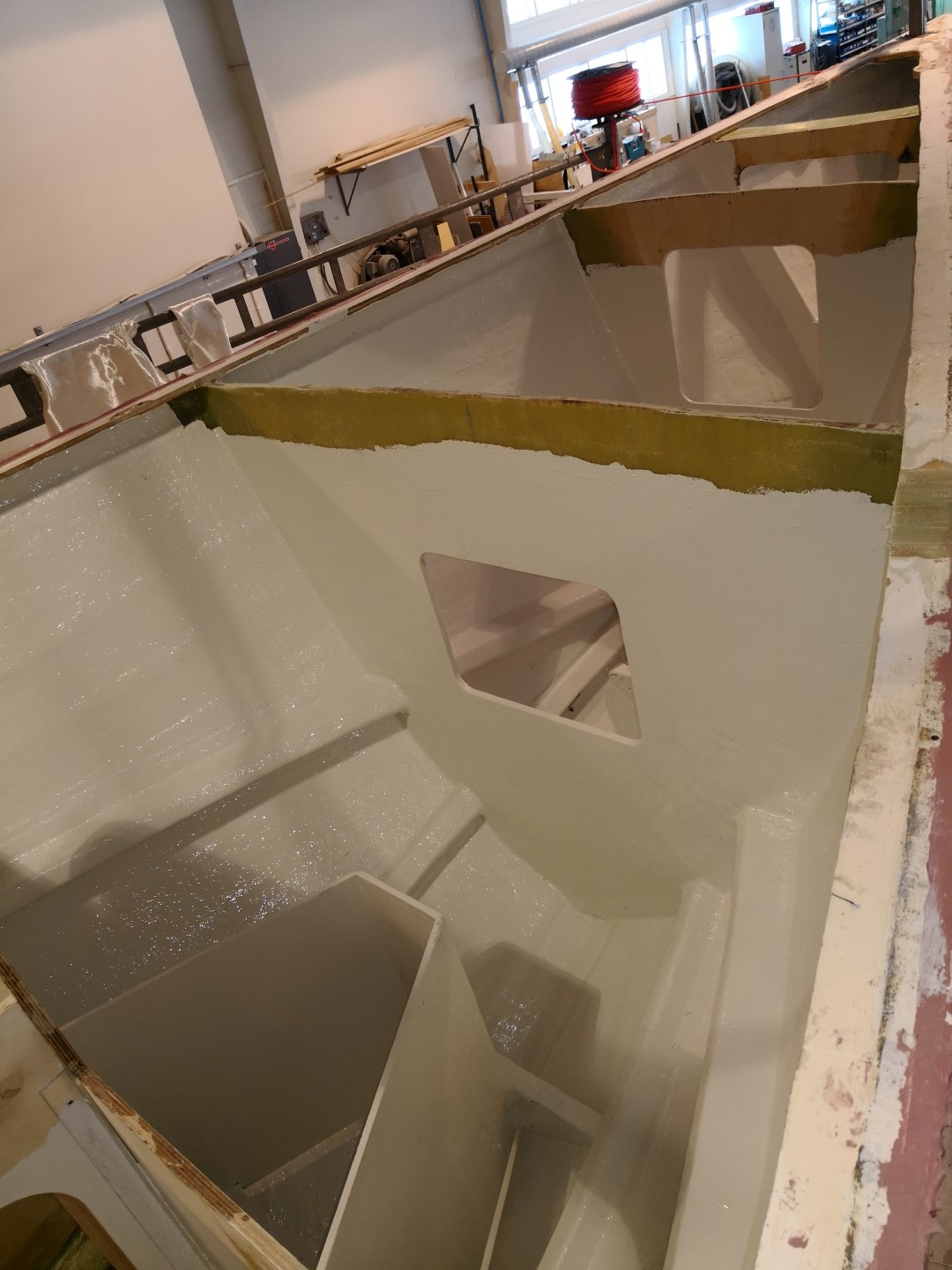 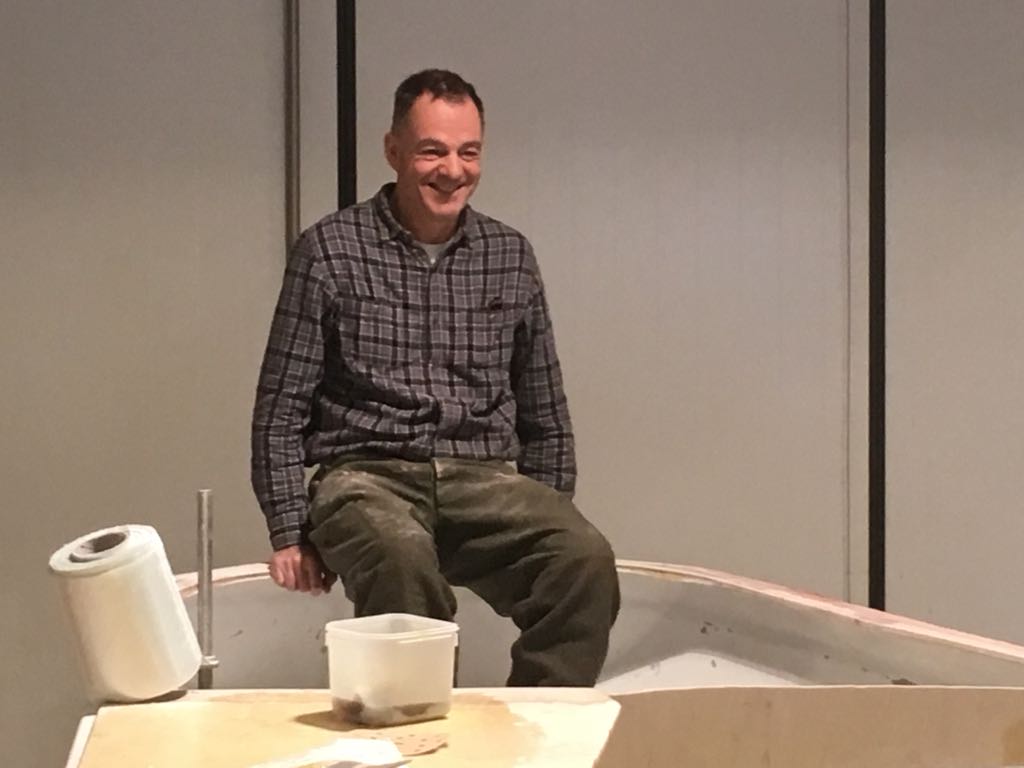 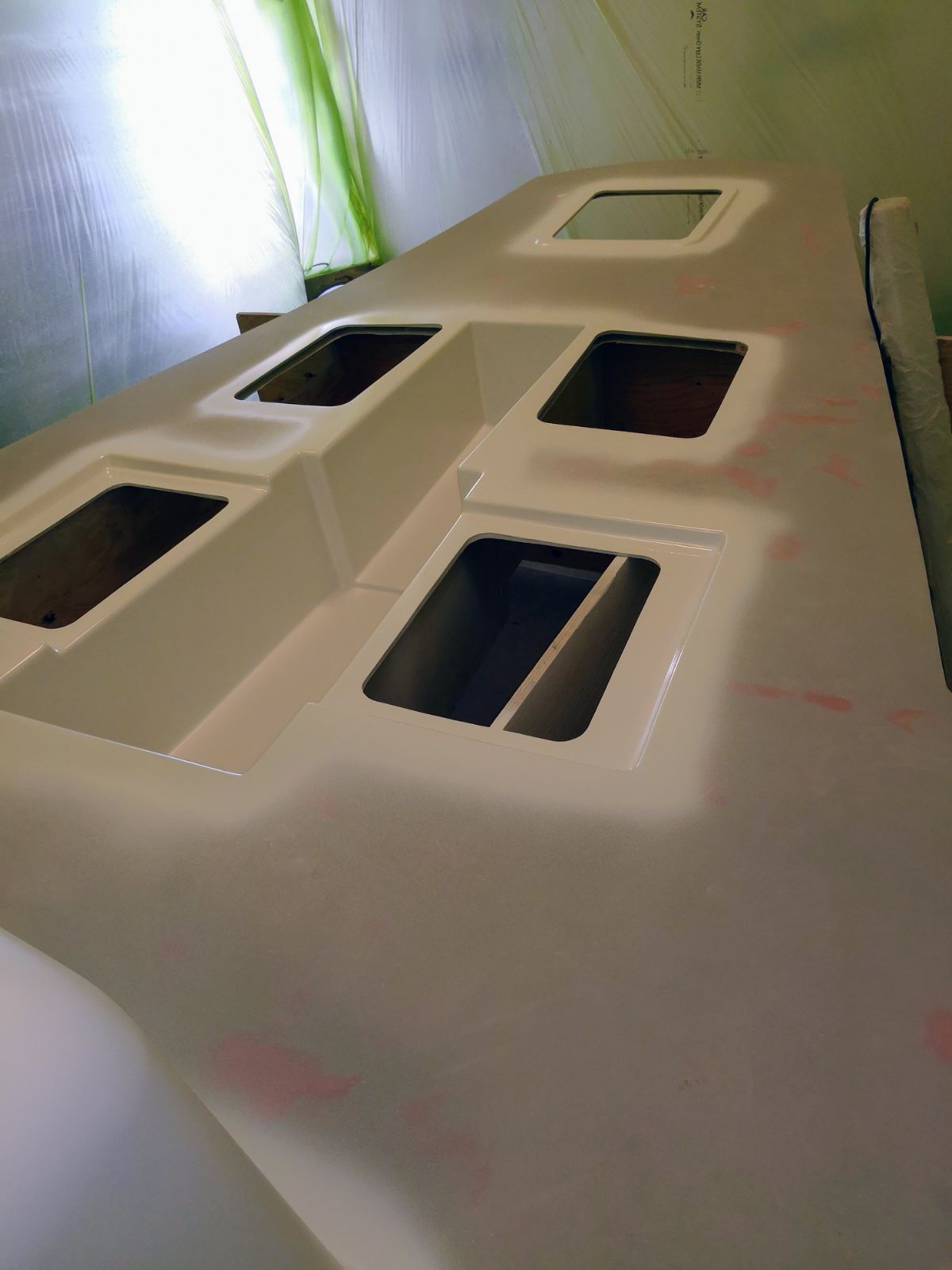 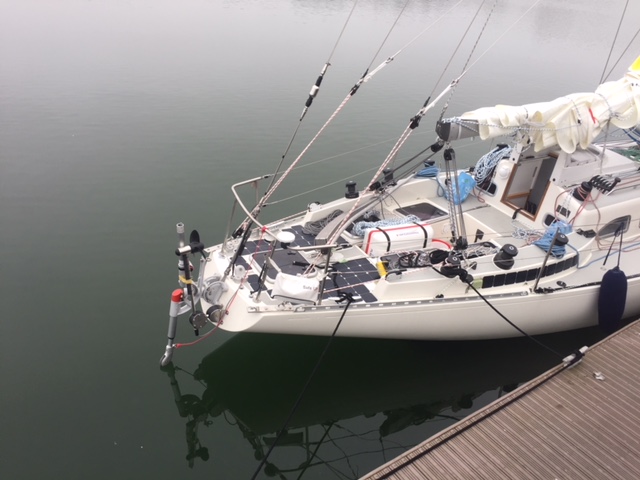 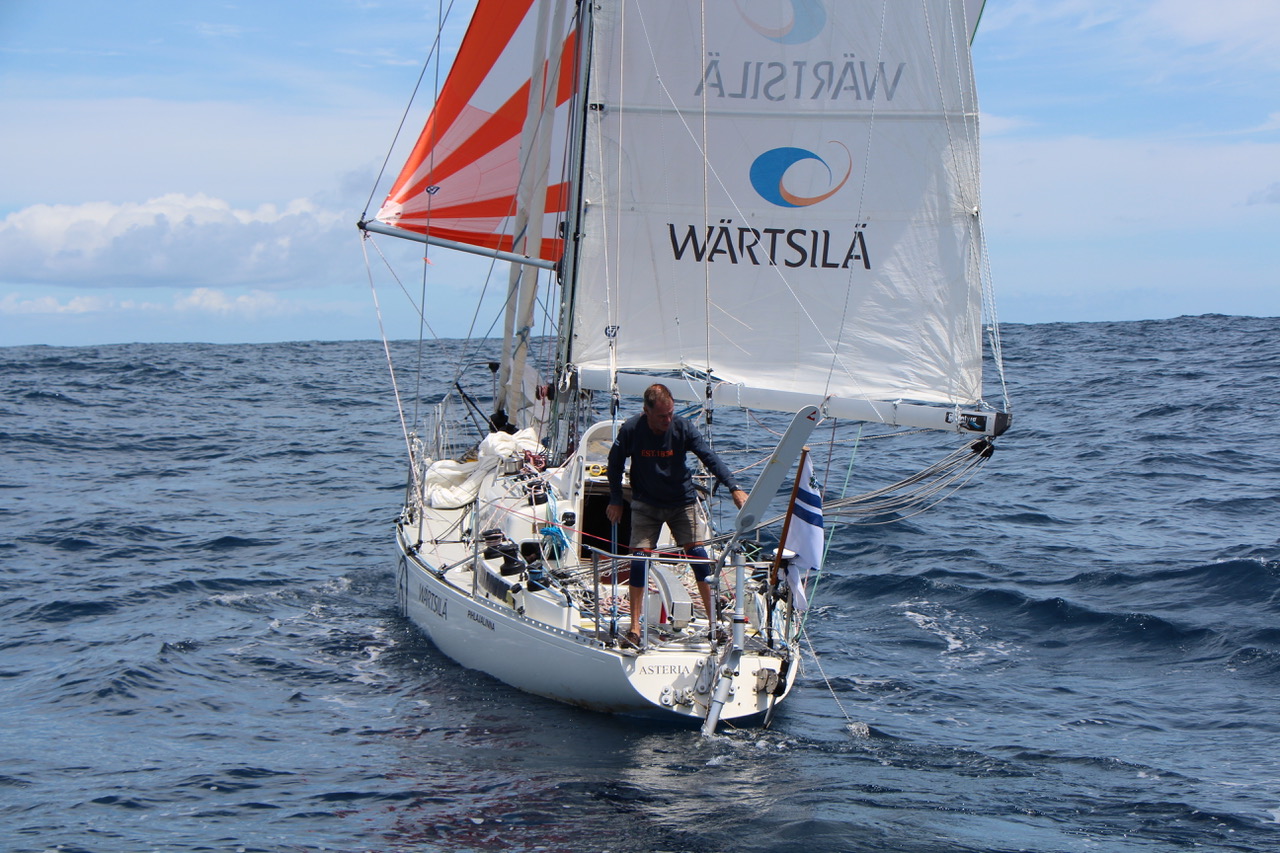 The “refit” – in truth not far short of a complete reconstruction – of Asteria has been comprehensively documented and one has to presume all of the details were shared with the organiser of the GGR during the process.

According to Yachting World:

Besides three watertight bulkheads and foam buoyancy in the bow, Lehtinen added an additional pair of watertight bulkheads aft, which were not specified in the safety requirements of the race rules but he built in for added security. The first was just forward of the rudder tube, the second a few feet further forward. All through-hull fittings were position between the two to try and eliminate the risk of a failed skin fitting flooding the boat.

The photos I have to hand of Asteria’s refit do not allow me to verify exactly what was done in terms of aft bulkheads but it certainly appears all the bulkheads were installed before the deck was added. 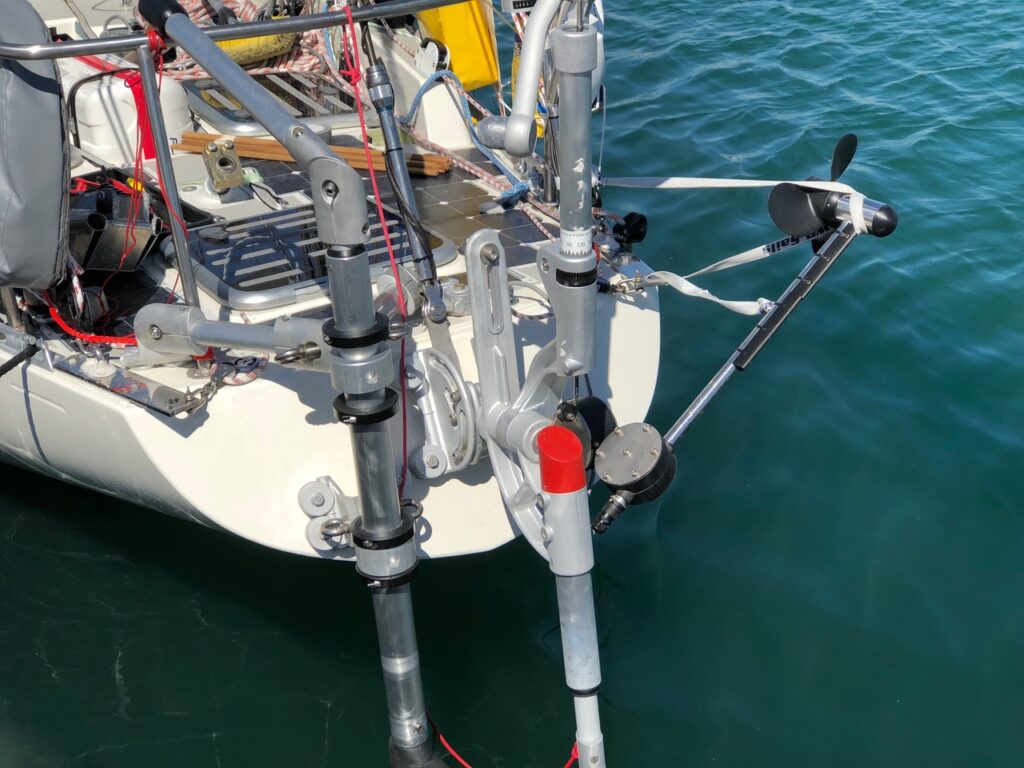 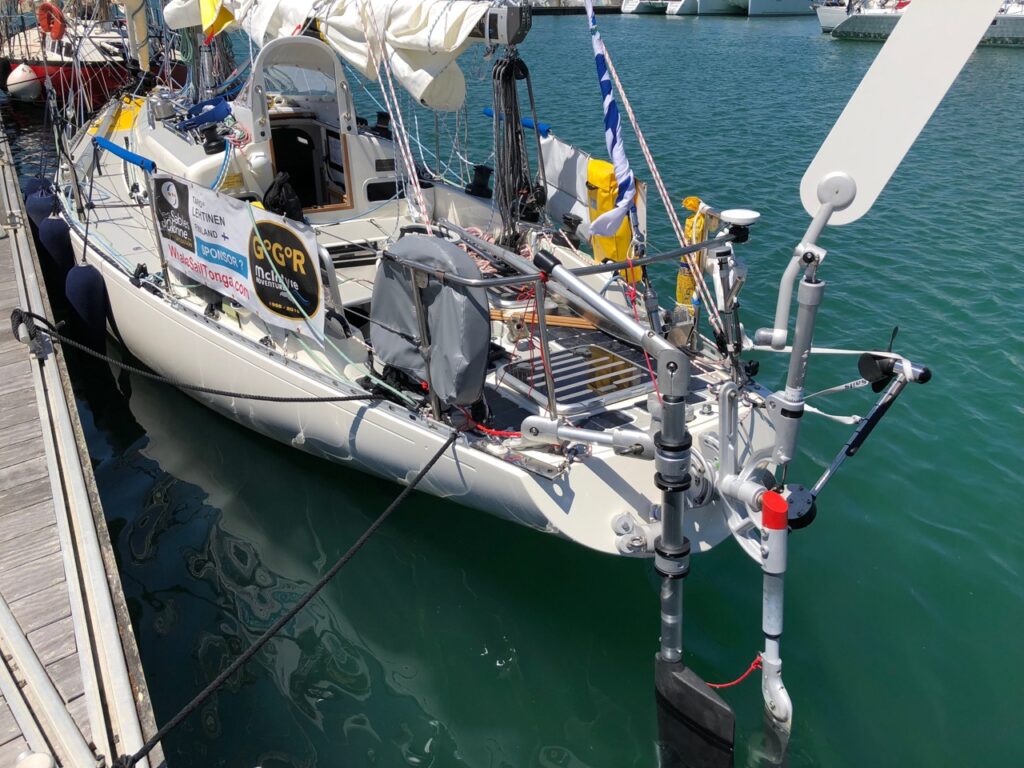 When I was working on Asteria, the only fittings in the stern area were the mounting for the Windpilot Pacific, two brackets for a SailingGen hydrogenerator and, on the port side, the bracket for an SOS Emergency Rudder (which was not required during the GGR 2018 and remained safely stowed below deck for the entire trip).

All the stowage compartments aft of the companionway were only accessible from the deck and were sealed with watertight hatches, an arrangement that Tapio clearly retained for the 2022 race. 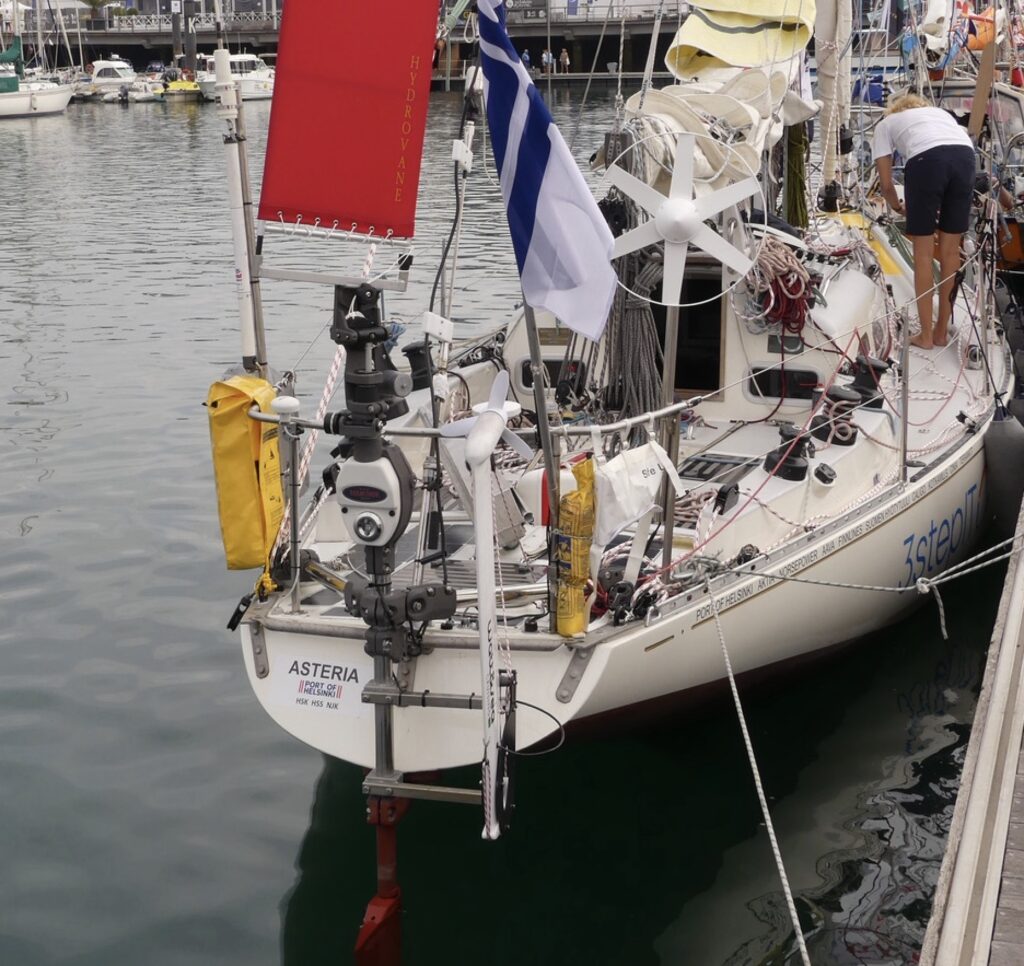 First principles tell us that the greater the spacing between the upper and lower mounting brackets of an auxiliary rudder system, the better the loads will be transferred to the hull. One of the striking features of Asteria, however, is its unusually low freeboard, which has inevitable consequences at the stern: Asteria’s transom measures just 40 cm (a little under 16 inches) bottom to top. The lower edge sits about 30 cm (one foot) above the static waterline. I presume it was a desire to space the mountings as far apart as possible that led to the Hydrovane’s lower bracket being installed on the underside of the hull rather than on the transom. While this might go some way to addressing one issue, it also potentially creates others: 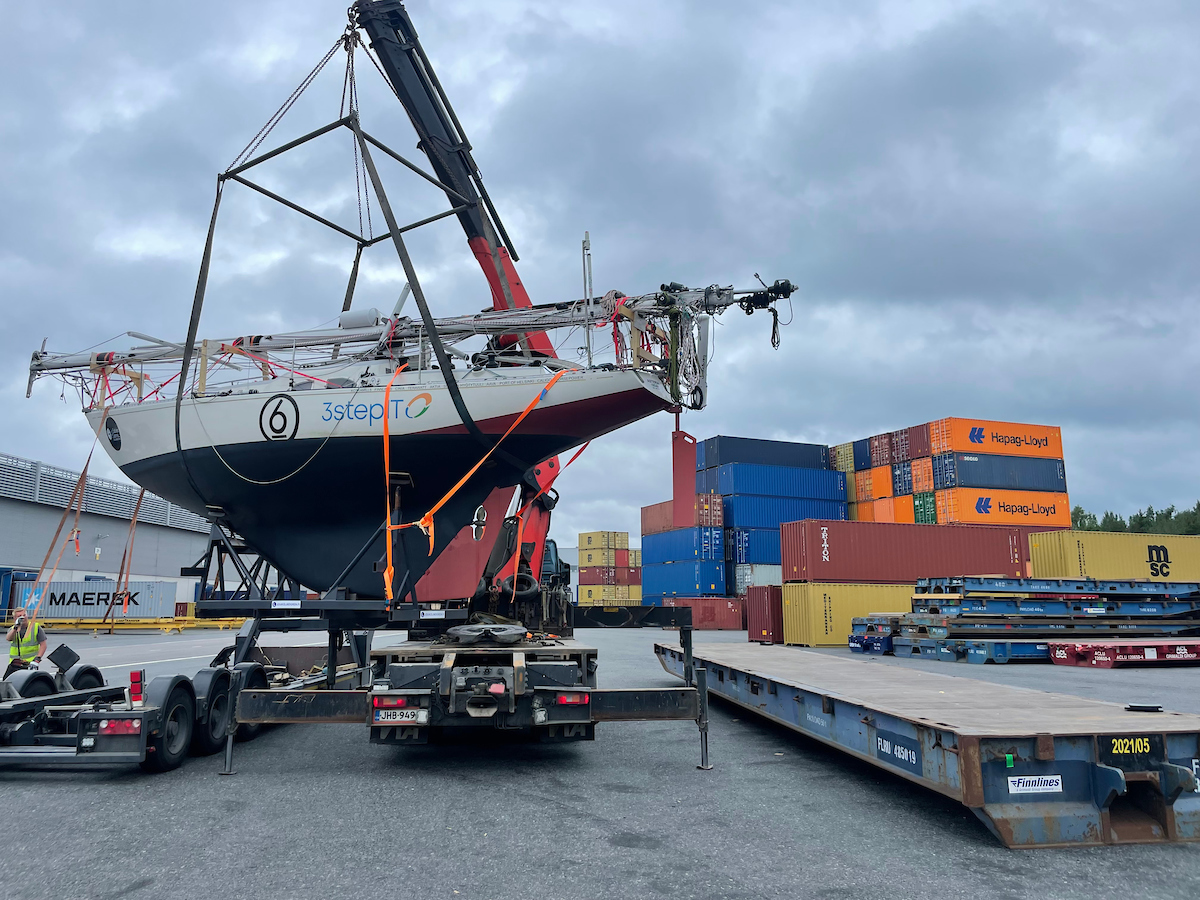 1. The underside of the hull aft may not be as strong as the adjacent transom – almost all GRP boats use a thicker, stronger laminate for the transom than for the rest of the hull because of the additional loads encountered in this area due to backstay attachments etc.
2. The distance between the vertical axis of the Hydrovane rudder shaft and the lower bracket is greater than it would otherwise be because the bracket is arranged horizontally rather than vertically – and more distance here means more leverage being exerted on the two vertical M10 bolts and the laminate through which they are fastened.
3. The horizontal positioning of the lower bracket means that the bolts (usually M10 bolts, which have a shaft thickness of 8.5 mm excluding threads) sit at 90 degrees to the direction of loading and are therefore also exposed to shear forces.
4. The underside of the hull is not a flat surface. It is distinctly curved in this area, so a wedge-shaped adaptor is required to accommodate the flat Hydrovane mounting bracket.
5. The whole of the lower part of the structure on which the Hydrovane is mounted will almost always be underwater when the boat is moving because the dynamic waterline extends all the way up to the bottom edge of the transom (which is why the antifouling extends so far up the topsides).
6. The bolts attaching the lower bracket for the Hydrovane are through-hull fittings but they are not positioned between the two watertight bulkheads referred to in the Yachting World report. 3. There are two mounting struts at the top versus just one at bottom where loads will tend to be higher. This means that it presumably falls to just two M10 bolts (M10 bolts fastened to a convex hull surface) to transfer all the loads generated by the system at the lower end. 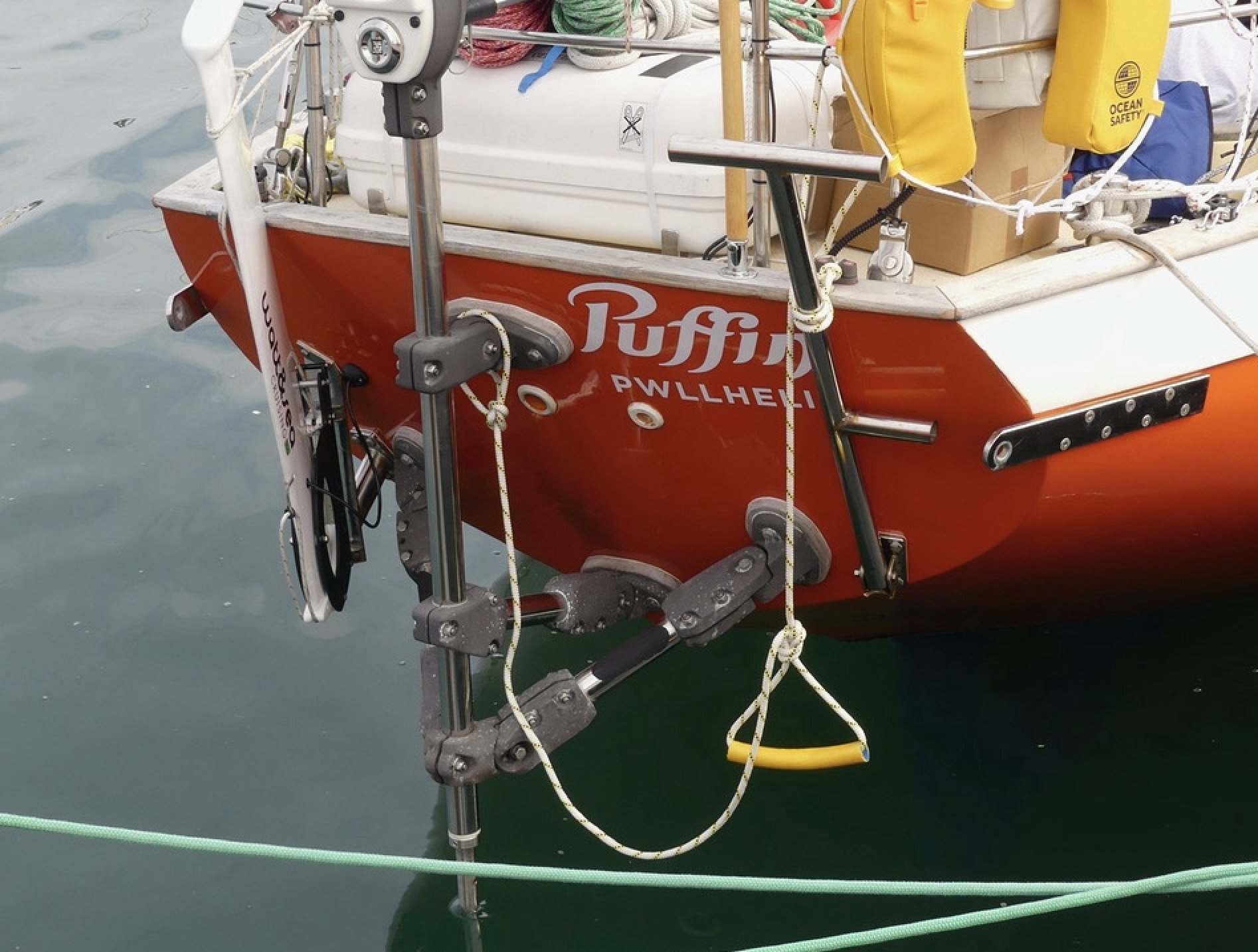 My fear is that the very substantial leverage generated by the auxiliary rudder system was more than Asteria could safely absorb indefinitely and that after 8,000 nautical miles or so, that lower mounting bracket began to work loose and the whole system began to move. This would only increase the loads passed to the hull and since the lower bracket is generally submerged at sea, any hull damage in this area would be a serious problem.
Tapio says, “I woke up to a loud bang”. There has been no mention of any impact or rig damage, so might this sudden noise have been the auxiliary rudder system bracket pulling out of the hull? It is not inconceivable that the rate of water ingress through the resulting hole could sink a boat in minutes.

I understand this is speculation and that we may never know what happened – indeed Tapio himself may have no idea what happened – but having spent a large (!) part of my life thinking about the best ways to mount windvane self-steering systems on boats, I cannot help but share my concerns.
Hopefully we will hear Tapio’s thoughts on possible causes of the sinking when the time is right. This, of course, is by far the most important element of the story: whatever it was that befell Asteria, at least we have only lost a boat.

UPDATE 21.November 2022: Tapio is describing the entire situation in finnish language He is mentioning that a collision has not taken place.

UPDATE 22.november 2022 from Finland is being reported that obviously Tapio told the Finnish broadcasting campany Yle, that the bang might have been the aft bulkhead collapsing.

My sense is therefore is that while the steering system attachment theory has some merit, it is more likely that there are multiple factors involved, and that those may or may not include the self-steering system.

As a side note, in the IOR/RORC days, high backstay tensions were capable of “banana’ing” a boat. This typically resulted from over tensioning the backstay and pulling up on the transom. This forced the topsides outward sheering the hull to deck joint and tearing the tabbing on the bulkheads. While it does not seem likely that this is the cause of the sinking, it is possible that something similar damaged the bond between the bulkheads and the hull. But this last comment is wild conjecture on my part, 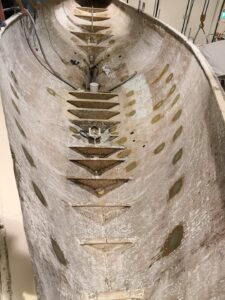 Tapio will presumably be able to provide answers here. For the GGR 2018, the Asteria was equipped with a particularly strongly dimensioned new mast including reinforced shrouds, whereas in the hull there are presumably no longitudinal stringers in the stern, as can be seen in the photos. It is therefore quite conceivable that the assumption made by Jeff Halpern could be correct. 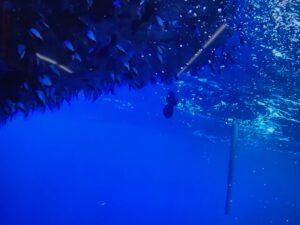 In June 2019, I met Tapio in Rendsburg. We let our thoughts wander in the evening sun. Tapio was already determined to offer his Asteria the same voyage again without a shell escort. Presumably the regatta sailor in him was his whip. He almost seemed sad that he didn’t have to face any heavy storms. Do I remember correctly that he would also have liked to pass a capsize once? In any case, skipper and ship appeared as one, Tapio’s unbounded confidence was contagious: ship and rig bulletproof. It could have all worked out! But it didn’t!

The Asteria probably inspired awe in every observer, for the mighty mast with enormously strong rigging gave no thought to how it was introduced into and carried by the hull? Could it be that Tapio or his advisors in Finland also lost sight of this aspect a little? A slender hull, presumably without any longitudinal stringers in the stern, raises exactly these questions in view of the sinking.

With today’s knowledge, I would consider the sinking of the Asteria to be tremendously lucky for Tapio, because the sinking happened in calm weather and help was quickly at hand. Tapio was saved, his life goes on. Presumably, the survival of this solo sailor would hardly have been possible in heavy weather or even a capsize, because the Asteria would have collapsed and sunk within minutes. The rescue of the skipper could then have become a challenge.

A different outcome of this disaster would also have been fraught with devastating consequences for the organiser, because well-rehearsed professional measures could fail if the basic substance of a ship was not sufficiently considered.

Seen in this light, the rescue for Tapio is also a blessing for Don, a good fortune that should not be put to the test, in my opinion.

REASONS ABOUT WHY ONLY TWO WINDPILOT ENTRIES IN GGR 2022?