Back to earth with a bump – experiences of an owner

A blog about motorboats? Are you serious? Why would sailors want to read about stinkboats? We know what they’re like, we know we don’t like them and that, frankly, is that. But then along comes the Hinckley Picnic Boat… 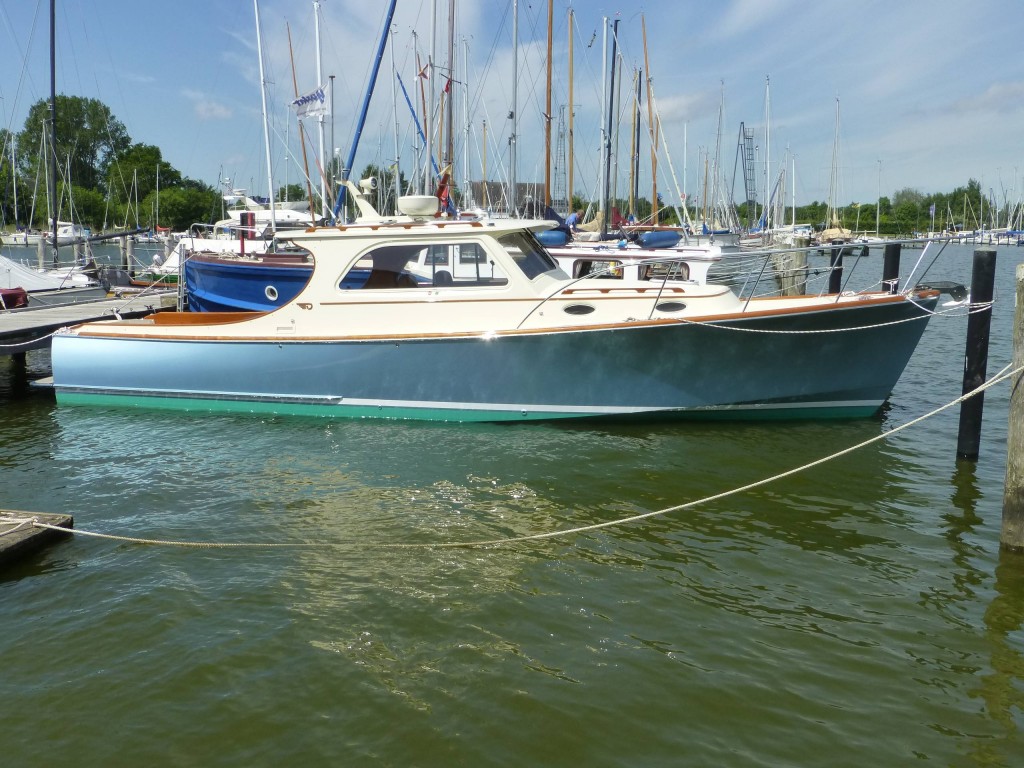 Hinckley Yachts made its name building beautiful sailing yachts, earning a reputation as something of a US equivalent to Abeking & Rasmussen, and only turned its attention – and its penchant for creating iconic craft – to motorboats at the beginning of 1990s. The Picnic Boat has since established itself in the mind of mariners of all persuasions as something really rather different, indeed exceptional. Why? Well, it combines:
– the look of traditional lobster boats from the desk of Bruce King,
– advanced manufacturing methods using Kevlar and vacuum bag laminating technology applied with the meticulous care of the traditional master boat-builder and
– the revolutionary use of a jet drive operated through an innovative joystick control system.
The Picnic Boat shares many of these features with Hinckley’s Talaria range of 34- to 55-footers see. 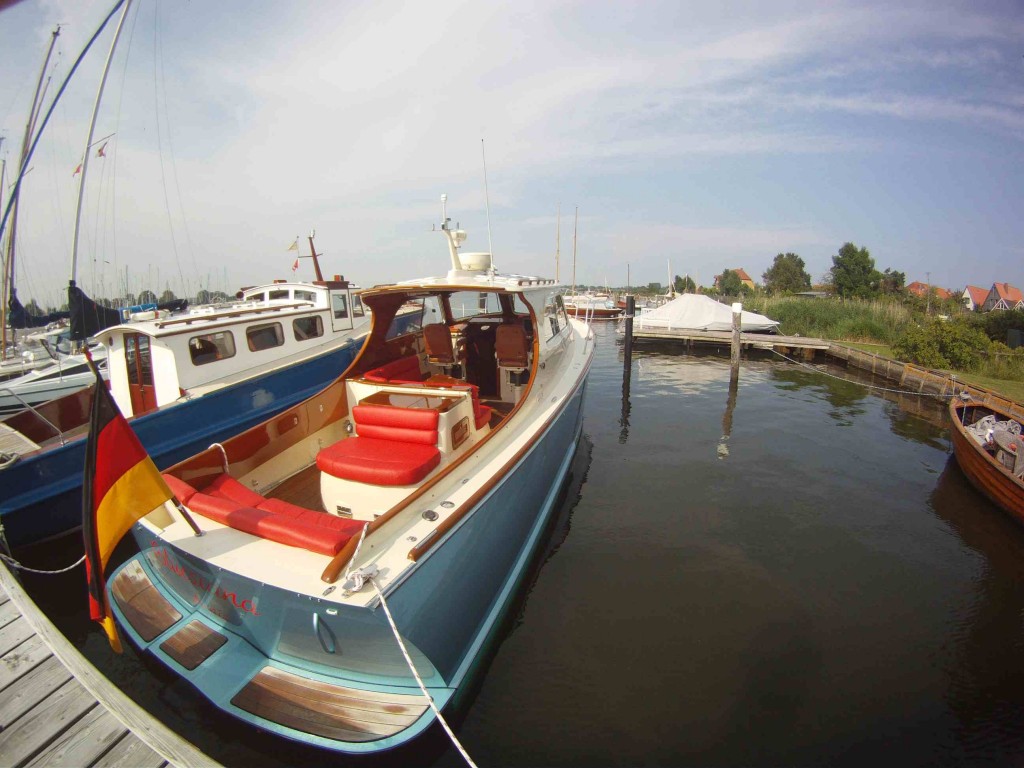 The Picnic Boat makes an irrational choice of vessel, at least by conventional standards. A toy boat for enthusiasts – only around 380 of the original Bruce King design were built before its replacement in 2007 – it defies comparison: there’s simply nothing quite like it out there see.

Over the course of countless trips to the US I became thoroughly fascinated with the Picnic Boat and swore that one day I would have one to call my own.

Twenty years passed without progress: buying one new was never a realistic proposition and the prospect of buying pre-owned in the USA holds little appeal once shipping, EU customs duties/tax and CE conformity marking have been taken into account. These obstacles, as much a deterrent for hard-headed commercial importers as enthusiastic individuals, no doubt go a long way to explaining why Picnic Boats remain so scarce in the EU. The yacht itself had no trouble turning heads at European boat shows. If only the price list didn’t bring on palpitations! This initial lack of success did nothing to cool my ardour though and eventually an example that had been several years in search of a buyer found its way to me. And here begins the tale of how reality so rudely intruded upon my dreams and left me up to my neck in, well, too much reality. 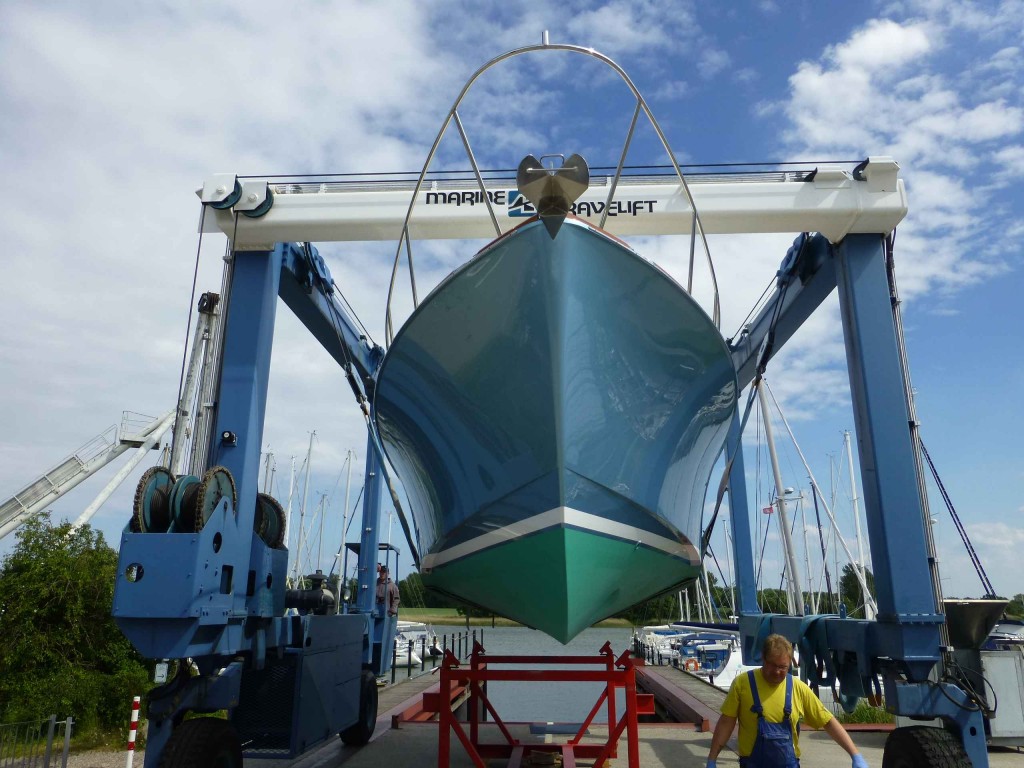 FROM DREAM TO REALITY
The moment of truth came on 6 June this year, the Friday of the Whitsun holiday weekend, at the yard of Hinckley’s German representative in Kappeln. The Bluesiana, freshly inspected and approved, was resting gently in one sling of the travel lift waiting for a final check of the engine and JetStick functions when, whoa Nelly, what was that? A red warning light appeared on the dashboard: the boat’s central processor, essential for the proper functioning of both steering and propulsion systems, was out of action, so manoeuvring properly under power was not an option. Given that it was Friday evening, we decided to press on and manhandle the boat into place with (long) boathooks. Softly softly with the engine idling we travelled the mile or so to the berth. 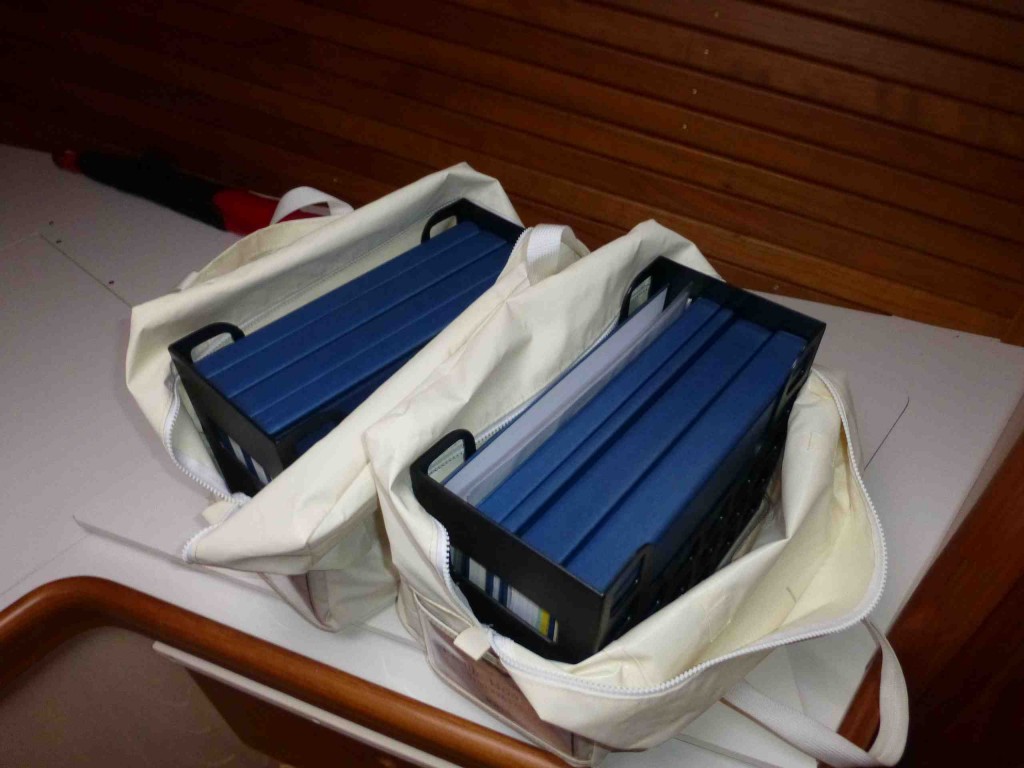 There followed a most unusual Whitsun weekend of damage assessment and a crash-course in the complex technical idiosyncrasies of a boat like no other. Ten (!) bound manuals in two robust sailing bags – the standard complement for a Hinckley – were retrieved and examined: surely there must be some explanation in there somewhere? My first thought was that the JetStick manual must have gone astray at some point in the boat’s previous life, but it turned out to be simpler than that: there never was one! Instead of a manual, I have gotTechnician Guide from the Hinckley Service Departement, in top of that I have downloaded an „instruction book“ from the internet – both left me puzzled instead of providing the helpful assistance that I was looking for – please read on your own …. iqan-mdm_uk_ed0607_Parker Original

Buying a Hinckley new is not like buying an ordinary boat. All newbie jetboat owners are offered a personal induction and training course including a detailed introduction to the boat’s technical systems, for example, which presumably reduces their need for manuals. Another unusual feature, at least as viewed from this side of the Pond, is that a large proportion of the Picnic Boat fleet (the great majority of which remains in the US) operates under full service agreements with the various Hinckley bases – compare. Picnic Boats located outside the USA do not enjoy the support of a comprehensive service network, so their situation is quite different.

Faults and breakdowns are never welcome, but there can be a certain satisfaction in finding and fixing them – assuming, of course, that we have some way of gaining a toehold with the technology concerned. Most US-based owners with a full-service contract and the advantage of having attended Hinckley’s personal induction course probably never notice the lack of comprehensive documentation. Up here in Northern Germany, however, I was on my own and it was frustrating to find myself without the information I needed to get to grips with a show-stopping problem. 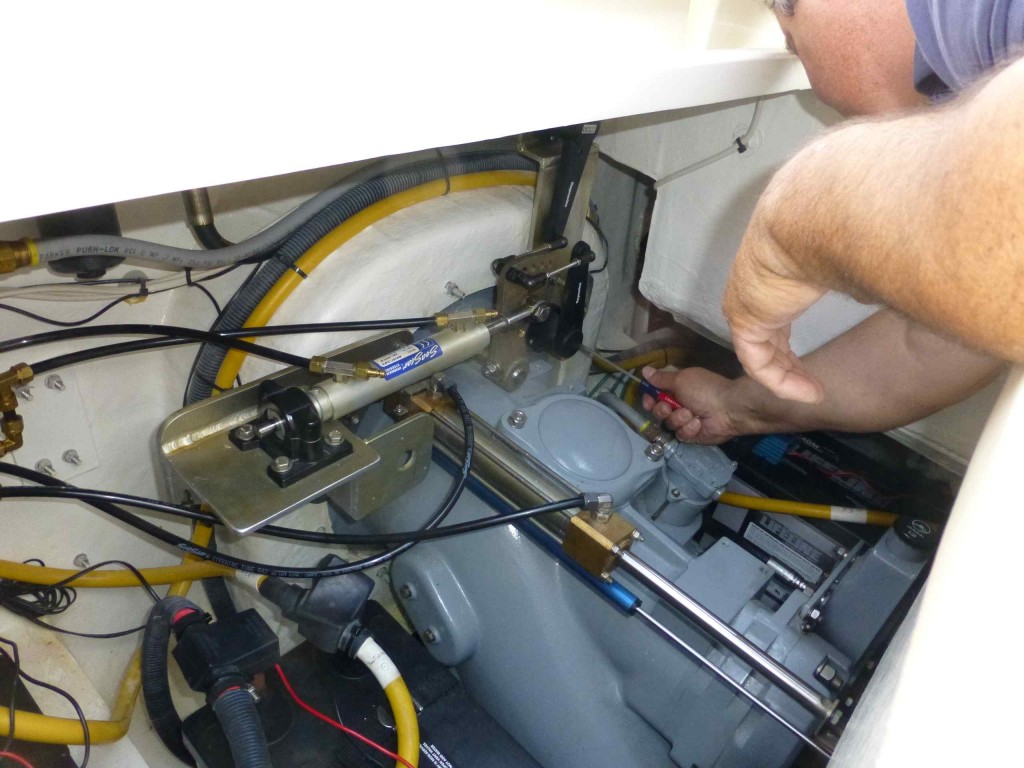 JET DRIVE
As I have already mentioned, one of the features that really sets the Picnic Boat apart is its jet drive system. The Hamilton jet drive, a powerful water pump is installed inside the boat, so both propulsion and steering systems have nothing to fear from flotsam, lobster pots, fishing nets or grounding and there is none of the noise and vibration normally caused by a propeller. The nozzle through which the water jet emerges pivots in the horizontal plane for steering while reverse thrust is achieved by lowering a deflector into the jet stream. Robust and effective, the system has become widespread in commercial shipping and personal watercraft: it can even brake you from 30 kn to zero within a boat length (ladies and gentlemen, the fasten seatbelts sign is on).

JETSTICK – TM
Originally developed by Tom Serrao in 1995 at the request of the then co-owner of Hinckley Yachts Shep McKenney, the JetStick is a joystick-type controller providing three-axis control of a type widespread in mechanical engineering applications:
X axis: bow thruster
Y axis: deflector (forwards/reverse)
Z axis: proportional steering
Key to the system is the way that the hydraulic cylinders driving the steering and deflector elements can be precisely controlled with a progressive yet minimal application of current. This gives the boat a level of manoeuvrability unthinkable with conventional drives. The jet always pumps in the same direction and both the nozzle and the deflector automatically return to their neutral position after every action, allowing the boat to turn and stop at will. Conventional bow thrusters only move the bow sideways, but the jet drive gives both bow and stern ballet shoes.

THE CONTROL UNIT
At the heart of every jet boat there lies a control unit to execute the commands received from the joystick and actuate the very precise hydraulic cylinders (and, in the case of the bow thruster, the electric motor) that realize the necessary movements along the three axes. At least two distinct types of system have emerged over the course of the development of the JetStick control unit. 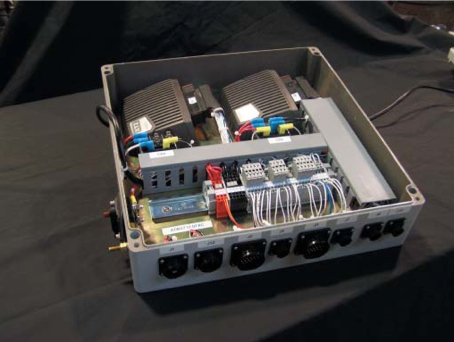 One common type relies on a microprocessor, borrowed from other industrial applications and programmed with software matched to the vessel, to execute all control commands electronically. This is the type of system I found installed in my boat and it is here that the blame lies for my underwhelming introduction to the rarefied atmosphere of Picnic Boat ownership: the system on my boat turned out to lack any kind of internal redundancy, so a microprocessor failure meant no steering and no propulsion control. 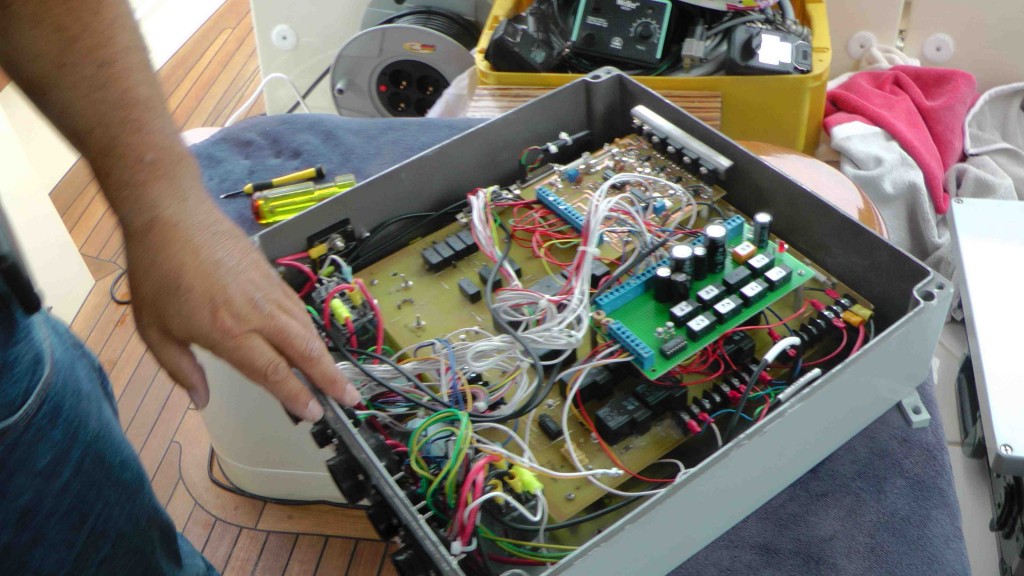 Another widespread controller option centres on a custom-built analogue control unit configured specifically for the boat concerned. Dedicated parameters are preset for each control command, with the properties of the steering elements – oil flow, motion, hydraulic cylinder end stop and return to required centred position – being established/adjusted/assigned electrically and via potentiometers. There are no microprocessor components or software, as every control command is calibrated separately and can be reproduced as required by the system for as long as there is pressure in the hydraulic pump and charge in the battery. Malfunctions are thus virtually out of the question, especially with the components being built to military standards.

DECISIONS, DECISIONS…
But back to the story: we have a boat with a defective central processor, it’s Whitsun weekend and there seems no help to be found anywhere – even Hinckley’s German representative has no ready advice to offer. A spell of internet research yields contact details for various potential sources of help and I send out a few hopeful e-mails.

First to respond is Tom Serrao of Control Engineering. Tom, a control systems specialist with many years of experience with applications of all kinds, from amusement park rides to medical, telecommunication and marine systems, has his name on a number of different patents relating to what became the JetStick compare, so he certainly knows his stuff.

We exchange a flurry of emails (from on-board via WiFi in my case) as the possible causes of the fault are probed and tested: the processor is frozen and while rebooting does clear the red warning light for a few minutes, it soon returns. Fortunately we were able to isolate the problem. Unfortunately, I learn, it is going to be a case of replacement rather than repair (it eventually transpired that the microprocessor fitted to my boat had lost its memory and that there were two short-circuits on the JetStick control board). 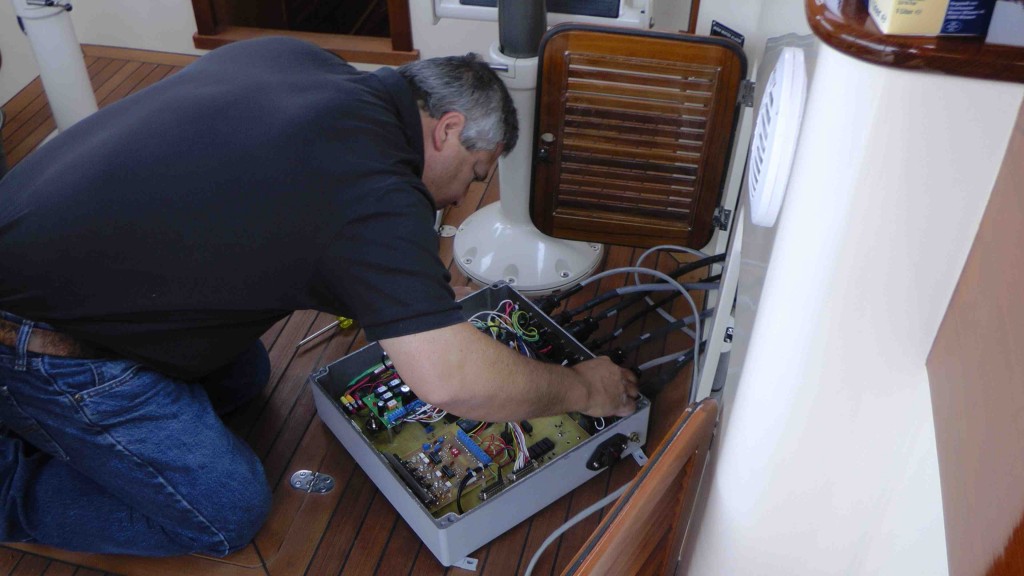 Having traced the problem, Tom offered me a solution: replace the deceased microprocessor system with a Control Electronics JSC2100SJ type analogue control unit. I had a fix then, but it was one with not insignificant financial consequences, so I requested a few days to think it over.

There followed another round of detailed e-mail correspondence with Tom Serrao, at the end of which I had to admit his case was compelling. The great strength of the analogue control unit as I see it is that it includes a redundant system to maintain steering in the event of a fault (if I’m going to wreak havoc in the marina, I’d far rather it be down to operator error than mechanical failure). On reflection, I also couldn’t help thinking that a custom-made system like this had a much better chance of withstanding the slings and arrows of life in my wet and salty world. The analogue option had pedigree too, I learned, having been regularly installed in Picnic Boats up until about 2006.

Tom Serrao installed his system, carried out sea trials and handed the revitalised boat over to me all in the course of a four-day visit to Germany. 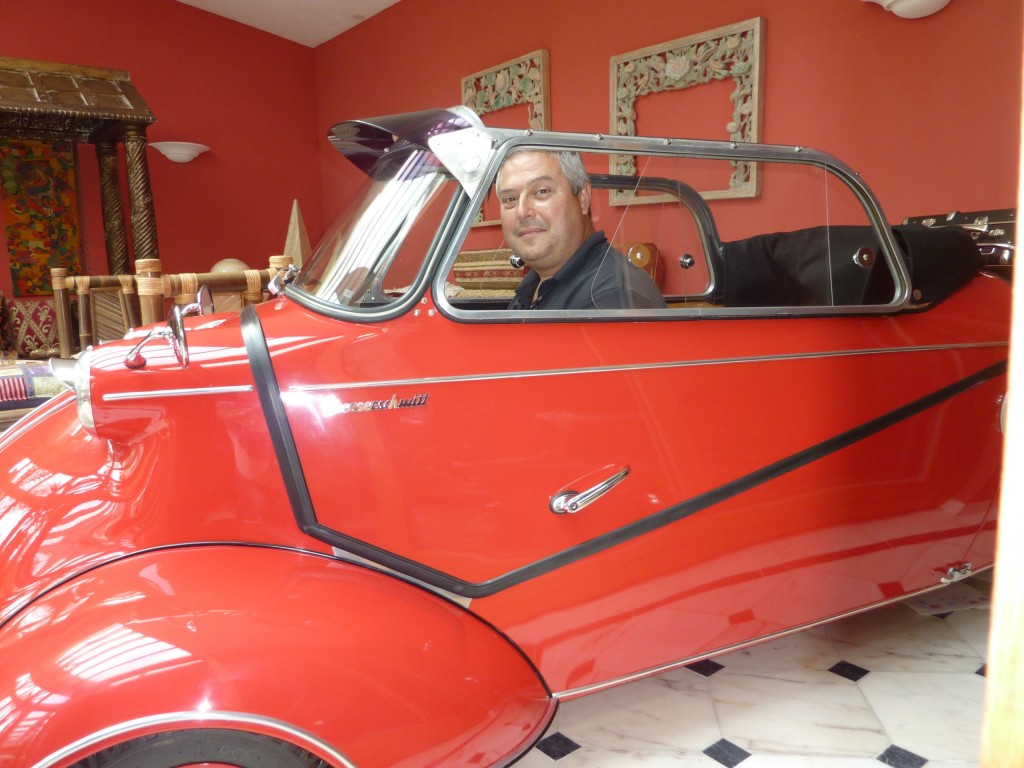 He had no big marketing pitch but he knows his subject inside out and I found myself thoroughly won over by his friendly and thoroughly authentic manner, his obviously profound expertise and his quiet, methodical approach. 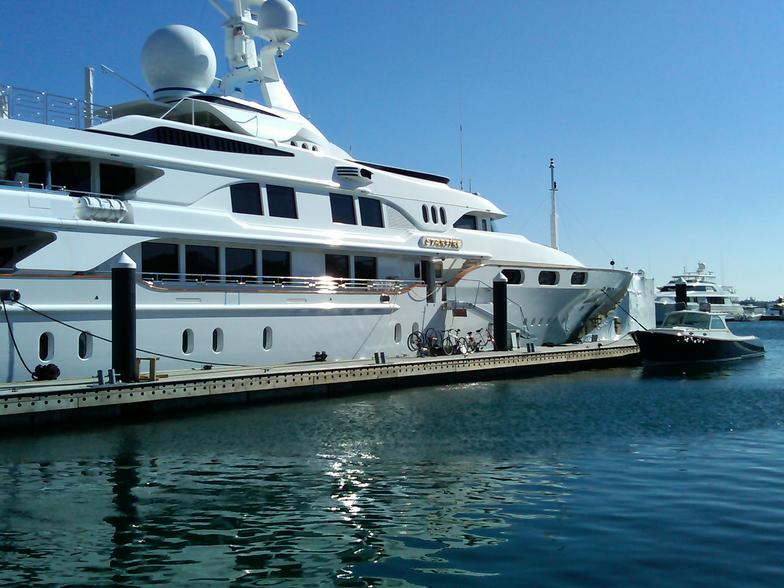 Down to earth with a bump: not for the first time I live and learn! Still, not that my Picnic Boat has a new heart implanted by the experts’ expert – and with inbuilt redundancy into the bargain – it’s time I started working on those dreams again.

As I remarked to Hinckley Yachts:

Hinckley should roll a red carpet to Tom Serrao who provided perfect support within 10 minutes to a desperate owner who was in urgent need of help. Tom did a straight and perfect support yet, praising the Hinckley boats.