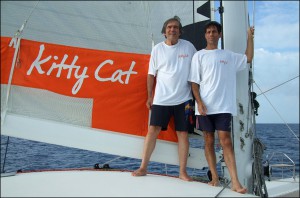 Atlantic Odyssey: a new transatlantic rally for cruising sailors.
Jimmy Cornell, the founder of the ARC (Atlantic Rally for Cruisers), is launching a new transatlantic rally whose aim is to return to the original spirit of the ARC, that of a non-competitive event for cruising sailors, with the emphasis on safety and the enjoyment of participation in this kind of amateur event.
For the first time in a transatlantic event, participants will have a choice of departing and finishing ports as well as start dates:
Atlantic Odyssey I: 17 November 2013 from Arrecife, Lanzarote to Le Marin, Martinique;
Atlantic Odyssey II: 12 January 2014 from Santa Cruz de la Palma to St George’s, Grenada.
The Atlantic Odyssey is sponsored by Puerto Calero Marinas, as well as local Canarian government and port authorities. In Lanzarote, the fleet will be hosted in their brand new venue, Marina Lanzarote, based in the island’s capital, Arrecife. Set to be the best endowed yachting facility in the Canaries, the marina will include a complete repair and service facility with two separate hoists; one of which, at 820 tonnes, will be largest of its kind in Spain. In La Palma, the boats will be docked in Marina La Palma close to the attractive capital Santa Cruz.
For the inaugural event participants will pay an all-inclusive fee of only 500 euros, regardless of the length of the boat or number of crew. Complimentary entries will be offered to families with children under 16 on board, and to other special cases. Participants in one of Jimmy Cornell’s previous round the world events will pay a reduced entry fee of 250 euros.
There will be further incentives for sailors joining the Atlantic Odyssey: complimentary docking fees for the week before the start, specially discounted fees for longer stays, reduced haulout fees, as well as discounted hotel rates for the families of participants. Every boat will be equipped with a satellite tracking device so that the vessel’s location and progress can be followed on the website www.atlanticodyssey.org
The start of the Atlantic Odyssey I will mark the 20th anniversary of Lanzarote having been declared a UNESCO biosphere reserve in 1993. The main objective of a biosphere reserve is to enable sustained economic development compatible with the conservation of natural resources, as in the case of Lanzarote. To reflect those aims, the Atlantic Odyssey will have an important environmental dimension, participants being encouraged to take part in specific research projects during their transatlantic voyage.
The finish of Atlantic Odyssey II in Grenada will coincide with the spectacular celebrations marking the 40th anniversary of Grenada’s independence.
The Atlantic Odyssey is organized by Jimmy Cornell’s company Cornell Sailing. Anyone interested in joining the Atlantic Odyssey should send an email to info@atlanticodyssey.org or complete the registration form on www.atlanticodyssey.org/register

Jimmy Cornell
An accomplished sailor and successful author, Jimmy Cornell has sailed 200,000 miles in all oceans of the world including three circumnavigations as well as voyages to Antarctica, Alaska and Spitsbergen. Thousands of sailors have fulfilled their dream of blue water cruising with the help of Jimmy Cornell’s books, among them the bestseller World Cruising Routes. With 150,000 copies sold to date, this is one of the best-selling nautical publications in the world. In 2011, together with his son Ivan, Jimmy created Cornell’s Ocean Atlas, the first set of pilot charts to be based on up-to-date satellite data of world winds and currents. This was followed in 2012 by World Voyage Planner, which gives sailors all the information they need to plan a voyage anywhere in the world.
As the founder of the ARC transatlantic rally, Jimmy Cornell is credited with having devised the offshore cruising rally concept. In the last 27 years Jimmy Cornell has organized 20 transatlantic rallies, four round-the-world rallies and one round-the-world race, with over 3,000 boats and 15,000 sailors having participated in his sailing events. Jimmy Cornell’s latest project is the Blue Planet Odyssey, a round the world event aimed at raising awareness of the global effects of climate change. Participants in the Blue Planet Odyssey will sail either a southern warm-water route, or a northern high-latitude route that will transit the Northwest Passage. www.blueplanetodyssey.com

This entry was posted in Press. Bookmark the permalink.