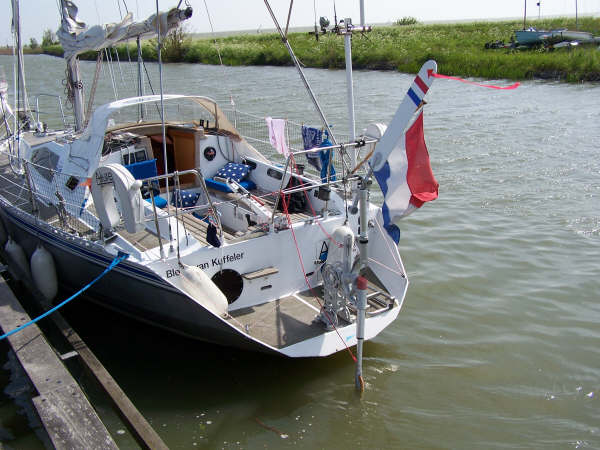 Navik: Had this on the 26′ WOD to start with. Great gear and realy quite a good system of getting good power from a small upper part (i.e. servo assisted pendulum). Links/ universal joints were plastic and prone to breakage. They were difficult to jury rig (simply carry more spares). The quick release on the water blade released when I hit about 6 knots, and involved leaning over the back of the boat to reset.. Water blade could not be permanently rigged clear of water with out removing it from the mounting (which involved leaning over the side). Overall a good cheap gear for small boats where weight is a problem and you don’t mind leaning over the side. The overall strength of the unit was „lite“.

Hydro vane: The gear was complicated to jury if ever needed (I never needed to though) less sensitive than servo pendulum gear and needed an even better balanced vessel. Sleek and simple with minimal exposed parts. Overall just not as quick to respond as other gears. Great to have the additional rudder and remove wer and tear from main rudder bearings.

Aries: Simple gear but quite a lot of frame work and possible bits to get damaged. Steered well. safety device on water blade involved snapping a sacrificial tube which then required leaning over the side to replace. Had built in rope sheaves which required a bit more maintaining than a block as the aluminum/stainless interface caused some dry corrosion.

Monitor. Smart and similarin some ways to Aries. Worked well, lots of frame work, and not easiest to reset tripped water blade.

Overall I like the windpilot although I would love to get the next model up with own rudder…..dreams…. Overall reasons are I remain inside the guardrails at all times, can set and rest the gear easily, robust and simple castings and controls, excellent service and build quality.
cheers