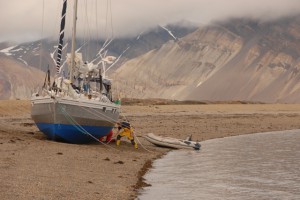 STRANDED ON SVALBARD
It all got a little tense when the polar bear came strolling towards us while the boat was safely up on the beach. High up on the beach. in fact. The start of our Svalbard adventure was a bit more dramatic than we had hoped for.

We cast off from Tromsø at 12 on the first Saturday in August and set our course North. We took the quickest way out in the open sea and slipped out in to the open sea six hours later. Bear Island next. 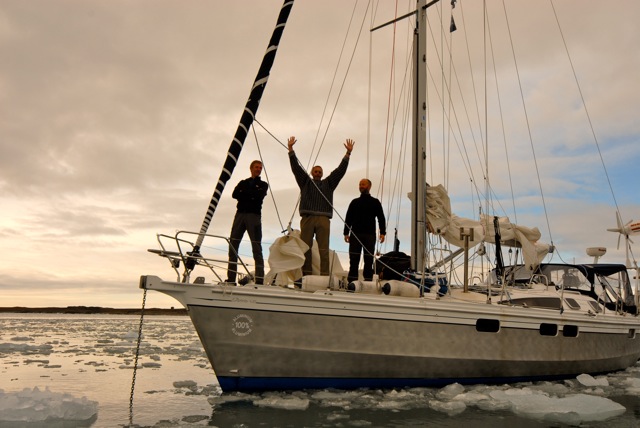 I had three experienced sailors, climbers and mountain rescuers with me on board Explore North, an Ovni 435: Espen Nilsen. Bengt Flygel Nilsfors and Tor Andre Skjelbakken. We ran a 4×4 watch system and exactly two days later with half and half sailing and motor sailing we went into Sørhamna on Bear Island.

Here there was a Colin Archer, who had started from Tromsø two days before us at anchor. They had just arrived, but since it was a little swell into the harbor, we moved around the corner and into Kvalrossbukta.

Here lie the remains of an old whaling station spread out over the beautiful beach. Two hours with some exploring and walking we were sailing north again.

Another day later, Bengt was standing ice watch the bow as we slid into Hornsund, the first fjord on the southwest coast of Svalbard. Wind was from the north and Isbjørnhamna, outside the Polish research station, gave the best hold for the anchor. 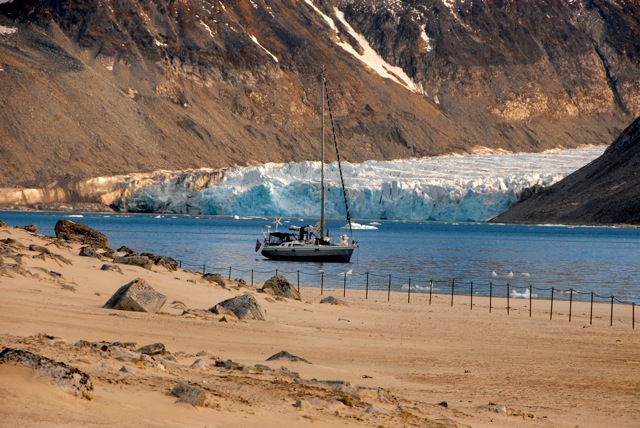 Only 50 meters from us there was a boat from St. Johns in the Caribbean. They were waiting for the right weather window to get south, and had ice watch to keep the growlers and icebergs away from the gel coat. We took it much more easy with our aluminum hull, but when it was time for a hike in the hills only two went ashore. The other two were back in the boat to fend of the biggest lumps of ice so that they didn’t break loose our anchor.

The next day, went to the Bellsund and the Van Keulenfjorden. In the bay Fleur de Lys we found shelter, good anchor hold and a perfect view of the glacier at the end of the fjord. A trip on shore under the midnight sun was mandatory. The midnight sun on Svalbard is shining from April 20 to August 23. On the beach there are three old whaleboats with the bottom up that is in surprisingly good condition, and a RIB that was not quite so good condition. A polar bear had left claw marks on the rubber and deflated the boat.

There is estimated 3000 Polar Bears in the Svalbard area, and most of them are in the North East part of the island. Bears that venture as far south as Bellsund in the summertime have a hard time finding enough food.

We finished the day with a nightcap and went to bed. We didn’t get many hours of sleep.
We are on the beach. Get out. Get out.

Espen woke up at 4:30 of the sound of the stern hitting the beach. Before we managed to get on our clothes on we where sideways on the beach. We where knee deep in ice water in a useless effort to push us out of the misery. There was no way we could budge the 12.5 tons of boat against wind and small choppy waves. The 4 HP powered dinghy was just as useless to get us in to deeper water. 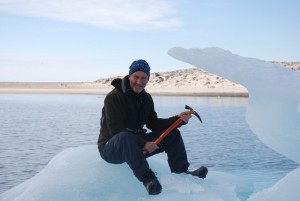 The only thing we could do was to get on board, get some heat in our legs and wait for the tide to run out. Never have we all needed a drink more than at 5:30 in the morning. We downed the rum accompanied to the sound of waves smashing in to the hull.

We slept well, except for Bengt, he remained awake on polar bear watch.

We needed the dinghy to get the anchor and all the lines out. It would have been a disaster if the bear had destroyed our dinghy.

At 12, there was a meter down to the water. We checked the tide table and my nausea rose faster than the tide went out. The next high tide was 10 centimeters lower than the previous one. The next three weeks it would only be lower and lower high tide. A glance into the fjord almost made me deliver the breakfast. The ice from the Nathorst glacier was being blown towards us at an alarming pace. There wasn’t much going our way today.

One of the reasons we had for sailing to Svalbard was to get a sense of remoteness and the adventure of being totally self-sufficient. The feeling of remoteness and not being able to cope on our own was over whelming. Until a French twomasted sailing yacht came sailing in to the bay.

– Sailboat on your way in to Fleur de Lys, this is Explore North on the beach, I called him on the VHF.

Albarquel was sailing with tourists and had only planned to stop an hour in Fleur de Lys, but after hearing about our predicament the skipper decided to wait for high tide and assist us. My stomach settled a little.

An hour before high tide the French skipper came on the VHF:
– Explore the North this is Albarquel. A Polar Bear is on the way towards you. Expect him in the next hour.

– Just what we needed, we thought, as we were still high and dry. 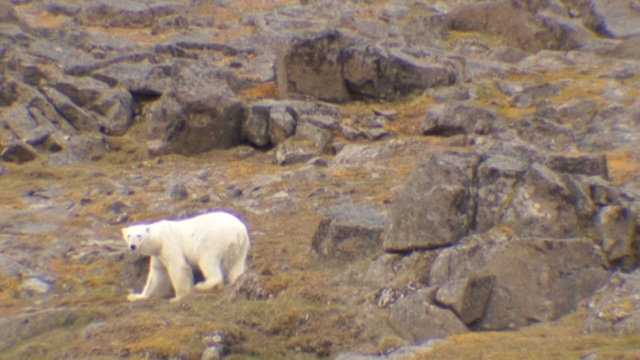 Our Polar Bear guard on deck was further intensified. As we dug out the gravel in front of the boat, rowed out to the towing line to Albarquel, pulled out the anchor and did everything we could to be prepared for maximum high tide we had constant Polar Bear guard with a rifle on the deck.

This bear had found himself a reindeer carcass in the bay just south of us, but he was obviously finished with that. Now he was heading for us at an easy pace. At full speed a Polar Bear can cover 40 meter in 1 second. We didn’t want him to close as we where sitting ducks.

50 meters from the boat Bengt shoot a signal pen flare just to the right of the wandering bear. Curious as he is he jumps towards it, but pulls back when he gets the smell of phosphorus. I shoot right in front of him so that he is spayed with stones.

The Polar Bear thinks for a few seconds, and then begins to walk away. It turns a few times to look at us, but soon disappears over the hill. We are now very ready to get away from the beach.

Water tanks emptied, the life raft and100 liters of diesel and 100 liters of water in the extra tanks is put on board the dinghy to lighten the boat. The dinghy is then secured between the boat and water to keep it from a possible returning Polar Bear.

The guests aboard Albarquel really get value for money as the watch in safe distance: A towing operation and a close encounter with a Polar Bear. We struggle hard to get of the beach.

– A little bit more power, please.
– This is max power.

The tow had already broken once, but we had moved 50 centimeter. Now we moved the two lines coming out from the 250 m long tow to the bow.

Slowly Explore North starts to turn on all the small round rocks, gets in to the water and, then increases speed and we are floating. The stretched in the towrope alone slingshots us in to deeper water.

We are off. Thank you. Thank you, I shout over the VHF, but I can probably hear me without it.

The feeling of relief is overwhelming. Smiles all the way around. We have managed to get us out of a difficult situation that we really shouldn’t have been in. But I guess that is called learning.

None of the knots we have used to get the long tow will come open. All must be cut. The knots are set in stone by the violent forces. The skipper of Albarquel got one of our ropes as thanks for his help as a compensation for the rope that broke. It is not much. But he very reluctantly takes it. He is a sailor of the old school that does what it takes to help other sailors in trouble. Next time it could be him, and then you need to find friendly souls. Especially when you are Svalbard.

The boat survived without a scratch and we were soon on our way to the next port. Three weeks of adventure lies ahead. But we are hoping for a little less drama.

Learning Points
If the wind direction shifts just a little, you need to check that the anchor still has hold.

Use anchor watch on GPS or plotter. If you do not have it and are unsure of the anchor: Use the alarm clock active during the night
If you have a lifting keel: Keep it down when you are at anchor. Had we had that, we would have stopped long before the beach, pumped it up and motored in to deeper water.
The consequences of all your decisions in Svalbard or other Polar regions are infinitely greater than when cruising along the mainland. Worst-case scenario is that the boat had to be left on the beach for weeks.
Consider worst-case scenario for all situations, and prepare accordingly
Captions:
The bear was 50 yards away when we shot with a signal pen and a rifle to scare it away.

We were safe on the beach.

While we wait for the tide there was not much else to do but hope.

Perfect night before it was a small nightmare morning.

We were good at swaying. Until the wind turned.

Jon Amtrup is a writer, Edior of www.thesailnews.com, author of The Harbour Guide Bergen-Kirkenes, Sail to Svalbard and runs the adventure company Explore North in Norway, and can be reached on jon@explorenorth.no.